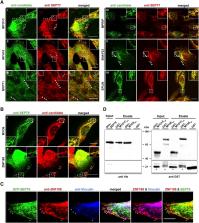 Septins regulate the organization of the actin cytoskeleton, vesicle transport and fusion, chromosome alignment and segregation, and cytokinesis in mammalian cells. SEPT9 is part of the core septin hetero-octamer in human cells which is composed of SEPT2, SEPT6, SEPT7, and SEPT9. SEPT9 has been linked to a variety of intracellular functions as well as to diseases and diverse types of cancer. A targeted high-throughput approach to systematically identify the interaction partners of SEPT9 has not yet been performed. We applied a quantitative proteomics approach to establish an interactome of SEPT9 in human fibroblast cells. Among the newly identified interaction partners were members of the myosin family and LIM domain containing proteins. Fluorescence microscopy of SEPT9 and its interaction partners provides additional evidence that SEPT9 might participate in vesicle transport from and to the plasma membrane as well as in the attachment of actin stress fibers to cellular adhesions.

Myosin VI is an actin-based motor that moves backwards.

D Safer,  Matthew S. Cain,  Christopher P. L. H. Chen … (1999)
Myosins and kinesins are molecular motors that hydrolyse ATP to track along actin filaments and microtubules, respectively. Although the kinesin family includes motors that move towards either the plus or minus ends of microtubules, all characterized myosin motors move towards the barbed (+) end of actin filaments. Crystal structures of myosin II (refs 3-6) have shown that small movements within the myosin motor core are transmitted through the 'converter domain' to a 'lever arm' consisting of a light-chain-binding helix and associated light chains. The lever arm further amplifies the motions of the converter domain into large directed movements. Here we report that myosin VI, an unconventional myosin, moves towards the pointed (-) end of actin. We visualized the myosin VI construct bound to actin using cryo-electron microscopy and image analysis, and found that an ADP-mediated conformational change in the domain distal to the motor, a structure likely to be the effective lever arm, is in the opposite direction to that observed for other myosins. Thus, it appears that myosin VI achieves reverse-direction movement by rotating its lever arm in the opposite direction to conventional myosin lever arm movement.

Mammalian SEPT2 is required for scaffolding nonmuscle myosin II and its kinases.

William S. Trimble,  Jihoon Joo,  Mark C Surka (2007)
Mammalian septin SEPT2 belongs to a conserved family of filamentous GTPases that are associated with actin stress fibers in interphase cells and the contractile ring in dividing cells. Although SEPT2 is essential for cytokinesis, its role in this process remains undefined. Here, we report that SEPT2 directly binds nonmuscle myosin II (myosin II), and this association is important for fully activating myosin II in interphase and dividing cells. Inhibition of the SEPT2-myosin II interaction in interphase cells results in loss of stress fibers, while in dividing cells this causes instability of the ingressed cleavage furrow and dissociation of the myosin II from the Rho-activated myosin kinases ROCK and citron kinase. We propose that SEPT2-containing filaments provide a molecular platform for myosin II and its kinases to ensure the full activation of myosin II that is necessary for the final stages of cytokinesis.

J. Alvarado,  Yannick Azou-Gros,  A Kress … (2014)
Animal cell cytokinesis requires a contractile ring of crosslinked actin filaments and myosin motors. How contractile rings form and are stabilized in dividing cells remains unclear. We address this problem by focusing on septins, highly conserved proteins in eukaryotes whose precise contribution to cytokinesis remains elusive. We use the cleavage of the Drosophila melanogaster embryo as a model system, where contractile actin rings drive constriction of invaginating membranes to produce an epithelium in a manner akin to cell division. In vivo functional studies show that septins are required for generating curved and tightly packed actin filament networks. In vitro reconstitution assays show that septins alone bundle actin filaments into rings, accounting for the defects in actin ring formation in septin mutants. The bundling and bending activities are conserved for human septins, and highlight unique functions of septins in the organization of contractile actomyosin rings.