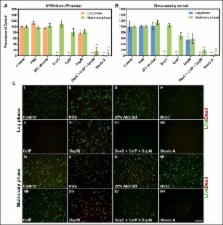 Lyme disease is a tick-borne multisystemic disease caused by Borrelia burgdorferi. Administering antibiotics is the primary treatment for this disease; however, relapse often occurs when antibiotic treatment is discontinued. The reason for relapse remains unknown, but recent studies suggested the possibilities of the presence of antibiotic resistant Borrelia persister cells and biofilms.

In this study, we evaluated the effectiveness of whole leaf Stevia extract against B. burgdorferi spirochetes, persisters, and biofilm forms in vitro. The susceptibility of the different forms was evaluated by various quantitative techniques in addition to different microscopy methods. The effectiveness of Stevia was compared to doxycycline, cefoperazone, daptomycin, and their combinations. Our results demonstrated that Stevia had significant effect in eliminating B. burgdorferi spirochetes and persisters. Subculture experiments with Stevia and antibiotics treated cells were established for 7 and 14 days yielding, no and 10% viable cells, respectively compared to the above-mentioned antibiotics and antibiotic combination. When Stevia and the three antibiotics were tested against attached biofilms, Stevia significantly reduced B. burgdorferi forms. Results from this study suggest that a natural product such as Stevia leaf extract could be considered as an effective agent against B. burgdorferi.

Of ticks, mice and men: understanding the dual-host lifestyle of Lyme disease spirochaetes.

Justin D. Radolf,  Melissa J. Caimano,  Brian Stevenson … (2012)
In little more than 30 years, Lyme disease, which is caused by the spirochaete Borrelia burgdorferi, has risen from relative obscurity to become a global public health problem and a prototype of an emerging infection. During this period, there has been an extraordinary accumulation of knowledge on the phylogenetic diversity, molecular biology, genetics and host interactions of B. burgdorferi. In this Review, we integrate this large body of information into a cohesive picture of the molecular and cellular events that transpire as Lyme disease spirochaetes transit between their arthropod and vertebrate hosts during the enzootic cycle.

B. Kaplan (2011)
Surface-attached colonies of bacteria known as biofilms play a major role in the pathogenesis of device-related infections. Biofilm colonies are notorious for their resistance to suprainhibitory concentrations of antibiotics. Numerous studies have shown that subminimal inhibitory concentrations of some antibiotics can act as agonists of bacterial biofilm formation in vitro, a process that may have clinical relevance. This article reviews studies demonstrating that low-dose antibiotics induce bacterial biofilm formation. These studies have provided important information about the regulation of biofilm formation and the signaling pathways involved in global gene regulation in response to cell stressors. It is still unclear whether antibiotic-induced biofilm formation contributes to the inconsistent success of antimicrobial therapy for device infections.

Effects of stevia, aspartame, and sucrose on food intake, satiety, and postprandial glucose and insulin levels.

Jeff D. Williamson,  Hongmei Han,  Paula Geiselman … (2010)
Consumption of sugar-sweetened beverages may be one of the dietary causes of metabolic disorders, such as obesity. Therefore, substituting sugar with low calorie sweeteners may be an efficacious weight management strategy. We tested the effect of preloads containing stevia, aspartame, or sucrose on food intake, satiety, and postprandial glucose and insulin levels. 19 healthy lean (BMI=20.0-24.9) and 12 obese (BMI=30.0-39.9) individuals 18-50 years old completed three separate food test days during which they received preloads containing stevia (290kcal), aspartame (290kcal), or sucrose (493kcal) before the lunch and dinner meal. The preload order was balanced, and food intake (kcal) was directly calculated. Hunger and satiety levels were reported before and after meals, and every hour throughout the afternoon. Participants provided blood samples immediately before and 20min after the lunch preload. Despite the caloric difference in preloads (290kcal vs. 493kcal), participants did not compensate by eating more at their lunch and dinner meals when they consumed stevia and aspartame versus sucrose in preloads (mean differences in food intake over entire day between sucrose and stevia=301kcal, p<.01; aspartame=330kcal, p<.01). Self-reported hunger and satiety levels did not differ by condition. Stevia preloads significantly reduced postprandial glucose levels compared to sucrose preloads (p<.01), and postprandial insulin levels compared to both aspartame and sucrose preloads (p<.05). When consuming stevia and aspartame preloads, participants did not compensate by eating more at either their lunch or dinner meal and reported similar levels of satiety compared to when they consumed the higher calorie sucrose preload. Published by Elsevier Ltd.