The Association of Red Blood Cell Distribution Width to Platelet Count Ratio and 28-Day Mortality of Patients with Sepsis: A Retrospective Cohort Study 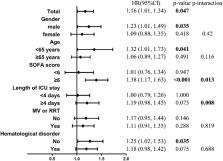 Sepsis is a life-threatening and inflammatory disease with high morbidity and mortality. Red blood cell distribution width to platelet count ratio (RPR) was known as an inflammatory biomarker and was related to poor outcomes of various diseases.

This study was intended to explore the association between RPR and mortality of sepsis patients.

A retrospective cohort study was undertaken in patients with sepsis, and the data were collected from a public database called Medical Information Mart for Intensive Care III (MIMIC-III). The primary outcome was 28-day mortality while the secondary outcomes were 90-day mortality and ICU mortality. Multivariable regression analyses, as well as interaction and stratified analyses, were conducted to investigate the relation between RPR and sepsis mortality.

RPR is a novel biomarker that indicates poor prognosis of sepsis patients. Clinicians are required to pay more attention to those patients with high RPR.

Mervyn Singer,  Clifford S Deutschman,  Christopher Warren Seymour … (2016)
Definitions of sepsis and septic shock were last revised in 2001. Considerable advances have since been made into the pathobiology (changes in organ function, morphology, cell biology, biochemistry, immunology, and circulation), management, and epidemiology of sepsis, suggesting the need for reexamination.

Global, regional, and national sepsis incidence and mortality, 1990–2017: analysis for the Global Burden of Disease Study

Kristina Rudd,  Sarah Charlotte Johnson,  Kareha M Agesa … (2020)
Summary Background Sepsis is life-threatening organ dysfunction due to a dysregulated host response to infection. It is considered a major cause of health loss, but data for the global burden of sepsis are limited. As a syndrome caused by underlying infection, sepsis is not part of standard Global Burden of Diseases, Injuries, and Risk Factors Study (GBD) estimates. Accurate estimates are important to inform and monitor health policy interventions, allocation of resources, and clinical treatment initiatives. We estimated the global, regional, and national incidence of sepsis and mortality from this disorder using data from GBD 2017. Methods We used multiple cause-of-death data from 109 million individual death records to calculate mortality related to sepsis among each of the 282 underlying causes of death in GBD 2017. The percentage of sepsis-related deaths by underlying GBD cause in each location worldwide was modelled using mixed-effects linear regression. Sepsis-related mortality for each age group, sex, location, GBD cause, and year (1990–2017) was estimated by applying modelled cause-specific fractions to GBD 2017 cause-of-death estimates. We used data for 8·7 million individual hospital records to calculate in-hospital sepsis-associated case-fatality, stratified by underlying GBD cause. In-hospital sepsis-associated case-fatality was modelled for each location using linear regression, and sepsis incidence was estimated by applying modelled case-fatality to sepsis-related mortality estimates. Findings In 2017, an estimated 48·9 million (95% uncertainty interval [UI] 38·9–62·9) incident cases of sepsis were recorded worldwide and 11·0 million (10·1–12·0) sepsis-related deaths were reported, representing 19·7% (18·2–21·4) of all global deaths. Age-standardised sepsis incidence fell by 37·0% (95% UI 11·8–54·5) and mortality decreased by 52·8% (47·7–57·5) from 1990 to 2017. Sepsis incidence and mortality varied substantially across regions, with the highest burden in sub-Saharan Africa, Oceania, south Asia, east Asia, and southeast Asia. Interpretation Despite declining age-standardised incidence and mortality, sepsis remains a major cause of health loss worldwide and has an especially high health-related burden in sub-Saharan Africa. Funding The Bill & Melinda Gates Foundation, the National Institutes of Health, the University of Pittsburgh, the British Columbia Children's Hospital Foundation, the Wellcome Trust, and the Fleming Fund.