Functional Neuroanatomy of the Noradrenergic Locus Coeruleus: Its Roles in the Regulation of Arousal and Autonomic Function Part II: Physiological and Pharmacological Manipulations and Pathological Alterations of Locus Coeruleus Activity in Humans 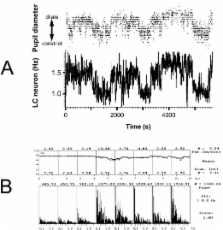 The locus coeruleus (LC), the major noradrenergic nucleus of the brain, gives rise to fibres innervating most structures of the neuraxis. Recent advances in neuroscience have helped to unravel the neuronal circuitry controlling a number of physiological functions in which the LC plays a central role. Two such functions are the regulation of arousal and autonomic activity, which are inseparably linked largely via the involvement of the LC. Alterations in LC activity due to physiological or pharmacological manipulations or pathological processes can lead to distinct patterns of change in arousal and autonomic function. Physiological manipulations considered here include the presentation of noxious or anxiety-provoking stimuli and extremes in ambient temperature. The modification of LC-controlled functions by drug administration is discussed in detail, including drugs which directly modify the activity of LC neurones (e.g., via autoreceptors, storage, reuptake) or have an indirect effect through modulating excitatory or inhibitory inputs. The early vulnerability of the LC to the ageing process and to neurodegenerative disease (Parkinson’s and Alzheimer’s diseases) is of considerable clinical significance. In general, physiological manipulations and the administration of stimulant drugs, α 2-adrenoceptor antagonists and noradrenaline uptake inhibitors increase LC activity and thus cause heightened arousal and activation of the sympathetic nervous system. In contrast, the administration of sedative drugs, including α 2-adrenoceptor agonists, and pathological changes in LC function in neurodegenerative disorders and ageing reduce LC activity and result in sedation and activation of the parasympathetic nervous system.

T Bal,  D McCormick (1996)
Thalamocortical activity exhibits two distinct states: (a) synchronized rhythmic activity in the form of delta, spindle, and other slow waves during EEG-synchronized sleep and (b) tonic activity during waking and rapid-eye-movement sleep. Spindle waves are generated largely through a cyclical interaction between thalamocortical and thalamic reticular neurons involving both the intrinsic membrane properties of these cells and their anatomical interconnections. Specific alterations in the interactions between these cells can result in the generation of paroxysmal events resembling absence seizures in children. The release of several different neurotransmitters from the brain stem, hypothalamus, basal forebrain, and cerebral cortex results in a depolarization of thalamocortical and thalamic reticular neurons and an enhanced excitability in many cortical pyramidal cells, thereby suppressing the generation of sleep rhythms and promoting a state that is conducive to sensory processing and cognition.

F BLOOM,  Gary Aston-Jones (1981)
Spontaneous discharge of norepinephrine-containing locus coeruleus (NE-LC) neurons was examined during the sleep-walking cycle (S-WC) in behaving rats. Single unit and multiple unit extracellular recordings yielded a consistent set of characteristic discharge properties. (1) Tonic discharge co-varied with stages of the S-WC, being highest during waking, lower during slow wave sleep, and virtually absent during paradoxical sleep. (2) Discharge anticipated S-WC stages as well as phasic cortical activity, such as spindles, during slow wave sleep. (3) Discharge decreased within active waking during grooming and sweet water consumption. (4) Bursts of impulses accompanied spontaneous or sensory-evoked interruptions of sleep, grooming, consumption, or other such ongoing behavior. (5) These characteristic discharge properties were topographically homogeneous for recordings throughout the NE-LC. (6) Phasic robust activity was synchronized markedly among neurons in multiple unit populations. (7) Field potentials occurred spontaneously in the NE-LC and were synchronized with bursts of unit activity from the same electrodes. (8) Field potentials became dissociated from unit activity during paradoxical sleep, exhibiting their highest rates in the virtual absence of impulses. These results are generally consistent with previous proposals that the NE-LC system is involved in regulating cortical and behavioral arousal. On the basis of the present data and those described in the following report (Aston-Jones, G., and F. E. Bloom (1981) J. Neurosci.1: 887-900), we conclude that these neurons may mediate a specific function within the general arousal framework. In brief, the NE-LC system may globally bias the responsiveness of target neurons and thereby influence overall behavioral orientation.

This is an open access article distributed under the terms of the Creative Commons Attribution License ( http://creativecommons.org/licenses/by/2.5/) which permits unrestrictive use, distribution, and reproduction in any medium, provided the original work is properly cited.