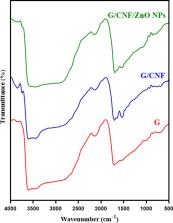 The casting method was employed to prepare gelatin‐based nanocomposite films containing different concentrations of cellulose nanofiber (CNF) as a reinforcement filler (2.5%, 5%, and 7.5% w/w of gelatin) as well as zinc oxide nanoparticles (ZnO NPs) as an antimicrobial agent (1%, 3%, 5%, and 7% w/w of gelatin). The results showed that the incorporation of 5% CNFs (optimum concentration) significantly boosted the films' stiffness (YM; by 47%) and strength (TS; by 72%) but decreased its flexibility (EAB; by 28%), water vapor permeability, and moisture absorption. The best G/CNF film antibacterial activity was provided by the 5% concentration of ZnO NPs according to the disk diffusion assay; Gram‐positive bacteria were inhibited significantly more than Gram‐negative bacteria. The antimicrobial efficacy of the G/CNF/ZnO NPs film as a food packaging material was assessed via counts of Staphylococcus aureus and Pseudomonas fluorescens inoculated on chicken fillets (as a food model) in the treatment (G/5% CNF/5% ZnO) and control groups (plastic bag). The antibacterial film led to a significant reduction in the bacterial load of the chicken fillets ( p < .05), especially against the Gram‐positive strain. This study illustrated that G/CNF/ZnO NPs films can be utilized as active packaging to prolong the shelf life of different perishable foods such as meat.

The optimum concentrations of CNF (5% from physicomechanical characteristics and water resistance) and ZnO NPs (5% from the disk diffusion method) were selected as a food packaging for counts of Staphylococcus aureus and Pseudomonas fluorescens inoculated on chicken fillets.

The antimicrobial activity of nanoparticles: present situation and prospects for the future

Linlin Wang,  Chen Hu,  Longquan Shao (2017)
Nanoparticles (NPs) are increasingly used to target bacteria as an alternative to antibiotics. Nanotechnology may be particularly advantageous in treating bacterial infections. Examples include the utilization of NPs in antibacterial coatings for implantable devices and medicinal materials to prevent infection and promote wound healing, in antibiotic delivery systems to treat disease, in bacterial detection systems to generate microbial diagnostics, and in antibacterial vaccines to control bacterial infections. The antibacterial mechanisms of NPs are poorly understood, but the currently accepted mechanisms include oxidative stress induction, metal ion release, and non-oxidative mechanisms. The multiple simultaneous mechanisms of action against microbes would require multiple simultaneous gene mutations in the same bacterial cell for antibacterial resistance to develop; therefore, it is difficult for bacterial cells to become resistant to NPs. In this review, we discuss the antibacterial mechanisms of NPs against bacteria and the factors that are involved. The limitations of current research are also discussed.

Nanoparticle adhesion to the cell membrane and its effect on nanoparticle uptake efficiency.

Anna Leśniak,  Anna Salvati,  Marek Radomski … (2013)
The interactions between nanosized particles and living systems are commonly mediated by what adsorbs to the nanoparticle in the biological environment, its biomolecular corona, rather than the pristine surface. Here, we characterize the adhesion toward the cell membrane of nanoparticles of different material and size and study how this is modulated by the presence or absence of a corona on the nanoparticle surface. The results are corroborated with adsorption to simple model supported lipid bilayers using a quartz crystal microbalance. We conclude that the adsorption of proteins on the nanoparticle surface strongly reduces nanoparticle adhesion in comparison to what is observed for the bare material. Nanoparticle uptake is described as a two-step process, where the nanoparticles initially adhere to the cell membrane and subsequently are internalized by the cells via energy-dependent pathways. The lowered adhesion in the presence of proteins thereby causes a concomitant decrease in nanoparticle uptake efficiency. The presence of a biomolecular corona may confer specific interactions between the nanoparticle-corona complex and the cell surface including triggering of regulated cell uptake. An important effect of the corona is, however, a reduction in the purely unspecific interactions between the bare material and the cell membrane, which in itself disregarding specific interactions, causes a decrease in cellular uptake. We suggest that future nanoparticle-cell studies include, together with characterization of size, charge, and dispersion stability, an evaluation of the adhesion properties of the material to relevant membranes.