Phylogenetic classification of Cordyceps and the clavicipitaceous fungi 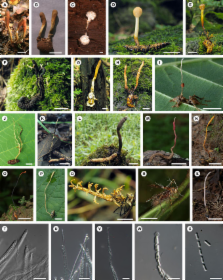 Cordyceps, comprising over 400 species, was historically classified in the Clavicipitaceae, based on cylindrical asci, thickened ascus apices and filiform ascospores, which often disarticulate into part-spores. Cordyceps was characterized by the production of well-developed often stipitate stromata and an ecology as a pathogen of arthropods and Elaphomyces with infrageneric classifications emphasizing arrangement of perithecia, ascospore morphology and host affiliation. To refine the classification of Cordyceps and the Clavicipitaceae, the phylogenetic relationships of 162 taxa were estimated based on analyses consisting of five to seven loci, including the nuclear ribosomal small and large subunits ( nrSSU and nrLSU), the elongation factor 1α ( tef1), the largest and the second largest subunits of RNA polymerase II ( rpb1 and rpb2), β-tubulin ( tub), and mitochondrial ATP6 ( atp6). Our results strongly support the existence of three clavicipitaceous clades and reject the monophyly of both Cordyceps and Clavicipitaceae. Most diagnostic characters used in current classifications of Cordyceps (e.g., arrangement of perithecia, ascospore fragmentation, etc.) were not supported as being phylogenetically informative; the characters that were most consistent with the phylogeny were texture, pigmentation and morphology of stromata. Therefore, we revise the taxonomy of Cordyceps and the Clavicipitaceae to be consistent with the multi-gene phylogeny. The family Cordycipitaceae is validated based on the type of Cordyceps, C. militaris, and includes most Cordyceps species that possess brightly coloured, fleshy stromata. The new family Ophiocordycipitaceae is proposed based on Ophiocordyceps Petch, which we emend. The majority of species in this family produce darkly pigmented, tough to pliant stromata that often possess aperithecial apices. The new genus Elaphocordyceps is proposed for a subclade of the Ophiocordycipitaceae, which includes all species of Cordyceps that parasitize the fungal genus Elaphomyces and some closely related species that parasitize arthropods. The family Clavicipitaceae s. s. is emended and includes the core clade of grass symbionts (e.g., Balansia, Claviceps, Epichloë, etc.), and the entomopathogenic genus Hypocrella and relatives. In addition, the new genus Metacordyceps is proposed for Cordyceps species that are closely related to the grass symbionts in the Clavicipitaceae s. s. Metacordyceps includes teleomorphs linked to Metarhizium and other closely related anamorphs. Two new species are described, and lists of accepted names for species in Cordyceps, Elaphocordyceps, Metacordyceps and Ophiocordyceps are provided.

Claude Roux,  François Lutzoni,  Valérie Reeb (2004)
Despite the recent progress in molecular phylogenetics, many of the deepest relationships among the main lineages of the largest fungal phylum, Ascomycota, remain unresolved. To increase both resolution and support on a large-scale phylogeny of lichenized and non-lichenized ascomycetes, we combined the protein coding-gene RPB2 with the traditionally used nuclear ribosomal genes SSU and LSU. Our analyses resulted in the naming of the new subclasses Acarosporomycetidae and Ostropomycetidae, and the new class Lichinomycetes, as well as the establishment of the phylogenetic placement and novel circumscription of the lichen-forming fungi family Acarosporaceae. The delimitation of this family has been problematic over the past century, because its main diagnostic feature, true polyspory (numerous spores issued from multiple post-meiosis mitoses) with over 100 spores per ascus, is probably not restricted to the Acarosporaceae. This observation was confirmed by our reconstruction of the origin and evolution of this form of true polyspory using maximum likelihood as the optimality criterion. The various phylogenetic analyses carried out on our data sets allowed us to conclude that: (1) the inclusion of phylogenetic signal from ambiguously aligned regions into the maximum parsimony analyses proved advantageous in reconstructing phylogeny; however, when more data become available, Bayesian analysis using different models of evolution is likely to be more efficient; (2) neighbor-joining bootstrap proportions seem to be more appropriate in detecting topological conflict between data partitions of large-scale phylogenies than posterior probabilities; and (3) Bayesian bootstrap proportion provides a compromise between posterior probability outcomes (i.e., higher accuracy, but with a higher number of significantly supported wrong internodes) vs. maximum likelihood bootstrap proportion outcomes (i.e., lower accuracy, with a lower number of significantly supported wrong internodes).

John Wiens (2003)
The problem of missing data is often considered to be the most important obstacle in reconstructing the phylogeny of fossil taxa and in combining data from diverse characters and taxa for phylogenetic analysis. Empirical and theoretical studies show that including highly incomplete taxa can lead to multiple equally parsimonious trees, poorly resolved consensus trees, and decreased phylogenetic accuracy. However, the mechanisms that cause incomplete taxa to be problematic have remained unclear. It has been widely assumed that incomplete taxa are problematic because of the proportion or amount of missing data that they bear. In this study, I use simulations to show that the reduced accuracy associated with including incomplete taxa is caused by these taxa bearing too few complete characters rather than too many missing data cells. This seemingly subtle distinction has a number of important implications. First, the so-called missing data problem for incomplete taxa is, paradoxically, not directly related to their amount or proportion of missing data. Thus, the level of completeness alone should not guide the exclusion of taxa (contrary to common practice), and these results may explain why empirical studies have sometimes found little relationship between the completeness of a taxon and its impact on an analysis. These results also (1) suggest a more effective strategy for dealing with incomplete taxa, (2) call into question a justification of the controversial phylogenetic supertree approach, and (3) show the potential for the accurate phylogenetic placement of highly incomplete taxa, both when combining diverse data sets and when analyzing relationships of fossil taxa.

You are free to share–to copy, distribute and transmit the work, under the following conditions:

Attribution:  You must attribute the work in the manner specified by the author or licensor (but not in any way that suggests that they endorse you or your use of the work).

Non-commercial:  You may not use this work for commercial purposes.

No derivative works:  You may not alter, transform, or build upon this work.

For any reuse or distribution, you must make clear to others the license terms of this work, which can be found at http://creativecommons.org/licenses/by-nc-nd/3.0/legalcode. Any of the above conditions can be waived if you get permission from the copyright holder. Nothing in this license impairs or restricts the author's moral rights.