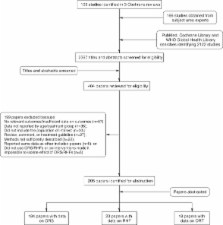 Background Most diarrhoeal deaths can be prevented through the prevention and treatment of dehydration. Oral rehydration solution (ORS) and recommended home fluids (RHFs) have been recommended since 1970s and 1980s to prevent and treat diarrhoeal dehydration. We sought to estimate the effects of these interventions on diarrhoea mortality in children aged <5 years.

Methods We conducted a systematic review to identify studies evaluating the efficacy and effectiveness of ORS and RHFs and abstracted study characteristics and outcome measures into standardized tables. We categorized the evidence by intervention and outcome, conducted meta-analyses for all outcomes with two or more data points and graded the quality of the evidence supporting each outcome. The CHERG Rules for Evidence Review were used to estimate the effectiveness of ORS and RHFs against diarrhoea mortality.

WHO estimates of the causes of death in children.

Jennifer Bryce,  Cynthia Boschi-Pinto,  Kenji Shibuya … (2015)
Child survival efforts can be effective only if they are based on accurate information about causes of deaths. Here, we report on a 4-year effort by WHO to improve the accuracy of this information. WHO established the external Child Health Epidemiology Reference Group (CHERG) in 2001 to develop estimates of the proportion of deaths in children younger than age 5 years attributable to pneumonia, diarrhoea, malaria, measles, and the major causes of death in the first 28 days of life. Various methods, including single-cause and multi-cause proportionate mortality models, were used. The role of undernutrition as an underlying cause of death was estimated in collaboration with CHERG. In 2000-03, six causes accounted for 73% of the 10.6 million yearly deaths in children younger than age 5 years: pneumonia (19%), diarrhoea (18%), malaria (8%), neonatal pneumonia or sepsis (10%), preterm delivery (10%), and asphyxia at birth (8%). The four communicable disease categories account for more than half (54%) of all child deaths. The greatest communicable disease killers are similar in all WHO regions with the exception of malaria; 94% of global deaths attributable to this disease occur in the Africa region. Undernutrition is an underlying cause of 53% of all deaths in children younger than age 5 years. Achievement of the millennium development goal of reducing child mortality by two-thirds from the 1990 rate will depend on renewed efforts to prevent and control pneumonia, diarrhoea, and undernutrition in all WHO regions, and malaria in the Africa region. In all regions, deaths in the neonatal period, primarily due to preterm delivery, sepsis or pneumonia, and birth asphyxia should also be addressed. These estimates of the causes of child deaths should be used to guide public-health policies and programmes.

Standards for CHERG reviews of intervention effects on child survival

Neff Walker,  Christa Fischer-Walker,  Jennifer Bryce … (2010)
Background The Lives Saved Tool (LiST) uses estimates of the effects of interventions on cause-specific child mortality as a basis for generating projections of child lives that could be saved by increasing coverage of effective interventions. Estimates of intervention effects are an essential element of LiST, and need to reflect the best available scientific evidence. This article describes the guidelines developed by the Child Health Epidemiology Reference Group (CHERG) that are applied by scientists conducting reviews of intervention effects for use in LiST. Methods The guidelines build on and extend those developed by the Cochrane Collaboration and the Working Group for Grading of Recommendations Assessment, Development and Evaluation (GRADE). They reflect the experience gained by the CHERG intervention review groups in conducting the reviews published in this volume, and will continue to be refined through future reviews. Presentation of the guidelines Expected products and guidelines are described for six steps in the CHERG intervention review process: (i) defining the scope of the review; (ii) conducting the literature search; (iii) extracting information from individual studies; (iv) assessing and summarizing the evidence; (v) translating the evidence into estimates of intervention effects and (vi) presenting the results. Conclusions The CHERG intervention reviews represent an ambitious effort to summarize existing evidence and use it as the basis for supporting sound public health decision making through LiST. These efforts will continue, and a similar process is now under way to assess intervention effects for reducing maternal mortality.

Paul Bryce,  C Victora,  O Fontaine … (1999)
In 1980, diarrhoea was the leading cause of child mortality, accounting for 4.6 million deaths annually. Efforts to control diarrhoea over the past decade have been based on multiple, potentially powerful interventions implemented more or less simultaneously. Oral rehydration therapy (ORT) was introduced in 1979 and rapidly became the cornerstone of programmes for the control of diarrhoeal diseases. We report on the strategy for controlling diarrhoea through case management, with special reference to ORT, and on the relationship between its implementation and reduced mortality. Population-based data on the coverage and quality of facility-based use of ORT are scarce, despite its potential importance in reducing mortality, especially for severe cases. ORT use rates during the 1980s are available for only a few countries. An improvement in the availability of data occurred in the mid-1990s. The study of time trends is hampered by the use of several different definitions of ORT. Nevertheless, the data show positive trends in diarrhoea management in most parts of the world. ORT is now given to the majority of children with diarrhoea. The annual number of deaths attributable to diarrhoea among children aged under 5 years fell from the estimated 4.6 million in 1980 to about 1.5 million today. Case studies in Brazil, Egypt, Mexico, and the Philippines confirm increases in the use of ORT which are concomitant with marked falls in mortality. In some countries, possible alternative explanations for the observed decline in mortality have been fairly confidently ruled out. Experience with ORT can provide useful guidance for child survival programmes. With adequate political will and financial support, cost-effective interventions other than that of immunization can be successfully delivered by national programmes. Furthermore, there are important lessons for evaluators. The population-based data needed to establish trends in health service delivery, outcomes and impact are not available in respect of diarrhoea, as is true for malaria, pneumonia and other major childhood conditions. Standard indicators and measurement methods should be established. Efforts to change existing global indicators should be firmly resisted. Support should be given for the continuing evaluation and documentation activities needed to guide future public health policies and programmes.

This is an Open Access article distributed under the terms of the Creative Commons Attribution Non-Commercial License ( http://creativecommons.org/licenses/by-nc/2.5/) which permits unrestricted non-commercial use, distribution, and reproduction in any medium, provided the original work is properly cited.