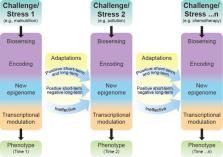 The global population of individuals over the age of 65 is growing at an unprecedented rate and is expected to reach 1.6 billion by 2050. Most older individuals are affected by multiple chronic diseases, leading to complex drug treatments and increased risk of physical and cognitive disability. Improving or preserving the health and quality of life of these individuals is challenging due to a lack of well‐established clinical guidelines. Physicians are often forced to engage in cycles of “trial and error” that are centered on palliative treatment of symptoms rather than the root cause, often resulting in dubious outcomes. Recently, geroscience challenged this view, proposing that the underlying biological mechanisms of aging are central to the global increase in susceptibility to disease and disability that occurs with aging. In fact, strong correlations have recently been revealed between health dimensions and phenotypes that are typical of aging, especially with autophagy, mitochondrial function, cellular senescence, and DNA methylation. Current research focuses on measuring the pace of aging to identify individuals who are “aging faster” to test and develop interventions that could prevent or delay the progression of multimorbidity and disability with aging. Understanding how the underlying biological mechanisms of aging connect to and impact longitudinal changes in health trajectories offers a unique opportunity to identify resilience mechanisms, their dynamic changes, and their impact on stress responses. Harnessing how to evoke and control resilience mechanisms in individuals with successful aging could lead to writing a new chapter in human medicine.

Finding a reference metric for the rate of biological aging is key to understanding the molecular nature of the aging process. Defining and validating this metric in humans opens the door to a new kind of medicine that will overcome the limitation of current disease definitions. We will then be able to approach health in a global perspective and bring life course preventative measures to the center of attention.

Cellular senescence in aging and age-related disease: from mechanisms to therapy.

Bennett Childs,  Matej Durik,  Darren J. Baker … (2015)
Cellular senescence, a process that imposes permanent proliferative arrest on cells in response to various stressors, has emerged as a potentially important contributor to aging and age-related disease, and it is an attractive target for therapeutic exploitation. A wealth of information about senescence in cultured cells has been acquired over the past half century; however, senescence in living organisms is poorly understood, largely because of technical limitations relating to the identification and characterization of senescent cells in tissues and organs. Furthermore, newly recognized beneficial signaling functions of senescence suggest that indiscriminately targeting senescent cells or modulating their secretome for anti-aging therapy may have negative consequences. Here we discuss current progress and challenges in understanding the stressors that induce senescence in vivo, the cell types that are prone to senesce, and the autocrine and paracrine properties of senescent cells in the contexts of aging and age-related diseases as well as disease therapy.

Laura García-Prat,  Marta Martinez-Vicente,  Eusebio Perdiguero … (2016)
During ageing, muscle stem-cell regenerative function declines. At advanced geriatric age, this decline is maximal owing to transition from a normal quiescence into an irreversible senescence state. How satellite cells maintain quiescence and avoid senescence until advanced age remains unknown. Here we report that basal autophagy is essential to maintain the stem-cell quiescent state in mice. Failure of autophagy in physiologically aged satellite cells or genetic impairment of autophagy in young cells causes entry into senescence by loss of proteostasis, increased mitochondrial dysfunction and oxidative stress, resulting in a decline in the function and number of satellite cells. Re-establishment of autophagy reverses senescence and restores regenerative functions in geriatric satellite cells. As autophagy also declines in human geriatric satellite cells, our findings reveal autophagy to be a decisive stem-cell-fate regulator, with implications for fostering muscle regeneration in sarcopenia.

Riccardo E Marioni,  Sonia Shah,  Allan McRae … (2015)
Background DNA methylation levels change with age. Recent studies have identified biomarkers of chronological age based on DNA methylation levels. It is not yet known whether DNA methylation age captures aspects of biological age. Results Here we test whether differences between people’s chronological ages and estimated ages, DNA methylation age, predict all-cause mortality in later life. The difference between DNA methylation age and chronological age (Δage) was calculated in four longitudinal cohorts of older people. Meta-analysis of proportional hazards models from the four cohorts was used to determine the association between Δage and mortality. A 5-year higher Δage is associated with a 21% higher mortality risk, adjusting for age and sex. After further adjustments for childhood IQ, education, social class, hypertension, diabetes, cardiovascular disease, and APOE e4 status, there is a 16% increased mortality risk for those with a 5-year higher Δage. A pedigree-based heritability analysis of Δage was conducted in a separate cohort. The heritability of Δage was 0.43. Conclusions DNA methylation-derived measures of accelerated aging are heritable traits that predict mortality independently of health status, lifestyle factors, and known genetic factors. Electronic supplementary material The online version of this article (doi:10.1186/s13059-015-0584-6) contains supplementary material, which is available to authorized users.