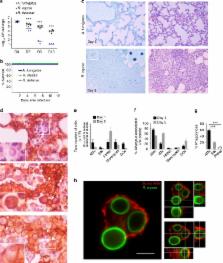 Mucormycosis is a life-threatening respiratory fungal infection that typically occurs in patients with abnormalities in iron metabolism. Here the authors show that iron restriction inside the phagosome of macrophages is an essential component of the host defense against Rhizopus, the main species causing mucormycosis.

Robert C. Kauffman,  Robert A Oster,  P Pappas … (2010)
Invasive fungal infections (IFIs) are a major cause of morbidity and mortality among organ transplant recipients. Multicenter prospective surveillance data to determine disease burden and secular trends are lacking. The Transplant-Associated Infection Surveillance Network (TRANSNET) is a consortium of 23 US transplant centers, including 15 that contributed to the organ transplant recipient dataset. We prospectively identified IFIs among organ transplant recipients from March, 2001 through March, 2006 at these sites. To explore trends, we calculated the 12-month cumulative incidence among 9 sequential cohorts. During the surveillance period, 1208 IFIs were identified among 1063 organ transplant recipients. The most common IFIs were invasive candidiasis (53%), invasive aspergillosis (19%), cryptococcosis (8%), non-Aspergillus molds (8%), endemic fungi (5%), and zygomycosis (2%). Median time to onset of candidiasis, aspergillosis, and cryptococcosis was 103, 184, and 575 days, respectively. Among a cohort of 16,808 patients who underwent transplantation between March 2001 and September 2005 and were followed through March 2006, a total of 729 IFIs were reported among 633 persons. One-year cumulative incidences of the first IFI were 11.6%, 8.6%, 4.7%, 4.0%, 3.4%, and 1.3% for small bowel, lung, liver, heart, pancreas, and kidney transplant recipients, respectively. One-year incidence was highest for invasive candidiasis (1.95%) and aspergillosis (0.65%). Trend analysis showed a slight increase in cumulative incidence from 2002 to 2005. We detected a slight increase in IFIs during the surveillance period. These data provide important insights into the timing and incidence of IFIs among organ transplant recipients, which can help to focus effective prevention and treatment strategies.

Brad Spellberg,  John Edwards,  Ashraf Ibrahim (2005)
Mucormycosis is a life-threatening fungal infection that occurs in immunocompromised patients. These infections are becoming increasingly common, yet survival remains very poor. A greater understanding of the pathogenesis of the disease may lead to future therapies. For example, it is now clear that iron metabolism plays a central role in regulating mucormycosis infections and that deferoxamine predisposes patients to mucormycosis by inappropriately supplying the fungus with iron. These findings raise the possibility that iron chelator therapy may be useful to treat the infection as long as the chelator does not inappropriately supply the fungus with iron. Recent data support the concept that high-dose liposomal amphotericin is the preferred monotherapy for mucormycosis. However, several novel therapeutic strategies are available. These options include combination therapy using lipid-based amphotericin with an echinocandin or with an azole (largely itraconazole or posaconazole) or with all three. The underlying principles of therapy for this disease remain rapid diagnosis, reversal of underlying predisposition, and urgent surgical debridement.

The cell wall: a carbohydrate armour for the fungal cell.

Jean Latgé (2007)
The cell wall is composed of a polysaccharide-based three-dimensional network. Considered for a long time as an inert exoskeleton, the cell wall is now seen as a dynamic structure that is continuously changing as a result of the modification of culture conditions and environmental stresses. Although the cell wall composition varies among fungal species, chemogenomic comparative analysis have led to a better understanding of the genes and mechanisms involved in the construction of the common central core composed of branched beta1,3 glucan-chitin. Because of its essential biological role, unique biochemistry and structural organization and the absence in mammalian cells of most of its constitutive components, the cell wall is an attractive target for the development of new antifungal agents. Genomic as well as drug studies have shown that the death of the fungus can result from inhibition of cell wall polysaccharide synthases. To date, only beta1,3 glucan synthase inhibitors have been launched clinically and many more targets remain to be explored.