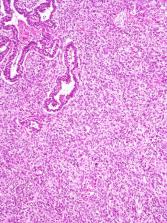 Pulmonary sarcomatoid carcinoma (PSC) is a heterogeneous category of primary lung cancer accounting from 0.3% to 3% of all primary lung malignancies. According to the most recent 2015 World Health Organization (WHO) classification, PSC includes several different variants of malignant epithelial tumors (carcinomas) histologically mimicking sarcomas showing or entirely lacking a conventional component of non-small cell lung cancer (NSCLC). Thus, this rare subheading of lung neoplasms includes pleomorphic carcinoma, spindle cell carcinoma, giant cell carcinoma, pulmonary blastoma, and carcinosarcoma. A diagnosis of PSC may be suspected on small biopsy or cytology, but commonly requires a surgical resection to reach a conclusive definition. The majority of patients with PSC consists of elderly, smoking men with a large, peripheral mass characterized by well-defined margins. However, presentation with a central, polypoid endobronchial lesion is well-documented, particularly in pleomorphic carcinoma and carcinosarcoma showing a squamous cell carcinoma component. As expected, PSC may pose diagnostic problems and immunohistochemistry is largely used when pathologists deal these tumors in routine practice. Indeed, PSC tends to overexpress molecules associated with the epithelial-to-mesenchymal transition, such as vimentin, but the panel of immunostains also includes epithelial markers (cytokeratins, EMA), TTF-1, p40 and negative markers (e.g., melanocytic, mesothelial and sarcoma-related primary antibodies). Although rare, PSC has increased their interest among oncologist community for different reasons: a. identification of the epithelial-to-mesenchymal phenomenon as a major mechanism of secondary resistance to tyrosine kinase inhibitors; b. over-expression of PD-L1 and effective treatment with immunotherapy; c. identification of c-MET exon 14 skipping mutation representing an effective target to crizotinib and other specific inhibitors. In this review, the feasibility of the diagnosis of PSC, its differential diagnosis and novel molecular findings characterizing this group of lung tumor are discussed.

p40 (ΔNp63) is superior to p63 for the diagnosis of pulmonary squamous cell carcinoma.