Calciphylaxis on bone scan: correlation between molecular and cross-sectional findings 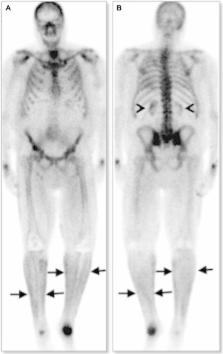 Calciphylaxis is a rare devastating medical condition commonly associated with end-stage renal disease and characterized by extensive microvascular calcifications. We describe a case of calciphylaxis presenting on Tc-99m MDP bone scan imaging with asymmetric radiotracer uptake within the lower extremities corresponding to extensive soft tissue calcifications on Computed tomography. Familiarity with the classic clinical presentation and imaging features of this rare entity may help its early identification and treatment.

Sagar Nigwekar,  Daniela Kroshinsky,  Rosalynn Nazarian … (2015)
Calciphylaxis is a rare but devastating condition that has continued to challenge the medical community since its early descriptions in the scientific literature many decades ago. It is predominantly seen in patients with chronic kidney failure treated with dialysis (uremic calciphylaxis) but is also described in patients with earlier stages of chronic kidney disease and with normal kidney function. In this review, we discuss the available medical literature regarding risk factors, diagnosis, and treatment of both uremic and nonuremic calciphylaxis. High-quality evidence for the evaluation and management of calciphylaxis is lacking at this time due to its rare incidence and poorly understood pathogenesis and the relative paucity of collaborative research efforts. We hereby provide a summary of recommendations developed by a multidisciplinary team for patients with calciphylaxis.

S. Soni,  B Leslie (2008)
A 51-year-old woman on peritoneal dialysis for chronic renal failure secondary to diabetic and nonsteroidal anti-inflammatory drug nephropathy was referred for a Tc-99m MDP bone scan to assess firm subcutaneous plaques in the sacral and gluteal regions. This showed extensive superficial tracer localization in the subcutaneous tissues as well as visceral tracer activity in the myocardium, lungs, stomach, and kidneys. These findings were typical for calciphylaxis (calcific uremic arteriolopathy), a form of metastatic calcification encountered in patients with chronic renal failure that is characterized by subcutaneous soft tissue calcification, painful ulcerations, high morbidity, and mortality. Treatment with sodium thiosulfate resulted in dramatic scintigraphic improvement.

Cynthia M Magro,  Richard Simman,  Sarah Jackson (2010)
Human calciphylaxis reflects a form of severe tissue compromise attributable to a unique microangiopathy that combines features of vascular thrombotic occlusion with endoluminal calcification. While most frequently described in patients with renal failure, it is seen in other settings, such as multiple myeloma; polyneuropathy, organomegaly, endocrinopathy, M protein, and skin changes (POEMS) syndrome; cirrhosis; and rheumatoid arthritis. Although most commonly involving the skin, calciphylaxis can affect other organs including the heart and gastrointestinal tract, in which cases it falls under the appellation of systemic calciphylaxis. There are cases in which the main pathology is one of endovascular thrombosis of the vessels of the fat without discernible calcification or one manifesting a pseudoangiosarcomatous pattern, hence adding to the histomorphologic spectrum of calciphylaxis. A variety of factors contribute to this severe occlusive microangiopathy, including an underlying procoagulant state and ectopic neo-osteogenesis of the microvasculature through varied mechanisms, including increased osteopontin production by vascular smooth muscle or reduced synthesis of fetuin and GLA matrix protein, important inhibitors of ectopic neo-osteogenesis. Certain factors adversely affect outcome, including truncal and genital involvement and systemic forms of calciphylaxis. With a better understanding of its pathophysiology, more-effective therapies, such as sodium thiosulfate and biphosphanates to reduce reactive oxygen species and receptor activator of nuclear factor κβ-mediated nuclear factor κβ activity, respectively, are being developed.