Dual versus triple therapy in patients hospitalized for COPD in France: a claims data study 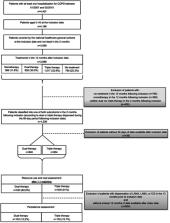 Following a hospitalization for COPD, dual and triple therapies were compared in terms of persistence and relations with outcomes (exacerbations, health care resource use and costs).

This was a historical observational database study. All patients aged ≥45 hospitalized for COPD between 2007 and 2015 were identified in a 1/97 th random sample of French claims data. Patients receiving dual therapy within 60 days after hospitalization were compared to patients receiving triple therapy, after propensity score matching on disease severity.

Following hospitalizations for COPD, patients on dual and triple therapy experienced recurrent exacerbations, limited adherence to therapies and high cost of care. Patients on triple therapy appeared more severe than those on dual therapy, as reflected by exacerbations and health care resource use.

Pierre-Olivier Girodet,  Nicholas Moore,  Anais Chartier … (2017)
Acute exacerbations of chronic obstructive pulmonary disease (COPD) can be prevented by inhaled treatment. Errors in inhaler handling, not taken into account in clinical trials, could impact drug delivery and minimise treatment benefit. We aimed to assess real-life inhaler device handling in COPD patients and its association with COPD exacerbations.To this end, 212 general practitioners and 50 pulmonologists assessed the handling of 3393 devices used for continuous treatment of COPD in 2935 patients. Handling errors were observed in over 50% of handlings, regardless of the device used. Critical errors compromising drug delivery were respectively made in 15.4%, 21.2%, 29.3%, 43.8%, 46.9% and 32.1% of inhalation assessment tests with Breezhaler® (n=876), Diskus® (n=452), Handihaler® (n=598), pressurised metered-dose inhaler (pMDI) (n=422), Respimat® (n=625) and Turbuhaler® (n=420).The proportion of patients requiring hospitalisation or emergency room visits in the past 3 months for severe COPD exacerbation was 3.3% (95% CI 2.0-4.5) in the absence of error and 6.9% (95% CI 5.3-8.5) in the presence of critical error (OR 1.86, 95% CI 1.14-3.04, p<0.05).Handling errors of inhaler devices are underestimated in real life and are associated with an increased rate of severe COPD exacerbation. Training in inhaler use is an integral part of COPD management.

Margaret Pasquale,  Shawn Sun,  Frank Song … (2012)
Background Exacerbations of chronic obstructive pulmonary disease (COPD) lead to significant increases in resource utilization and cost to the health care system. COPD patients with chronic bronchitis and a history of exacerbations pose an additional burden to the system. This study examined health care utilization and cost among these patients. Methods For this retrospective analysis, data were extracted from a large national health plan with a predominantly Medicare population. This study involved patients who were aged 40–89 years, had been enrolled continuously for 24 months or more, had at least two separate insurance claims for COPD with chronic bronchitis (International Classification of Diseases, Ninth Revision, Clinical Modification code 491.xx), and had pharmacy claims for COPD maintenance medications between January 1, 2007, and March 31, 2009. Two years of data were examined for each patient; the index date was defined as the first occurrence of COPD. Baseline characteristics were obtained from the first year of data, with health outcomes tracked in the second year. Severe exacerbation was defined by COPD-related hospitalization or death; moderate exacerbation was defined by oral or parenteral corticosteroid use. Adjusted numbers of exacerbations and COPD-related costs per patient were estimated controlling for demographic and clinical characteristics. Results The final study sample involved 8554 patients; mean age was 70.1 ± 8.6 years and 49.8% of the overall population had exacerbation, 13.9% had a severe exacerbation only, 29.1% had a moderate exacerbation only, and 6.8% had both a severe and moderate exacerbation. COPD-related mean annual costs were $4069 (all figures given in US dollars) for the overall population and $6381 for patients with two or more exacerbations. All-cause health care costs were $18,976 for the overall population and $23,901 for patients with history of two or more exacerbations. Severity of exacerbations, presence of cardiovascular disease, diabetes, and long-term oxygen use were associated with higher adjusted costs. Conclusions The results indicate that despite treatment with maintenance medications, COPD patients continue to have exacerbations resulting in higher costs. New medications and disease management interventions are warranted to reduce the severity and frequency of exacerbations and the related cost impact of the disease.