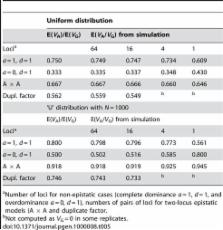 The relative proportion of additive and non-additive variation for complex traits is important in evolutionary biology, medicine, and agriculture. We address a long-standing controversy and paradox about the contribution of non-additive genetic variation, namely that knowledge about biological pathways and gene networks imply that epistasis is important. Yet empirical data across a range of traits and species imply that most genetic variance is additive. We evaluate the evidence from empirical studies of genetic variance components and find that additive variance typically accounts for over half, and often close to 100%, of the total genetic variance. We present new theoretical results, based upon the distribution of allele frequencies under neutral and other population genetic models, that show why this is the case even if there are non-additive effects at the level of gene action. We conclude that interactions at the level of genes are not likely to generate much interaction at the level of variance.

Genetic variation in quantitative or complex traits can be partitioned into many components due to additive, dominance, and interaction effects of genes. The most important is the additive genetic variance because it determines most of the correlation of relatives and the opportunities for genetic change by natural or artificial selection. From reviews of the literature and presentation of a summary analysis of human twin data, we show that a high proportion, typically over half, of the total genetic variance is additive. This is surprising as there are many potential interactions of gene effects within and between loci, some revealed in recent QTL analyses. We demonstrate that under the standard model of neutral mutation, which leads to a U-shaped distribution of gene frequencies with most near 0 or 1, a high proportion of additive variance would be expected regardless of the amount of dominance or epistasis at the individual loci. We also show that the model is compatible with observations in populations undergoing selection and results of QTL analyses on F2 populations.

Michael Posner,  Guillaume Charpentier,  Alexey Pshezhetsky … (2007)
Type 2 diabetes mellitus results from the interaction of environmental factors with a combination of genetic variants, most of which were hitherto unknown. A systematic search for these variants was recently made possible by the development of high-density arrays that permit the genotyping of hundreds of thousands of polymorphisms. We tested 392,935 single-nucleotide polymorphisms in a French case-control cohort. Markers with the most significant difference in genotype frequencies between cases of type 2 diabetes and controls were fast-tracked for testing in a second cohort. This identified four loci containing variants that confer type 2 diabetes risk, in addition to confirming the known association with the TCF7L2 gene. These loci include a non-synonymous polymorphism in the zinc transporter SLC30A8, which is expressed exclusively in insulin-producing beta-cells, and two linkage disequilibrium blocks that contain genes potentially involved in beta-cell development or function (IDE-KIF11-HHEX and EXT2-ALX4). These associations explain a substantial portion of disease risk and constitute proof of principle for the genome-wide approach to the elucidation of complex genetic traits.

Natural selection and the heritability of fitness components.

Timothy A. Mousseau,  Derek A Roff (1987)
The hypothesis that traits closely associated with fitness will generally possess lower heritabilities than traits more loosely connected with fitness is tested using 1120 narrow sense heritability estimates for wild, outbred animal populations, collected from the published record. Our results indicate that life history traits generally possess lower heritabilities than morphological traits, and that the means, medians, and cumulative frequency distributions of behavioural and physiological traits are intermediate between life history and morphological traits. These findings are consistent with popular interpretations of Fisher's (1930, 1958) Fundamental Theorem of Natural Selection, and Falconer (1960, 1981), but also indicate that high heritabilities are maintained within natural populations even for traits believed to be under strong selection. It is also found that the heritability of morphological traits is significantly lower for ectotherms than it is for endotherms which may in part be a result of the strong correlation between life history and body size for many ectotherms.

An integrative genomics approach to infer causal associations between gene expression and disease.

Xia Yang,  Carl T. Drake,  Aldons J Lusis … (2005)
A key goal of biomedical research is to elucidate the complex network of gene interactions underlying complex traits such as common human diseases. Here we detail a multistep procedure for identifying potential key drivers of complex traits that integrates DNA-variation and gene-expression data with other complex trait data in segregating mouse populations. Ordering gene expression traits relative to one another and relative to other complex traits is achieved by systematically testing whether variations in DNA that lead to variations in relative transcript abundances statistically support an independent, causative or reactive function relative to the complex traits under consideration. We show that this approach can predict transcriptional responses to single gene-perturbation experiments using gene-expression data in the context of a segregating mouse population. We also demonstrate the utility of this approach by identifying and experimentally validating the involvement of three new genes in susceptibility to obesity.

Publisher ID: 07-PLGE-RA-0877R2
DOI: 10.1371/journal.pgen.1000008
PMC ID: 2265475
PubMed ID: 18454194
Copyright statement: Hill et al. This is an open-access article distributed under the terms of the Creative Commons Attribution License, which permits unrestricted use, distribution, and reproduction in any medium, provided the original author and source are credited.