The compelling link between physical activity and the body's defense system 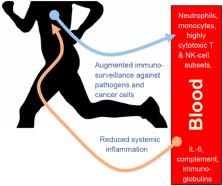 This review summarizes research discoveries within 4 areas of exercise immunology that have received the most attention from investigators: (1) acute and chronic effects of exercise on the immune system, (2) clinical benefits of the exercise–immune relationship, (3) nutritional influences on the immune response to exercise, and (4) the effect of exercise on immunosenescence. These scientific discoveries can be organized into distinctive time periods: 1900–1979, which focused on exercise-induced changes in basic immune cell counts and function; 1980–1989, during which seminal papers were published with evidence that heavy exertion was associated with transient immune dysfunction, elevated inflammatory biomarkers, and increased risk of upper respiratory tract infections; 1990–2009, when additional focus areas were added to the field of exercise immunology including the interactive effect of nutrition, effects on the aging immune system, and inflammatory cytokines; and 2010 to the present, when technological advances in mass spectrometry allowed system biology approaches (i.e., metabolomics, proteomics, lipidomics, and microbiome characterization) to be applied to exercise immunology studies. The future of exercise immunology will take advantage of these technologies to provide new insights on the interactions between exercise, nutrition, and immune function, with application down to the personalized level. Additionally, these methodologies will improve mechanistic understanding of how exercise-induced immune perturbations reduce the risk of common chronic diseases.

Romain Meeusen, Martine Duclos, Carl Foster … (2013)
Successful training not only must involve overload but also must avoid the combination of excessive overload plus inadequate recovery. Athletes can experience short-term performance decrement without severe psychological or lasting other negative symptoms. This functional overreaching will eventually lead to an improvement in performance after recovery. When athletes do not sufficiently respect the balance between training and recovery, nonfunctional overreaching (NFOR) can occur. The distinction between NFOR and overtraining syndrome (OTS) is very difficult and will depend on the clinical outcome and exclusion diagnosis. The athlete will often show the same clinical, hormonal, and other signs and symptoms. A keyword in the recognition of OTS might be "prolonged maladaptation" not only of the athlete but also of several biological, neurochemical, and hormonal regulation mechanisms. It is generally thought that symptoms of OTS, such as fatigue, performance decline, and mood disturbances, are more severe than those of NFOR. However, there is no scientific evidence to either confirm or refute this suggestion. One approach to understanding the etiology of OTS involves the exclusion of organic diseases or infections and factors such as dietary caloric restriction (negative energy balance) and insufficient carbohydrate and/or protein intake, iron deficiency, magnesium deficiency, allergies, and others together with identification of initiating events or triggers. In this article, we provide the recent status of possible markers for the detection of OTS. Currently, several markers (hormones, performance tests, psychological tests, and biochemical and immune markers) are used, but none of them meet all the criteria to make their use generally accepted.

Exercise and the immune system: regulation, integration, and adaptation.

Bente Pedersen, Laurie Hoffman-Goetz (2000)
Stress-induced immunological reactions to exercise have stimulated much research into stress immunology and neuroimmunology. It is suggested that exercise can be employed as a model of temporary immunosuppression that occurs after severe physical stress. The exercise-stress model can be easily manipulated experimentally and allows for the study of interactions between the nervous, the endocrine, and the immune systems. This review focuses on mechanisms underlying exercise-induced immune changes such as neuroendocrinological factors including catecholamines, growth hormone, cortisol, beta-endorphin, and sex steroids. The contribution of a metabolic link between skeletal muscles and the lymphoid system is also reviewed. The mechanisms of exercise-associated muscle damage and the initiation of the inflammatory cytokine cascade are discussed. Given that exercise modulates the immune system in healthy individuals, considerations of the clinical ramifications of exercise in the prevention of diseases for which the immune system has a role is of importance. Accordingly, drawing on the experimental, clinical, and epidemiological literature, we address the interactions between exercise and infectious diseases as well as exercise and neoplasia within the context of both aging and nutrition.