Mortality of young offenders: a national register-based follow-up study of 15- to 19-year-old Finnish delinquents referred for forensic psychiatric examination between 1980 and 2010 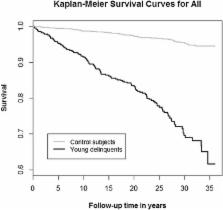 The mortality rate of young offenders is high. Furthermore, mortality in young offenders is associated with psychiatric and substance use disorders. The primary aim of this national register-based follow-up study was to investigate the mortality rate of Finnish delinquents who underwent a forensic psychiatric examination between 1980 and 2010. As delinquency is not a solid entity, we further aimed to compare the risk of premature death among different subgroups of the delinquents; violent versus non-violent offenders, offenders with alcohol use disorders versus those with no such diagnoses, offenders with schizophrenia spectrum disorders versus conduct- and personality-disordered offenders, under-aged versus young adult offenders, and, finally, boys versus girls.

We collected the forensic psychiatric examination reports of all 15- to 19-year-old offenders who were born in Finland and had undergone the examination between 1.1.1980 and 31.12.2010 (n = 606) from the archives of the National Institute of Health and Welfare and retrospectively reviewed them. For each delinquent, four age-, gender- and place of birth-matched controls were randomly selected from the Central Population Register (n = 2424). The delinquents and their controls were followed until the end of 2015. The median follow-up time was 23.9 years (interquartile range 15.3–29.5). We obtained the mortality data from the causes of death register. Deaths attributable to a disease or an occupational disease were considered natural, and those attributable to an accident, suicide or homicide were considered unnatural.

Even though the Finnish correction system prefers psychiatric treatment and rehabilitation over criminal sanctions, and the national health care system offers developmental-phase-specific psychiatric care, the mortality rate of delinquents, especially of those with a history of violent offences, is high. The excess mortality of offenders can be regarded as a specific public-health inequity that calls for more effective intervention procedures than those used thus far.

A systematic review of mortality in schizophrenia: is the differential mortality gap worsening over time?

David C Chant,  Sukanta Saha,  John McGrath (2007)
Despite improvements in mental health services in recent decades, it is unclear whether the risk of mortality in schizophrenia has changed over time. To explore the distribution of standardized mortality ratios (SMRs) for people with schizophrenia. Broad search terms were used in MEDLINE, PsychINFO, Web of Science, and Google Scholar to identify all studies that investigated mortality in schizophrenia, published between January 1, 1980, and January 31, 2006. References were also identified from review articles, reference lists, and communication with authors. Population-based studies that reported primary data on deaths in people with schizophrenia. Operationalized criteria were used to extract key study features and mortality data. We examined the distribution of SMRs and pooled selected estimates using random-effects meta-analysis. We identified 37 articles drawn from 25 different nations. The median SMR for all persons for all-cause mortality was 2.58 (10%-90% quantile, 1.18-5.76), with a corresponding random-effects pooled SMR of 2.50 (95% confidence interval, 2.18-2.43). No sex difference was detected. Suicide was associated with the highest SMR (12.86); however, most of the major causes-of-death categories were found to be elevated in people with schizophrenia. The SMRs for all-cause mortality have increased during recent decades (P = .03). With respect to mortality, a substantial gap exists between the health of people with schizophrenia and the general community. This differential mortality gap has worsened in recent decades. In light of the potential for second-generation antipsychotic medications to further adversely influence mortality rates in the decades to come, optimizing the general health of people with schizophrenia warrants urgent attention.

Risks of all-cause and suicide mortality in mental disorders: a meta-review.

Guy M. Goodwin,  Edward Chesney,  Seena Fazel (2014)
A meta-review, or review of systematic reviews, was conducted to explore the risks of all-cause and suicide mortality in major mental disorders. A systematic search generated 407 relevant reviews, of which 20 reported mortality risks in 20 different mental disorders and included over 1.7 million patients and over a quarter of a million deaths. All disorders had an increased risk of all-cause mortality compared with the general population, and many had mortality risks larger than or comparable to heavy smoking. Those with the highest all-cause mortality ratios were substance use disorders and anorexia nervosa. These higher mortality risks translate into substantial (10-20 years) reductions in life expectancy. Borderline personality disorder, anorexia nervosa, depression and bipolar disorder had the highest suicide risks. Notable gaps were identified in the review literature, and the quality of the included reviews was typically low. The excess risks of mortality and suicide in all mental disorders justify a higher priority for the research, prevention, and treatment of the determinants of premature death in psychiatric patients. Copyright © 2014 World Psychiatric Association.