Novel targeting of PEGylated liposomes for codelivery of TGF-β1 siRNA and four antitubercular drugs to human macrophages for the treatment of mycobacterial infection: a quantitative proteomic study 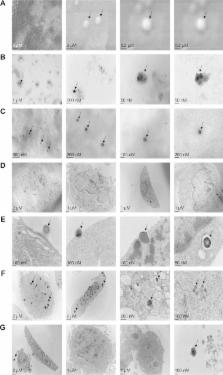 Tuberculosis (TB) is still a major public health issue in developing countries, and its chemotherapy is compromised by poor drug compliance and severe side effects. This study aimed to synthesize and characterize new multimodal PEGylated liposomes encapsulated with clinically commonly used anti-TB drugs with linkage to small interfering RNA (siRNA) against transforming growth factor-β1 (TGF-β1). The novel NP-siRNA liposomes could target THP-1-derived human macrophages that were the host cells of mycobacterium infection. The biological effects of the NP-siRNA liposomes were evaluated on cell cycle distribution, apoptosis, autophagy, and the gene silencing efficiency of TGF-β1 siRNA in human macrophages. We also explored the proteomic responses to the newly synthesized NP-siRNA liposomes using the stable isotope labeling with amino acids in cell culture approach. The results showed that the multifunctional PEGylated liposomes were successfully synthesized and chemically characterized with a mean size of 265.1 nm. The novel NP-siRNA liposomes functionalized with the anti-TB drugs and TGF-β1 siRNA were endocytosed efficiently by human macrophages as visualized by transmission electron microscopy and scanning electron microscopy. Furthermore, the liposomes showed a low cytotoxicity toward human macrophages. There was no significant effect on cell cycle distribution and apoptosis in THP-1-derived macrophages after drug exposure at concentrations ranging from 2.5 to 62.5 μg/mL. Notably, there was a 6.4-fold increase in the autophagy of human macrophages when treated with the NP-siRNA liposomes at 62.5 μg/mL. In addition, the TGF-β1 and nuclear factor-κB expression levels were downregulated by the NP-siRNA liposomes in THP-1-derived macrophages. The Ingenuity Pathway Analysis data showed that there were over 40 signaling pathways involved in the proteomic responses to NP-siRNA liposome exposure in human macrophages, with 160 proteins mapped. The top five canonical signaling pathways were eukaryotic initiation factor 2 signaling, actin cytoskeleton signaling, remodeling of epithelial adherens junctions, epithelial adherens junction signaling, and Rho GDP-dissociation inhibitor signaling pathways. Collectively, the novel synthetic targeting liposomes represent a promising delivery system for anti-TB drugs to human macrophages with good selectivity and minimal cytotoxicity.

Shao-En Ong,  Matthias Mann (2005)
Stable isotope labeling by amino acids in cell culture (SILAC) is a simple, robust, yet powerful approach in mass spectrometry (MS)-based quantitative proteomics. SILAC labels cellular proteomes through normal metabolic processes, incorporating non-radioactive, stable isotope-containing amino acids in newly synthesized proteins. Growth medium is prepared where natural ("light") amino acids are replaced by "heavy" SILAC amino acids. Cells grown in this medium incorporate the heavy amino acids after five cell doublings and SILAC amino acids have no effect on cell morphology or growth rates. When light and heavy cell populations are mixed, they remain distinguishable by MS, and protein abundances are determined from the relative MS signal intensities. SILAC provides accurate relative quantification without any chemical derivatization or manipulation and enables development of elegant functional assays in proteomics. In this protocol, we describe how to apply SILAC and the use of nano-scale liquid chromatography coupled to electrospray ionization mass spectrometry for protein identification and quantification. This procedure can be completed in 8 days.

Matthias Mann (2006)
Researchers in many biological areas now routinely characterize proteins by mass spectrometry. Among the many formats for quantitative proteomics, stable-isotope labelling by amino acids in cell culture (SILAC) has emerged as a simple and powerful one. SILAC removes false positives in protein-interaction studies, reveals large-scale kinetics of proteomes and - as a quantitative phosphoproteomics technology - directly uncovers important points in the signalling pathways that control cellular decisions.

Zhuo Wang,  Yanlin Zhao,  Shiming Cheng … (2014)
China scaled up a tuberculosis control programme (based on the directly observed treatment, short-course [DOTS] strategy) to cover half the population during the 1990s, and to the entire population after 2000. We assessed the effect of the programme. In this longitudinal analysis, we compared data from three national tuberculosis prevalence surveys done in 1990, 2000, and 2010. The 2010 survey screened 252,940 eligible individuals aged 15 years and older at 176 investigation points, chosen by stratified random sampling from all 31 mainland provinces. All individuals had chest radiographs taken. Those with abnormal radiographs, persistent cough, or both, were classified as having suspected tuberculosis. Tuberculosis was diagnosed by chest radiograph, sputum-smear microscopy, and culture. Trained staff interviewed each patient with tuberculosis. The 1990 and 2000 surveys were reanalysed and compared with the 2010 survey. From 1990 to 2010, the prevalence of smear-positive tuberculosis decreased from 170 cases (95% CI 166-174) to 59 cases (49-72) per 100,000 population. During the 1990s, smear-positive prevalence fell only in the provinces with the DOTS programme; after 2000, prevalence decreased in all provinces. The percentage reduction in smear-positive prevalence was greater for the decade after 2000 than the decade before (57% vs 19%; p<0.0001). 70% of the total reduction in smear-positive prevalence (78 of 111 cases per 100,000 population) occurred after 2000. Of these cases, 68 (87%) were in known cases-ie, cases diagnosed with tuberculosis before the survey. Of the known cases, the proportion treated by the public health system (using the DOTS strategy) increased from 59 (15%) of 370 cases in 2000 to 79 (66%) of 123 cases in 2010, contributing to reduced proportions of treatment default (from 163 [43%] of 370 cases to 35 [22%] of 123 cases) and retreatment cases (from 312 [84%] of 374 cases to 48 [31%] of 137 cases; both p<0.0001). In 20 years, China more than halved its tuberculosis prevalence. Marked improvement in tuberculosis treatment, driven by a major shift in treatment from hospitals to the public health centres (that implemented the DOTS strategy) was largely responsible for this epidemiological effect. Chinese Ministry of Health. Copyright © 2014 Elsevier Ltd. All rights reserved.