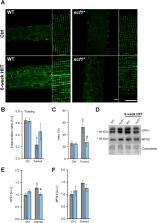 HIIT was investigated after an acute bout of exercise and after a chronic intervention (3x/week for 6 weeks) in wild-type (WT) vs. NOX2 activity-deficient ( ncf1*) mice. NOX2 activation during HIIT was measured using an electroporated genetically-encoded biosensor. Immunoblotting and single-fiber microscopy was performed to measure classical exercise-training responsive endpoints in skeletal muscle.

A single bout of HIIT increased NOX2 activity measured as p47-roGFP oxidation immediately after exercise but not 1 h or 4 h after exercise. After a 6-week HIIT regimen, improvements in maximal running capacity and some muscle training-markers responded less to HIIT in the ncf1* mice compared to WT, including superoxide dismutase 2, catalase, hexokinase II, pyruvate dehydrogenase and protein markers of mitochondrial oxidative phosphorylation complexes. Strikingly, HIIT-training increased mitochondrial network area and decreased fragmentation in WT mice only.

Valerie C Kahn,  Michael Ristow,  Kim Zarse … (2009)
Exercise promotes longevity and ameliorates type 2 diabetes mellitus and insulin resistance. However, exercise also increases mitochondrial formation of presumably harmful reactive oxygen species (ROS). Antioxidants are widely used as supplements but whether they affect the health-promoting effects of exercise is unknown. We evaluated the effects of a combination of vitamin C (1000 mg/day) and vitamin E (400 IU/day) on insulin sensitivity as measured by glucose infusion rates (GIR) during a hyperinsulinemic, euglycemic clamp in previously untrained (n = 19) and pretrained (n = 20) healthy young men. Before and after a 4 week intervention of physical exercise, GIR was determined, and muscle biopsies for gene expression analyses as well as plasma samples were obtained to compare changes over baseline and potential influences of vitamins on exercise effects. Exercise increased parameters of insulin sensitivity (GIR and plasma adiponectin) only in the absence of antioxidants in both previously untrained (P < 0.001) and pretrained (P < 0.001) individuals. This was paralleled by increased expression of ROS-sensitive transcriptional regulators of insulin sensitivity and ROS defense capacity, peroxisome-proliferator-activated receptor gamma (PPARgamma), and PPARgamma coactivators PGC1alpha and PGC1beta only in the absence of antioxidants (P < 0.001 for all). Molecular mediators of endogenous ROS defense (superoxide dismutases 1 and 2; glutathione peroxidase) were also induced by exercise, and this effect too was blocked by antioxidant supplementation. Consistent with the concept of mitohormesis, exercise-induced oxidative stress ameliorates insulin resistance and causes an adaptive response promoting endogenous antioxidant defense capacity. Supplementation with antioxidants may preclude these health-promoting effects of exercise in humans.

Blake Perry,  George Heigenhauser,  Lawrence L. Spriet … (2010)
Exercise training induces mitochondrial biogenesis, but the time course of molecular sequelae that accompany repetitive training stimuli remains to be determined in human skeletal muscle. Therefore, throughout a seven-session, high-intensity interval training period that increased (12%), we examined the time course of responses of (a) mitochondrial biogenesis and fusion and fission proteins, and (b) selected transcriptional and mitochondrial mRNAs and proteins in human muscle. Muscle biopsies were obtained 4 and 24 h after the 1st, 3rd, 5th and 7th training session. PGC-1α mRNA was increased >10-fold 4 h after the 1st session and returned to control within 24 h. This 'saw-tooth' pattern continued until the 7th bout, with smaller increases after each bout. In contrast, PGC-1α protein was increased 24 h after the 1st bout (23%) and plateaued at +30-40% between the 3rd and 7th bout. Increases in PGC-1β mRNA and protein were more delayed and smaller, and did not persist. Distinct patterns of increases were observed in peroxisome proliferator-activated receptor (PPAR) α and γ protein (1 session), PPAR β/δ mRNA and protein (5 sessions) and nuclear respiratory factor-2 protein (3 sessions) while no changes occurred in mitochondrial transcription factor A protein. Citrate synthase (CS) and β-HAD mRNA were rapidly increased (1 session), followed 2 sessions later (session 3) by increases in CS and β-HAD activities, and mitochondrial DNA. Changes in COX-IV mRNA (session 3) and protein (session 5) were more delayed. Training also increased mitochondrial fission proteins (fission protein-1, >2-fold; dynamin-related protein-1, 47%) and the fusion protein mitofusin-1 (35%) but not mitofusin-2. This study has provided the following novel information: (a) the training-induced increases in transcriptional and mitochondrial proteins appear to result from the cumulative effects of transient bursts in their mRNAs, (b) training-induced mitochondrial biogenesis appears to involve re-modelling in addition to increased mitochondrial content, and (c) the 'transcriptional capacity' of human muscle is extremely sensitive, being activated by one training bout.

Warburg, me and Hexokinase 2: Multiple discoveries of key molecular events underlying one of cancers' most common phenotypes, the "Warburg Effect", i.e., elevated glycolysis in the presence of oxygen.

Nancy Pedersen (2007)
As a new faculty member at The Johns Hopkins University, School of Medicine, the author began research on cancer in 1969 because this frequently fatal disease touched many whom he knew. He was intrigued with its viscous nature, the failure of all who studied it to find a cure, and also fascinated by the pioneering work of Otto Warburg, a biochemical legend and Nobel laureate. Warburg who died 1 year later in 1970 had shown in the 1920s that the most striking biochemical phenotype of cancers is their aberrant energy metabolism. Unlike normal tissues that derive most of their energy (ATP) by metabolizing the sugar glucose to carbon dioxide and water, a process that involves oxygen-dependent organelles called "mitochondria", Warburg showed that cancers frequently rely less on mitochondria and obtain as much as 50% of their ATP by metabolizing glucose directly to lactic acid, even in the presence of oxygen. This frequent phenotype of cancers became known as the "Warburg effect", and the author of this review strongly believed its understanding would facilitate the discovery of a cure. Following in the final footsteps of Warburg and caught in the midst of an unpleasant anti-Warburg, anti-metabolic era, the author and his students/collaborators began quietly to identify the key molecular events involved in the "Warburg effect". Here, the author describes via a series of sequential discoveries touching five decades how despite some impairment in the respiratory capacity of malignant tumors, that hexokinase 2 (HK-2), its mitochondrial receptor (VDAC), and the gene that encodes HK-2 (HK-2 gene) play the most pivotal and direct roles in the "Warburg effect". They discovered also that like a "Trojan horse" the simple lactic acid analog 3-bromopyruvate selectively enters the cells of cancerous animal tumors that exhibit the "Warburg effect" and quickly dissipates their energy (ATP) production factories (i.e., glycolysis and mitochondria) resulting in tumor destruction without harm to the animals.