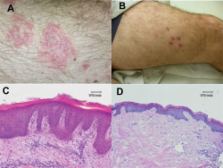 Psoriasis is a common, chronic, inflammatory skin disease that can have a significant impact on the quality of life of those who are afflicted. Recent advances in the understanding of the pathophysiology of psoriasis have led to the development of new, genetically engineered, targeted therapies for this disease. Among the most successful strategies for treatment has been the use of biologic immunotherapies targeting tumor necrosis factor alpha (TNF). Recent research has evaluated the efficacy and safety of a new anti-TNF agent, adalimumab. Adalimumab is a human monoclonal antibody that is approved by the US Food and Drug Administration (FDA) and the European Medicines Agency (EMEA) for the treatment of rheumatoid arthritis and psoriatic arthritis. Recently released data from large, randomized clinical trials suggests that adalimumab has significant efficacy for the treatment of chronic plaque psoriasis and is well tolerated. Thus, adalimumab seems to be a promising therapeutic approach for patients who suffer from moderate to severe plaque psoriasis.

The PREMIER study: A multicenter, randomized, double-blind clinical trial of combination therapy with adalimumab plus methotrexate versus methotrexate alone or adalimumab alone in patients with early, aggressive rheumatoid arthritis who had not had previous methotrexate treatment.

F Breedveld,  John F Kavanaugh,  Justus B. Cohen … (2005)
To compare the efficacy and safety of adalimumab plus methotrexate (MTX) versus MTX monotherapy or adalimumab monotherapy in patients with early, aggressive rheumatoid arthritis (RA) who had not previously received MTX treatment. This was a 2-year, multicenter, double-blind, active comparator-controlled study of 799 RA patients with active disease of < 3 years' duration who had never been treated with MTX. Treatments included adalimumab 40 mg subcutaneously every other week plus oral MTX, adalimumab 40 mg subcutaneously every other week, or weekly oral MTX. Co-primary end points at year 1 were American College of Rheumatology 50% improvement (ACR50) and mean change from baseline in the modified total Sharp score. Combination therapy was superior to both MTX and adalimumab monotherapy in all outcomes measured. At year 1, more patients receiving combination therapy exhibited an ACR50 response (62%) than did patients who received MTX or adalimumab monotherapy (46% and 41%, respectively; both P < 0.001). Similar superiority of combination therapy was seen in ACR20, ACR70, and ACR90 response rates at 1 and 2 years. There was significantly less radiographic progression (P < or = 0.002) among patients in the combination treatment arm at both year 1 and year 2 (1.3 and 1.9 Sharp units, respectively) than in patients in the MTX arm (5.7 and 10.4 Sharp units) or the adalimumab arm (3.0 and 5.5 Sharp units). After 2 years of treatment, 49% of patients receiving combination therapy exhibited disease remission (28-joint Disease Activity Score <2.6), and 49% exhibited a major clinical response (ACR70 response for at least 6 continuous months), rates approximately twice those found among patients receiving either monotherapy. The adverse event profiles were comparable in all 3 groups. In this population of patients with early, aggressive RA, combination therapy with adalimumab plus MTX was significantly superior to either MTX alone or adalimumab alone in improving signs and symptoms of disease, inhibiting radiographic progression, and effecting clinical remission.

Safety analyses of adalimumab (HUMIRA) in global clinical trials and US postmarketing surveillance of patients with rheumatoid arthritis.

M H Schiff,  G.-R. Burmester,  J D Kent … (2006)
To assess the safety of adalimumab in global clinical trials and postmarketing surveillance among patients with rheumatoid arthritis (RA). Safety data for adalimumab treated patients from randomised controlled trials, open label extensions, and two phase IIIb open label trials were analysed. In addition, postmarketing spontaneous reports of adverse events in the United States were collected following Food and Drug Administration approval of adalimumab on 31 December 2002. As of 15 April 2005, the RA clinical trial safety database analysed covered 10,050 patients, representing 12,506 patient-years (PYs) of adalimumab exposure. The rate of serious infections, 5.1/100 PYs, was comparable to that reported on 31 August 2002 (4.9/100 PYs), and to published reports of RA populations naive to anti-tumour necrosis factor (TNF) therapy. Following implementation of tuberculosis (TB) screening in clinical trials, the rate of TB decreased. There were 34 cases of TB as of this analysis (0.27/100 PYs). The standardised incidence ratio for lymphoma was 3.19 (95% CI 1.78 to 5.26), consistent with the observed increased incidence in the general RA population. As of 30 June 2005, there were an estimated 78 522 PYs of exposure to adalimumab in the US postmarketing period. Seventeen TB cases were spontaneously reported (0.02/100 PYs) from the US. Rates of other postmarketing events of interest, such as congestive heart failure, systemic lupus erythematosus, opportunistic infections, blood dyscrasias, lymphomas, and demyelinating disease, support observations from clinical trials. Analyses of these data demonstrate that long term adalimumab treatment is generally safe and well tolerated in patients with RA.

Johannes Reitsma,  Hendrik Vos,  Brent C Opmeer … (2003)
Methotrexate and cyclosporine are well-known systemic therapies for moderate-to-severe chronic plaque psoriasis. We conducted a randomized, controlled trial comparing methotrexate and cyclosporine in terms of effectiveness, side effects, and the quality of life. A total of 88 patients with moderate-to-severe psoriasis were randomly assigned to treatment for 16 weeks with either methotrexate (44 patients; initial dose, 15 mg per week) or cyclosporine (44 patients; initial dose, 3 mg per kilogram of body weight per day) and were followed for another 36 weeks. The primary outcome was the difference between groups in the psoriasis area-and-severity index after 16 weeks of treatment, after adjustment for base-line values; scores were determined in a blinded fashion by trained observers. Two patients were excluded from the analysis after randomization because they were found to be ineligible, and one patient withdrew his consent. Twelve patients in the methotrexate group had to discontinue treatment because of reversible elevations in liver-enzyme levels, and 1 patient in the cyclosporine group had to do so because of an elevation in the bilirubin level, but all 13 were included in the analysis. After 16 weeks of treatment, the mean (+/-SE) score for the psoriasis area-and-severity index decreased from 13.4+/-3.6 at base line to 5.0+/-0.7 among 43 patients treated with methotrexate, whereas the score decreased from 14.0+/-6.6 to 3.8+/-0.5 among 42 patients treated with cyclosporine. After adjustment for base-line values, the mean absolute difference in values at 16 weeks was 1.3 (95 percent confidence interval, -0.2 to 2.8; P=0.09). The physician's global assessment of the extent of psoriasis, the time to and the rates of remission, and the quality of life were similar in the two groups. No significant differences in efficacy were found between methotrexate and cyclosporine for the treatment of moderate-to-severe psoriasis. Copyright 2003 Massachusetts Medical Society