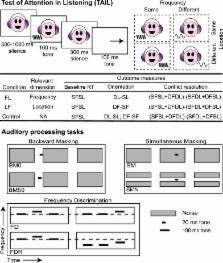 Attention modulates auditory perception, but there are currently no simple tests that specifically quantify this modulation. To fill the gap, we developed a new, easy-to-use test of attention in listening (TAIL) based on reaction time. On each trial, two clearly audible tones were presented sequentially, either at the same or different ears. The frequency of the tones was also either the same or different (by at least two critical bands). When the task required same/different frequency judgments, presentation at the same ear significantly speeded responses and reduced errors. A same/different ear (location) judgment was likewise facilitated by keeping tone frequency constant. Perception was thus influenced by involuntary orienting of attention along the task-irrelevant dimension. When information in the two stimulus dimensions were congruent (same-frequency same-ear, or different-frequency different-ear), response was faster and more accurate than when they were incongruent (same-frequency different-ear, or different-frequency same-ear), suggesting the involvement of executive control to resolve conflicts. In total, the TAIL yielded five independent outcome measures: (1) baseline reaction time, indicating information processing efficiency, (2) involuntary orienting of attention to frequency and (3) location, and (4) conflict resolution for frequency and (5) location. Processing efficiency and conflict resolution accounted for up to 45% of individual variances in the low- and high-threshold variants of three psychoacoustic tasks assessing temporal and spectral processing. Involuntary orientation of attention to the irrelevant dimension did not correlate with perceptual performance on these tasks. Given that TAIL measures are unlikely to be limited by perceptual sensitivity, we suggest that the correlations reflect modulation of perceptual performance by attention. The TAIL thus has the power to identify and separate contributions of different components of attention to auditory perception.

The attention system of the human brain.

A dual-networks architecture of top-down control.

This study was funded by the Medical Research Council (MRC), United Kingdom, through intramural funding to the MRC Institute of Hearing Research. All authors were MRC employees at the time the research was conducted. The funder had no role in study design, data collection and analysis, decision to publish, or preparation of the manuscript.