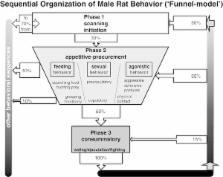 Journal: Fluids and Barriers of the CNS

Beta-endorphin (β-END) is an opioid neuropeptide which has an important role in the development of hypotheses concerning the non-synaptic or paracrine communication of brain messages. This kind of communication between neurons has been designated volume transmission (VT) to differentiate it clearly from synaptic communication. VT occurs over short as well as long distances via the extracellular space in the brain, as well as via the cerebrospinal fluid (CSF) flowing through the ventricular spaces inside the brain and the arachnoid space surrounding the central nervous system (CNS). To understand how β-END can have specific behavioral effects, we use the notion behavioral state, inspired by the concept of machine state, coming from Turing (Proc London Math Soc, Series 2,42:230-265, 1937). In section 1.4 the sequential organization of male rat behavior is explained showing that an animal is not free to switch into another state at any given moment. Funneling-constraints restrict the number of possible behavioral transitions in specific phases while at other moments in the sequence the transition to other behavioral states is almost completely open. The effects of β-END on behaviors like food intake and sexual behavior, and the mechanisms involved in reward, meditation and pain control are discussed in detail. The effects on the sequential organization of behavior and on state transitions dominate the description of these effects.

A Imperato,  Gennaro Di Prisco (1988)
The effect of various drugs on the extracellular concentration of dopamine in two terminal dopaminergic areas, the nucleus accumbens septi (a limbic area) and the dorsal caudate nucleus (a subcortical motor area), was studied in freely moving rats by using brain dialysis. Drugs abused by humans (e.g., opiates, ethanol, nicotine, amphetamine, and cocaine) increased extracellular dopamine concentrations in both areas, but especially in the accumbens, and elicited hypermotility at low doses. On the other hand, drugs with aversive properties (e.g., agonists of kappa opioid receptors, U-50,488, tifluadom, and bremazocine) reduced dopamine release in the accumbens and in the caudate and elicited hypomotility. Haloperidol, a neuroleptic drug, increased extracellular dopamine concentrations, but this effect was not preferential for the accumbens and was associated with hypomotility and sedation. Drugs not abused by humans [e.g., imipramine (an antidepressant), atropine (an antimuscarinic drug), and diphenhydramine (an antihistamine)] failed to modify synaptic dopamine concentrations. These results provide biochemical evidence for the hypothesis that stimulation of dopamine transmission in the limbic system might be a fundamental property of drugs that are abused.

Zhi-Qi Zhao (2008)
Acupuncture has been accepted to effectively treat chronic pain by inserting needles into the specific "acupuncture points" (acupoints) on the patient's body. During the last decades, our understanding of how the brain processes acupuncture analgesia has undergone considerable development. Acupuncture analgesia is manifested only when the intricate feeling (soreness, numbness, heaviness and distension) of acupuncture in patients occurs following acupuncture manipulation. Manual acupuncture (MA) is the insertion of an acupuncture needle into acupoint followed by the twisting of the needle up and down by hand. In MA, all types of afferent fibers (Abeta, Adelta and C) are activated. In electrical acupuncture (EA), a stimulating current via the inserted needle is delivered to acupoints. Electrical current intense enough to excite Abeta- and part of Adelta-fibers can induce an analgesic effect. Acupuncture signals ascend mainly through the spinal ventrolateral funiculus to the brain. Many brain nuclei composing a complicated network are involved in processing acupuncture analgesia, including the nucleus raphe magnus (NRM), periaqueductal grey (PAG), locus coeruleus, arcuate nucleus (Arc), preoptic area, nucleus submedius, habenular nucleus, accumbens nucleus, caudate nucleus, septal area, amygdale, etc. Acupuncture analgesia is essentially a manifestation of integrative processes at different levels in the CNS between afferent impulses from pain regions and impulses from acupoints. In the last decade, profound studies on neural mechanisms underlying acupuncture analgesia predominately focus on cellular and molecular substrate and functional brain imaging and have developed rapidly. Diverse signal molecules contribute to mediating acupuncture analgesia, such as opioid peptides (mu-, delta- and kappa-receptors), glutamate (NMDA and AMPA/KA receptors), 5-hydroxytryptamine, and cholecystokinin octapeptide. Among these, the opioid peptides and their receptors in Arc-PAG-NRM-spinal dorsal horn pathway play a pivotal role in mediating acupuncture analgesia. The release of opioid peptides evoked by electroacupuncture is frequency-dependent. EA at 2 and 100Hz produces release of enkephalin and dynorphin in the spinal cord, respectively. CCK-8 antagonizes acupuncture analgesia. The individual differences of acupuncture analgesia are associated with inherited genetic factors and the density of CCK receptors. The brain regions associated with acupuncture analgesia identified in animal experiments were confirmed and further explored in the human brain by means of functional imaging. EA analgesia is likely associated with its counter-regulation to spinal glial activation. PTX-sesntive Gi/o protein- and MAP kinase-mediated signal pathways as well as the downstream events NF-kappaB, c-fos and c-jun play important roles in EA analgesia.

Endocrinology of the stress response.

Evangelia Charmandari,  Constantine Tsigos,  George Panagiotis Chrousos (2005)
The stress response is subserved by the stress system, which is located both in the central nervous system and the periphery. The principal effectors of the stress system include corticotropin-releasing hormone (CRH); arginine vasopressin; the proopiomelanocortin-derived peptides alpha-melanocyte-stimulating hormone and beta-endorphin, the glucocorticoids; and the catecholamines norepinephrine and epinephrine. Appropriate responsiveness of the stress system to stressors is a crucial prerequisite for a sense of well-being, adequate performance of tasks, and positive social interactions. By contrast, inappropriate responsiveness of the stress system may impair growth and development and may account for a number of endocrine, metabolic, autoimmune, and psychiatric disorders. The development and severity of these conditions primarily depend on the genetic vulnerability of the individual, the exposure to adverse environmental factors, and the timing of the stressful events, given that prenatal life, infancy, childhood, and adolescence are critical periods characterized by increased vulnerability to stressors.