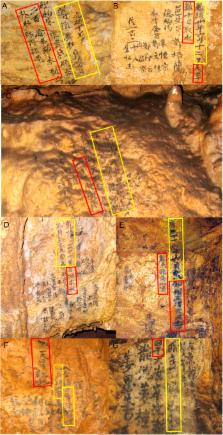 The collapse of some pre-historical and historical cultures, including Chinese dynasties were presumably linked to widespread droughts, on the basis of synchronicities of societal crises and proxy-based climate events. Here, we present a comparison of ancient inscriptions in Dayu Cave from Qinling Mountains, central China, which described accurate times and detailed impacts of seven drought events during the period of 1520–1920 CE, with high-resolution speleothem records from the same cave. The comparable results provide unique and robust tests on relationships among speleothem δ 18O changes, drought events, and societal unrest. With direct historical evidences, our results suggest that droughts and even modest events interrupting otherwise wet intervals can cause serious social crises. Modeling results of speleothem δ 18O series suggest that future precipitation in central China may be below the average of the past 500 years. As Qinling Mountain is the main recharge area of two large water transfer projects and habitats of many endangered species, it is imperative to explore an adaptive strategy for the decline in precipitation and/or drought events.

Millennial- and orbital-scale changes in the East Asian monsoon over the past 224,000 years.

S. Chen,  R Edwards,  Yongjin Wang … (2008)
High-resolution speleothem records from China have provided insights into the factors that control the strength of the East Asian monsoon. Our understanding of these factors remains incomplete, however, owing to gaps in the record of monsoon history over the past two interglacial-glacial cycles. In particular, missing sections have hampered our ability to test ideas about orbital-scale controls on the monsoon, the causes of millennial-scale events and relationships between changes in the monsoon and climate in other regions. Here we present an absolute-dated oxygen isotope record from Sanbao cave, central China, that completes a Chinese-cave-based record of the strength of the East Asian monsoon that covers the past 224,000 years. The record is dominated by 23,000-year-long cycles that are synchronous within dating errors with summer insolation at 65 degrees N (ref. 10), supporting the idea that tropical/subtropical monsoons respond dominantly and directly to changes in Northern Hemisphere summer insolation on orbital timescales. The cycles are punctuated by millennial-scale strong-summer-monsoon events (Chinese interstadials), and the new record allows us to identify the complete series of these events over the past two interglacial-glacial cycles. Their duration decreases and their frequency increases during glacial build-up in both the last and penultimate glacial periods, indicating that ice sheet size affects their character and pacing. The ages of the events are exceptionally well constrained and may thus serve as benchmarks for correlating and calibrating climate records.

David Frank,  Jed Kaplan,  Jan Esper … (2011)
Climate variations influenced the agricultural productivity, health risk, and conflict level of preindustrial societies. Discrimination between environmental and anthropogenic impacts on past civilizations, however, remains difficult because of the paucity of high-resolution paleoclimatic evidence. We present tree ring-based reconstructions of central European summer precipitation and temperature variability over the past 2500 years. Recent warming is unprecedented, but modern hydroclimatic variations may have at times been exceeded in magnitude and duration. Wet and warm summers occurred during periods of Roman and medieval prosperity. Increased climate variability from ~250 to 600 C.E. coincided with the demise of the western Roman Empire and the turmoil of the Migration Period. Such historical data may provide a basis for counteracting the recent political and fiscal reluctance to mitigate projected climate change.

Climate and the collapse of Maya civilization.

G H Haug (2003)
In the anoxic Cariaco Basin of the southern Caribbean, the bulk titanium content of undisturbed sediment reflects variations in riverine input and the hydrological cycle over northern tropical South America. A seasonally resolved record of titanium shows that the collapse of Maya civilization in the Terminal Classic Period occurred during an extended regional dry period, punctuated by more intense multiyear droughts centered at approximately 810, 860, and 910 A.D. These new data suggest that a century-scale decline in rainfall put a general strain on resources in the region, which was then exacerbated by abrupt drought events, contributing to the social stresses that led to the Maya demise.