Biogeography and evolution of Asian Gesneriaceae based on updated taxonomy 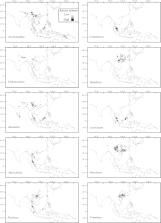 Based on an updated taxonomy of Gesneriaceae , the biogeography and evolution of the Asian Gesneriaceae are outlined and discussed. Most of the Asian Gesneriaceae belongs to Didymocarpoideae , except Titanotrichum was recently moved into Gesnerioideae . Most basal taxa of the Asian Gesneriaceae are found in the Indian subcontinent and Indo-China Peninsula, suggesting Didymocarpoideae might originate in these regions. Four species diversification centers were recognized, i.e. Sino-Vietnam regions, Malay Peninsula, North Borneo and Northwest Yunnan (Hengduan Mountains). The first three regions are dominated by limestone landscapes, while the Northwest Yunnan is well-known for its numerous deep gorges and high mountains. The places with at least 25% species are neoendemics (newly evolved and narrowly endemic) which were determined as evolutionary hotspots, including Hengduan Mountains, boundary areas of Yunnan-Guizhou-Guangxi in Southwest China, North Borneo, Pahang and Terengganu in Malay Peninsula, and mountainous areas in North Thailand, North Sulawesi Island. Finally, the underlying mechanisms for biogeographical patterns and species diversification of the Asian Gesneriaceae are discussed.

Orchid phylogenomics and multiple drivers of their extraordinary diversification

Thomas Givnish,  Daniel Spalink,  Mercedes Ames … (2015)
Orchids are the most diverse family of angiosperms, with over 25 000 species,more than mammals, birds and reptiles combined. Tests of hypotheses to account for such diversity have been stymied by the lack of a fully resolved broad-scale phylogeny. Here,we provide such a phylogeny, based on 75 chloroplast genes for 39 species representing all orchid subfamilies and 16 of 17 tribes, time-calibrated against 17 angiosperm fossils. Asupermatrix analysis places an additional 144 species based on three plastid genes. Orchids appear to have arisen roughly 112 million years ago (Mya); the subfamilies Orchidoideae and Epidendroideae diverged from each other at the end of the Cretaceous; and the eight tribes and three previously unplaced subtribes of the upper epidendroids diverged rapidly from each other between 37.9 and 30.8 Mya. Orchids appear to have undergone one significant acceleration of net species diversification in the orchidoids, and two accelerations and one deceleration in the upper epidendroids. Consistent with theory, such accelerations were correlated with the evolution of pollinia, the epiphytic habit, CAM photosynthesis, tropical distribution (especially in extensive cordilleras),and pollination via Lepidoptera or euglossine bees. Deceit pollination appears to have elevated the number of orchid species by one-half but not via acceleration of the rate of net diversification. The highest rate of net species diversification within the orchids (0.382 sp sp(-1) My(-1)) is 6.8 times that at the Asparagales crown.

Mark de Bruyn,  Björn Stelbrink,  Robert J. Morley … (2014)
Tropical Southeast (SE) Asia harbors extraordinary species richness and in its entirety comprises four of the Earth's 34 biodiversity hotspots. Here, we examine the assembly of the SE Asian biota through time and space. We conduct meta-analyses of geological, climatic, and biological (including 61 phylogenetic) data sets to test which areas have been the sources of long-term biological diversity in SE Asia, particularly in the pre-Miocene, Miocene, and Plio-Pleistocene, and whether the respective biota have been dominated by in situ diversification, immigration and/or emigration, or equilibrium dynamics. We identify Borneo and Indochina, in particular, as major "evolutionary hotspots" for a diverse range of fauna and flora. Although most of the region's biodiversity is a result of both the accumulation of immigrants and in situ diversification, within-area diversification and subsequent emigration have been the predominant signals characterizing Indochina and Borneo's biota since at least the early Miocene. In contrast, colonization events are comparatively rare from younger volcanically active emergent islands such as Java, which show increased levels of immigration events. Few dispersal events were observed across the major biogeographic barrier of Wallace's Line. Accelerated efforts to conserve Borneo's flora and fauna in particular, currently housing the highest levels of SE Asian plant and mammal species richness, are critically required. © The Author(s) 2014. Published by Oxford University Press, on behalf of the Society of Systematic Biologists. All rights reserved. For Permissions, please email: journals.permissions@oup.com.