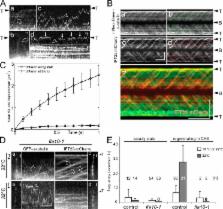 The assembly of the axoneme, the structural scaffold of cilia and flagella, requires translocation of a vast quantity of tubulin into the growing cilium, but the mechanisms that regulate the targeting, quantity, and timing of tubulin transport are largely unknown. In Chlamydomonas, GFP-tagged α-tubulin enters cilia as an intraflagellar transport (IFT) cargo and by diffusion. IFT-based transport of GFP-tubulin is elevated in growing cilia and IFT trains carry more tubulin. Cells possessing both nongrowing and growing cilia selectively target GFP-tubulin into the latter. The preferential delivery of tubulin boosts the concentration of soluble tubulin in the matrix of growing versus steady-state cilia. Cilia length mutants show abnormal kinetics of tubulin transport. We propose that cells regulate the extent of occupancy of IFT trains by tubulin cargoes. During ciliary growth, IFT concentrates soluble tubulin in cilia and thereby promotes elongation of the axonemal microtubules.

P Koumoutsakos,  Ivo Sbalzarini (2005)
This paper presents a computationally efficient, two-dimensional, feature point tracking algorithm for the automated detection and quantitative analysis of particle trajectories as recorded by video imaging in cell biology. The tracking process requires no a priori mathematical modeling of the motion, it is self-initializing, it discriminates spurious detections, and it can handle temporary occlusion as well as particle appearance and disappearance from the image region. The efficiency of the algorithm is validated on synthetic video data where it is compared to existing methods and its accuracy and precision are assessed for a wide range of signal-to-noise ratios. The algorithm is well suited for video imaging in cell biology relying on low-intensity fluorescence microscopy. Its applicability is demonstrated in three case studies involving transport of low-density lipoproteins in endosomes, motion of fluorescently labeled Adenovirus-2 particles along microtubules, and tracking of quantum dots on the plasma membrane of live cells. The present automated tracking process enables the quantification of dispersive processes in cell biology using techniques such as moment scaling spectra.

[1 ]Department of Cellular Biology and [2 ]College of Engineering, University of Georgia, Athens, GA 30602