Development of a Virtual Reality Assessment of Everyday Living Skills 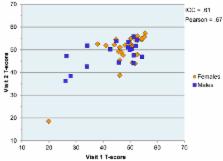 Cognitive impairments affect the majority of patients with schizophrenia and these impairments predict poor long term psychosocial outcomes.  Treatment studies aimed at cognitive impairment in patients with schizophrenia not only require demonstration of improvements on cognitive tests, but also evidence that any cognitive changes lead to clinically meaningful improvements.  Measures of “functional capacity” index the extent to which individuals have the potential to perform skills required for real world functioning.  Current data do not support the recommendation of any single instrument for measurement of functional capacity.  The Virtual Reality Functional Capacity Assessment Tool (VRFCAT) is a novel, interactive gaming based measure of functional capacity that uses a realistic simulated environment to recreate routine activities of daily living. Studies are currently underway to evaluate and establish the VRFCAT’s sensitivity, reliability, validity, and practicality. This new measure of functional capacity is practical, relevant, easy to use, and has several features that improve validity and sensitivity of measurement of function in clinical trials of patients with CNS disorders.

What are the functional consequences of neurocognitive deficits in schizophrenia?

Douglas R. Green (1996)
It has been well established that schizophrenic patients have neurocognitive deficits, but it is not known how these deficits influence the daily lives of patients. The goal of this review was to determine which, if any, neurocognitive deficits restrict the functioning of schizophrenic patients in the outside world. The author reviewed studies that have evaluated neurocognitive measures as predictors and correlates of functional outcome for schizophrenic patients. The review included 1) studies that have prospectively evaluated specific aspects of neurocognition and community (e.g., social and vocational) functioning (six studies), 2) all known studies of neurocognitive correlates of social problem solving (five studies), and 3) all known studies of neurocognitive correlates and predictors of psychosocial skill acquisition (six studies). Despite wide variation among studies in the selection of neurocognitive measures, some consistencies emerged. The most consistent finding was that verbal memory was associated with all types of functional outcome. Vigilance was related to social problem solving and skill acquisition. Card sorting predicted community functioning but not social problem solving. Negative symptoms were associated with social problem solving but not skill acquisition. Notably, psychotic symptoms were not significantly associated with outcome measures in any of the studies reviewed. Verbal memory and vigilance appear to be necessary for adequate functional outcome. Deficiencies in these areas may prevent patients from attaining optimal adaptation and hence act as "neurocognitive rate-limiting factors." On the basis of this review of the literature, a series of hypotheses are offered for follow-up studies.

Evidence-based health policy--lessons from the Global Burden of Disease Study.

Neurocognitive deficit in schizophrenia: a quantitative review of the evidence.

This is an open-access article distributed under the terms of the Creative Commons Attribution-NonCommercial License, which permits non-commercial use, distribution, and reproduction, provided the original work is properly cited.