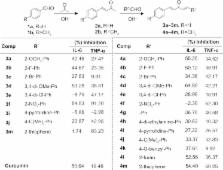 A novel class of asymmetric mono-carbonyl analogs of curcumin (AMACs) were synthesized and screened for anti-inflammatory activity. These analogs are chemically stable as characterized by UV absorption spectra. In vitro, compounds 3f, 3m, 4b, and 4d markedly inhibited lipopolysaccharide (LPS)-induced expression of pro-inflammatory cytokines tumor necrosis factor-α and interleukin-6 in a dose-dependent manner, with IC 50 values in low micromolar range. In vivo, compound 3f demonstrated potent preventive and therapeutic effects on LPS-induced sepsis in mouse model. Compound 3f downregulated the phosphorylation of extracellular signal-regulated kinase (ERK)1/2 MAPK and suppressed IκBα degradation, which suggests that the possible anti-inflammatory mechanism of compound 3f may be through downregulating nuclear factor kappa binding (NF-κB) and ERK pathways. Also, we solved the crystal structure of compound 3e to confirm the asymmetrical structure. The quantitative structure–activity relationship analysis reveals that the electron-withdrawing substituents on aromatic ring of lead structures could improve activity. These active AMACs represent a new class of anti-inflammatory agents with improved stability, bioavailability, and potency compared to curcumin. Our results suggest that 3f may be further developed as a potential agent for prevention and treatment of sepsis or other inflammation-related diseases.

Optimization of parameters for semiempirical methods V: Modification of NDDO approximations and application to 70 elements

James J. P. Stewart (2007)
Several modifications that have been made to the NDDO core-core interaction term and to the method of parameter optimization are described. These changes have resulted in a more complete parameter optimization, called PM6, which has, in turn, allowed 70 elements to be parameterized. The average unsigned error (AUE) between calculated and reference heats of formation for 4,492 species was 8.0 kcal mol−1. For the subset of 1,373 compounds involving only the elements H, C, N, O, F, P, S, Cl, and Br, the PM6 AUE was 4.4 kcal mol−1. The equivalent AUE for other methods were: RM1: 5.0, B3LYP 6–31G*: 5.2, PM5: 5.7, PM3: 6.3, HF 6–31G*: 7.4, and AM1: 10.0 kcal mol−1. Several long-standing faults in AM1 and PM3 have been corrected and significant improvements have been made in the prediction of geometries. Figure Calculated structure of the complex ion [Ta6Cl12]2+ (footnote): Reference value in parenthesis Electronic supplementary material The online version of this article (doi:10.1007/s00894-007-0233-4) contains supplementary material, which is available to authorized users.

The role of exercise and PGC1alpha in inflammation and chronic disease.

Bruce M Spiegelman,  Christoph Handschin (2008)
Inadequate physical activity is linked to many chronic diseases. But the mechanisms that tie muscle activity to health are unclear. The transcriptional coactivator PGC1alpha has recently been shown to regulate several exercise-associated aspects of muscle function. We propose that this protein controls muscle plasticity, suppresses a broad inflammatory response and mediates the beneficial effects of exercise.

Eric Bolton,  Emma Downs,  Neil C. Tomson … (2001)
Chronic renal failure (CRF) is associated with an increased risk of ischaemic heart disease (IHD), but the mechanisms responsible are controversial. We investigated the relationship of two sets of candidate mechanisms-indices of LDL oxidation and markers of inflammatory activity-with vascular endothelial dysfunction (VED). We carried out cross-sectional analysis of 23 dialysed and 16 non-dialysed CRF patients, 28 healthy controls, and 20 patients with stable angina and normal renal function. The following were determined: (i) LDL oxidation by Cu(2+) and ultraviolet light, serum autoantibodies to oxidized LDL (oxLDL); (ii) forearm flow-mediated vasodilatation, plasma concentrations of adhesion molecules, and von Willebrand factor (vWF); and (iii) circulating levels of TNF-alpha and IL-6, C-reactive protein (CRP), and fibrinogen. Endothelium-dependent vasodilatation (EDV) was lower in angina, pre-dialysis, and dialysis CRF patients than in controls (all P<0.005). Compared with controls, vWf (P<0.005) and adhesion molecules (vCAM-1, P<0.005; iCAM-1, P=0.01; E-selectin, P=0.05) were raised in dialysis, and vCAM-1 (P=0.01) in pre-dialysis CRF patients. Dialysed patients had lower HDL cholesterol (P=0.01) and higher triglyceride (P=0.05) than controls, but LDL-oxidation was similar in all groups. Autoantibodies to oxLDL were raised in angina (P<0.005) and pre-dialysis (P=0.006), but were absent in most dialysed patients. Concentrations of IL-6, TNF-alpha, CRP and fibrinogen were elevated in CRF compared with control and angina patients (P<0.005). In the whole population, IL-6 and TNF-alpha correlated negatively with EDV, HDL cholesterol, and positively with triglyceride, blood pressure, vWf, iCAM-1, vCAM-1 and E-selectin (r=-0.43 to +0.70, all P<0.05). Endothelial dysfunction is unrelated to LDL oxidation, suggesting that LDL oxidation might not be a major cause of VED in CRF. In contrast VED was more severe in CRF than in angina patients and is associated with increased acute-phase proteins and plasma cytokines, demonstrating a chronic inflammatory state. These observations may explain the VED and increased IHD risk of patients with CRF.