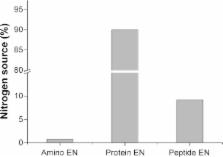 Fifty-nine hospitals in the People’s Republic of China participated in a nutrition survey. The resulting information on nutritional support was analyzed.

Despite recent improvements in the application of nutritional support in the People’s Republic of China, a much higher percentage of nitrogen and lipids is delivered through PN than through EN. Furthermore, there are marked regional, departmental, and disease-based differences in the selection of PN versus EN. The rationale for use of nutritional support needs to be improved.

K. Jauch,  E. R. Kuse,  Eric M Kemen … (2006)
Enhanced recovery of patients after surgery ("ERAS") has become an important focus of perioperative management. From a metabolic and nutritional point of view, the key aspects of perioperative care include: Enteral nutrition (EN) by means of oral nutritional supplements (ONS) and if necessary tube feeding (TF) offers the possibility of increasing or ensuring nutrient intake in cases where food intake is inadequate. These guidelines are intended to give evidence-based recommendations for the use of ONS and TF in surgical patients. They were developed by an interdisciplinary expert group in accordance with officially accepted standards and are based on all relevant publications since 1980. The guideline was discussed and accepted in a consensus conference. EN is indicated even in patients without obvious undernutrition, if it is anticipated that the patient will be unable to eat for more than 7 days perioperatively. It is also indicated in patients who cannot maintain oral intake above 60% of recommended intake for more than 10 days. In these situations nutritional support should be initiated without delay. Delay of surgery for preoperative EN is recommended for patients at severe nutritional risk, defined by the presence of at least one of the following criteria: weight loss >10-15% within 6 months, BMI<18.5 kg/m(2), Subjective Global Assessment Grade C, serum albumin <30 g/l (with no evidence of hepatic or renal dysfunction). Altogether, it is strongly recommended not to wait until severe undernutrition has developed, but to start EN therapy early, as soon as a nutritional risk becomes apparent.

Mohammed Al-Omran (corresponding) ,  Zaina Albalawi,  Mariam Tashkandi … (2010)
Acute pancreatitis creates a catabolic stress state promoting a systemic inflammatory response and nutritional deterioration. Adequate supply of nutrients plays an important role in recovery. Total parenteral nutrition (TPN) has been standard practice for providing exogenous nutrients to patients with severe acute pancreatitis. However, recent data suggest that enteral nutrition (EN) is not only feasible, but safer and more effective.Therefore, we sought to update our systematic review to re-evaluate the level of evidence. To compare the effect of TPN versus EN on mortality, morbidity and length of hospital stay in patients with acute pancreatitis. Trials were identified by computerized searches of The Cochrane Controlled Trials Register, MEDLINE, and EMBASE. Additional studies were identified by searching Scisearch, bibliographies of review articles and identified trials. The search was undertaken in August 2000 and updated in September 2002, October 2003, November 2004 and November 2008. No language restrictions were applied. Randomized clinical trials comparing TPN to EN in patients with acute pancreatitis. Two reviewers independently abstracted data and assessed trial quality. A standardized form was used to extract relevant data. Eight trials with a total of 348 participants were included. Comparing EN to TPN for acute pancreatitis, the relative risk (RR) for death was 0.50 (95% CI 0.28 to 0.91), for multiple organ failure (MOF) was 0.55 (95% CI 0.37 to 0.81), for systemic infection was 0.39 (95% CI 0.23 to 0.65), for operative interventions was 0.44 (95% CI 0.29 to 0.67), for local septic complications was 0.74 (95% CI 0.40 to 1.35), and for other local complications was 0.70 (95% CI 0.43 to 1.13). Mean length of hospital stay was reduced by 2.37 days in EN vs TPN groups (95% CI -7.18 to 2.44). Furthermore, a subgroup analysis for EN vs TPN in patients with severe acute pancreatitis showed a RR for death of 0.18 (95% CI 0.06 to 0.58) and a RR for MOF of 0.46 (95% CI 0.16 to 1.29). In patients with acute pancreatitis, enteral nutrition significantly reduced mortality, multiple organ failure, systemic infections, and the need for operative interventions compared to those who received TPN. In addition, there was a trend towards a reduction in length of hospital stay. These data suggest that EN should be considered the standard of care for patients with acute pancreatitis requiring nutritional support.

A metaanalysis of treatment outcomes of early enteral versus early parenteral nutrition in hospitalized patients.

Jennifer L. Moran,  Robert J Hughes,  John Victor Peter (2004)
Nutritional support as enteral or parenteral nutrition (PN) is used in hospitalized patients to reduce catabolism. This study compares outcomes of early enteral nutrition (EN) with early PN in hospitalized patients. The authors conducted a metaanalysis of randomized, controlled trials (RCT) comparing early EN with PN. Studies on immunonutrition were excluded. Studies were categorized as medical, surgical, or trauma. RCTs of early EN/PN were identified by search of 1) MEDLINE (1966-2002), 2) published abstracts from scientific meetings, and 3) bibliographies of relevant articles. Thirty RCTs (ten medical, 11 surgical, and nine trauma) compared early EN with PN. The effect of nutrition type on hospital mortality and complication rates was reported as risk difference (RD%) and hospital length of stay (LOS) as mean weighted difference (MWD days). Missing data, by outcomes, varied from 20% to 63%. As a result of heterogeneity of treatment effects, the DerSimonian-Laird random-effects estimator was reported. There was no differential treatment effect of nutrition type on hospital mortality for all patients (0.6%, p = .4) and subgroups. PN was associated with increases in infective complications (7.9%, p = .001), catheter-related blood stream infections (3.5%, p = .003), noninfective complications (4.9%, p = .04), and hospital LOS (1.2 days, p = .004). There was no effect of nutrition type on technical complications (4.1%, p = .2). EN was associated with a significant increase in diarrheal episodes (8.7%, p = .001). Publication bias was not demonstrated. Metaanalytic regression analysis did not demonstrate any effect of age, time to initiate treatment, and average albumin on mortality estimates. Cumulative metaanalysis showed no change in the mortality estimates with time. There was no mortality effect with the type of nutritional supplementation. Although early EN significantly reduced complication rates, this needs to be interpreted in the light of missing data and heterogeneity. The enthusiasm that early EN, as compared with early PN, would reduce mortality appears misplaced.