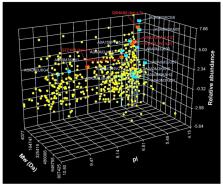 Anisakis simplex third-stage larvae are the main source of hidden allergens in marine fish products. Some Anisakis allergens are thermostable and, even highly processed, could cause hypersensitivity reactions. However, Anisakis proteome has not been studied under autoclaving conditions of 121 °C for 60 min, which is an important process in the food industry. The aim of the study was the identification and characterization of allergens, potential allergens, and other proteins of heat-treated A. simplex larvae. Liquid chromatography-tandem mass spectrometry (LC-MS/MS) was used to identify 470 proteins, including allergens—Ani s 1, Ani s 2, Ani s 3, Ani s 4, Ani s 5—and 13 potential allergens that were mainly homologs of Anisakis spp., Ascaris spp., and Acari allergens. Ani s 2, Ani s 3, Ani s 5, and three possible allergens were found among the top 25 most abundant proteins. The computational analysis allowed us to detect allergen epitopes, assign protein families, and domains as well as to annotate the localization of proteins. The predicted 3D models of proteins revealed similarities between potential allergens and homologous allergens. Despite the partial degradation of heated A. simplex antigens, their immunoreactivity with anti- A. simplex IgG antibodies was confirmed using a Western blot. In conclusion, identified epitopes of allergenic peptides highlighted that the occurrence of Anisakis proteins in thermally processed fish products could be a potential allergic hazard. Further studies are necessary to confirm the IgE immunoreactivity and thermostability of identified proteins.

Stefan Hofmann,  H Feder (1998)
Molecular chaperones, including the heat-shock proteins (Hsps), are a ubiquitous feature of cells in which these proteins cope with stress-induced denaturation of other proteins. Hsps have received the most attention in model organisms undergoing experimental stress in the laboratory, and the function of Hsps at the molecular and cellular level is becoming well understood in this context. A complementary focus is now emerging on the Hsps of both model and nonmodel organisms undergoing stress in nature, on the roles of Hsps in the stress physiology of whole multicellular eukaryotes and the tissues and organs they comprise, and on the ecological and evolutionary correlates of variation in Hsps and the genes that encode them. This focus discloses that (a) expression of Hsps can occur in nature, (b) all species have hsp genes but they vary in the patterns of their expression, (c) Hsp expression can be correlated with resistance to stress, and (d) species' thresholds for Hsp expression are correlated with levels of stress that they naturally undergo. These conclusions are now well established and may require little additional confirmation; many significant questions remain unanswered concerning both the mechanisms of Hsp-mediated stress tolerance at the organismal level and the evolutionary mechanisms that have diversified the hsp genes.

The evolutionary and ecological role of heat shock proteins

Malcolm Kennedy,  M Audicana (2008)
Infection of humans with the nematode worm parasite Anisakis simplex was first described in the 1960s in association with the consumption of raw or undercooked fish. During the 1990s it was realized that even the ingestion of dead worms in food fish can cause severe hypersensitivity reactions, that these may be more prevalent than infection itself, and that this outcome could be associated with food preparations previously considered safe. Not only may allergic symptoms arise from infection by the parasites ("gastroallergic anisakiasis"), but true anaphylactic reactions can also occur following exposure to allergens from dead worms by food-borne, airborne, or skin contact routes. This review discusses A. simplex pathogenesis in humans, covering immune hypersensitivity reactions both in the context of a living infection and in terms of exposure to its allergens by other routes. Over the last 20 years, several studies have concentrated on A. simplex antigen characterization and innate as well as adaptive immune response to this parasite. Molecular characterization of Anisakis allergens and isolation of their encoding cDNAs is now an active field of research that should provide improved diagnostic tools in addition to tools with which to enhance our understanding of pathogenesis and controversial aspects of A. simplex allergy. We also discuss the potential relevance of parasite products such as allergens, proteinases, and proteinase inhibitors and the activation of basophils, eosinophils, and mast cells in the induction of A. simplex-related immune hypersensitivity states induced by exposure to the parasite, dead or alive.