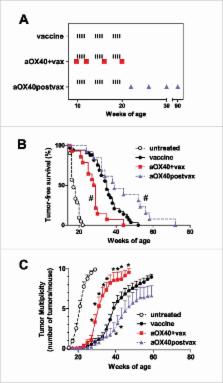 This study evaluated the effects of combining an OX40 agonistic antibody (aOX40) with a cell vaccine targeting HER2/neu, called “Triplex”. Such HER2/neu cell vaccine included two biological adjuvants (interleukin 12 (IL12) and allogeneic histocompatibility antigens) and was previously found able to prevent autochthonous HER2/neu-driven mammary carcinogenesis. Timing of aOX40 administration, concomitantly or after cell vaccination, gave opposite results. Unexpectedly, vaccine efficacy was hampered by concomitant OX40 triggering. Such decreased immunoprevention was likely due to a reduced induction of anti-HER2/neu antibodies and to a higher level of Treg activation. On the contrary, aOX40 administration after the completion of vaccination slightly but significantly increased immunopreventive vaccine efficacy, and led to increased production of GM-CSF and IL10. In conclusion, OX40 triggering can either impair or ameliorate immunoprevention of HER2/neu-driven mammary carcinogenesis depending on the schedule of aOX40 administration.

Silvia Piconese,  Barbara Valzasina,  Mario P. Colombo (2008)
Regulatory T (T reg) cells are the major obstacle to cancer immunotherapy, and their depletion promptly induces conversion of peripheral precursors into T reg cells. We show that T reg cells can be functionally inactivated by OX40 triggering. In tumors, the vast majority of CD4+ T cells are Foxp3+ and OX40bright. However, intratumor injection of the agonist anti-OX40 monoclonal antibody (mAb) OX86, but not anti-CD25 mAb, induces tumor rejection in 80% of mice, an effect that is abrogated by CD8 depletion. Upon intratumor OX40 triggering, increased numbers of infiltrating dendritic cells (DCs) migrate to draining lymph nodes and generate a new wave of tumor-specific cytotoxic T lymphocytes, as detected by tetramer and CD44 staining of node CD8+ T lymphocytes. Tumor-bearing Rag1-knockout (KO) mice reconstituted with OX40-deficient T reg cells and wild-type (WT) effector T cells, or the reciprocal combination, showed that both T reg and effector T cells must be triggered via OX40 for the tumor to be rejected. Accordingly, WT but not OX40-KO mice receiving intratumor coinjection of OX86 and ovalbumin protein were able to revert tumor-induced tolerization of adoptively transferred OX40-competent OTII T lymphocytes. In conclusion, OX40-mediated inactivation of T reg cell function unleashes nearby DCs, allowing them to induce an adaptive immune response. In addition, the known OX40-dependent delivery of fitness signals to activated T cells is boosted by concurrent T reg cell inhibition. OX40 triggering thus has multiple effects that converge to mediate tumor rejection.

Idit Sagiv-Barfi,  Ronald Levy,  Sanjiv Gambhir … (2018)
It has recently become apparent that the immune system can cure cancer. In some of these strategies, the antigen targets are preidentified and therapies are custom-made against these targets. In others, antibodies are used to remove the brakes of the immune system, allowing preexisting T cells to attack cancer cells. We have used another noncustomized approach called in situ vaccination. Immunoenhancing agents are injected locally into one site of tumor, thereby triggering a T cell immune response locally that then attacks cancer throughout the body. We have used a screening strategy in which the same syngeneic tumor is implanted at two separate sites in the body. One tumor is then injected with the test agents, and the resulting immune response is detected by the regression of the distant, untreated tumor. Using this assay, the combination of unmethylated CG–enriched oligodeoxynucleotide (CpG)—a Toll-like receptor 9 (TLR9) ligand—and anti-OX40 antibody provided the most impressive results. TLRs are components of the innate immune system that recognize molecular patterns on pathogens. Low doses of CpG injected into a tumor induce the expression of OX40 on CD4+ T cells in the microenvironment in mouse or human tumors. An agonistic anti-OX40 antibody can then trigger a T cell immune response, which is specific to the antigens of the injected tumor. Remarkably, this combination of a TLR ligand and an anti-OX40 antibody can cure multiple types of cancer and prevent spontaneous genetically driven cancers.

Yannick Bulliard,  Rose Jolicoeur,  Jimin Zhang … (2014)
Antibodies targeting checkpoint inhibitors or co-stimulatory receptors on T cells have shown significant antitumor efficacy in preclinical and clinical studies. In mouse tumor models, engagement of activating Fcγ receptor (FcγR)-expressing immune cells was recently shown to be required for the tumoricidal activity of antibodies recognizing the tumor necrosis factor superfamily receptor (TNFR) GITR (CD357) and CTLA-4 (CD152). In particular, activating FcγRs facilitated the selective elimination of intratumoral T-cell populations. However, it remains unclear whether FcγRs contribute to the antitumor efficacy of other immunomodulatory antibodies. Here, we explored the mechanism of antitumor activity mediated by an agonistic antibody (clone OX86) to the co-stimulatory TNFR OX40 (CD134). OX40 was highly expressed by intratumoral T cells, particularly those of the FoxP3(+) regulatory T-cell (Treg) lineage. OX86 administration resulted in the depletion of intratumoral regulatory T cells in an activating FcγR-dependent manner, which correlated with tumor regression. Together with previous data from our group and others, these findings support a mechanism whereby antibodies targeting antigens highly expressed by intratumoral T cells can mediate their elimination by FcγR-expressing immune cells, and facilitate subsequent antitumor immunity.