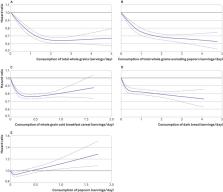 To examine the associations between the intake of total and individual whole grain foods and the risk of type 2 diabetes.

Self-reports of incident type 2 diabetes by participants identified through follow-up questionnaires and confirmed by a validated supplementary questionnaire.

During 4 618 796 person years of follow-up, 18 629 participants with type 2 diabetes were identified. Total whole grain consumption was categorized into five equal groups of servings a day for the three cohorts. After adjusting for lifestyle and dietary risk factors for diabetes, participants in the highest category for total whole grain consumption had a 29% (95% confidence interval 26% to 33%) lower rate of type 2 diabetes compared with those in the lowest category. For individual whole grain foods, pooled hazard ratios (95% confidence intervals) for type 2 diabetes in participants consuming one or more servings a day compared with those consuming less than one serving a month were 0.81 (0.77 to 0.86) for whole grain cold breakfast cereal, 0.79 (0.75 to 0.83) for dark bread, and 1.08 (1.00 to 1.17) for popcorn. For other individual whole grains with lower average intake levels, comparing consumption of two or more servings a week with less than one serving a month, the pooled hazard ratios (95% confidence intervals) were 0.79 (0.75 to 0.83) for oatmeal, 0.88 (0.82 to 0.94) for brown rice, 0.85 (0.80 to 0.90) for added bran, and 0.88 (0.78 to 0.98) for wheat germ. Spline regression showed a non-linear dose-response association between total whole grain intake and the risk of type 2 diabetes where the rate reduction slightly plateaued at more than two servings a day (P<0.001 for curvature). For whole grain cold breakfast cereal and dark bread, the rate reduction plateaued at about 0.5 servings a day. For consumption of popcorn, a J shaped association was found where the rate of type 2 diabetes was not significantly raised until consumption exceeded about one serving a day. The association between higher total whole grain intake and lower risk of type 2 diabetes was stronger in individuals who were lean than in those who were overweight or obese (P=0.003 for interaction), and the associations did not vary significantly across levels of physical activity, family history of diabetes, or smoking status.

Matthias B. Schulze (2004)
Sugar-sweetened beverages like soft drinks and fruit punches contain large amounts of readily absorbable sugars and may contribute to weight gain and an increased risk of type 2 diabetes, but these relationships have been minimally addressed in adults. To examine the association between consumption of sugar-sweetened beverages and weight change and risk of type 2 diabetes in women. Prospective cohort analyses conducted from 1991 to 1999 among women in the Nurses' Health Study II. The diabetes analysis included 91,249 women free of diabetes and other major chronic diseases at baseline in 1991. The weight change analysis included 51,603 women for whom complete dietary information and body weight were ascertained in 1991, 1995, and 1999. We identified 741 incident cases of confirmed type 2 diabetes during 716,300 person-years of follow-up. Weight gain and incidence of type 2 diabetes. Those with stable consumption patterns had no difference in weight gain, but weight gain over a 4-year period was highest among women who increased their sugar-sweetened soft drink consumption from 1 or fewer drinks per week to 1 or more drinks per day (multivariate-adjusted means, 4.69 kg for 1991 to 1995 and 4.20 kg for 1995 to 1999) and was smallest among women who decreased their intake (1.34 and 0.15 kg for the 2 periods, respectively) after adjusting for lifestyle and dietary confounders. Increased consumption of fruit punch was also associated with greater weight gain compared with decreased consumption. After adjustment for potential confounders, women consuming 1 or more sugar-sweetened soft drinks per day had a relative risk [RR] of type 2 diabetes of 1.83 (95% confidence interval [CI], 1.42-2.36; P or =1 drink per day compared with <1 drink per month, 2.00; 95% CI, 1.33-3.03; P =.001). Higher consumption of sugar-sweetened beverages is associated with a greater magnitude of weight gain and an increased risk for development of type 2 diabetes in women, possibly by providing excessive calories and large amounts of rapidly absorbable sugars.

Food-based validation of a dietary questionnaire: the effects of week-to-week variation in food consumption.

B Rosner,  S Salvini,  M Stampfer … (1989)
The reproducibility and validity of responses for 55 specific foods and beverages on a self-administered food frequency questionnaire were evaluated. One hundred and seventy three women from the Nurses' Health Study completed the questionnaire twice approximately 12 months apart and also recorded their food consumption for seven consecutive days, four times during the one-year interval. For the 55 foods, the mean of correlation coefficients between frequencies of intake for first versus second questionnaire was 0.57 (range = 0.24 for fruit punch to 0.93 for beer). The mean of correlation coefficients between the dietary records and first questionnaire was 0.44 (range = 0.09 for yellow squash to 0.83 for beer and tea) and between the dietary records and the second questionnaire was 0.52 (range = 0.08 for spinach to 0.90 for tea). Ratios of within- to between-person variance for the 55 foods were computed using the mean four one-week dietary records for each person as replicate measurements. For most foods this ratio was greater than 1.0 (geometric mean of ratios = 1.88), ranging from 0.25 (skimmed milk) to 14.76 (spinach). Correlation coefficients comparing questionnaire and dietary record for the 55 foods were corrected for the within-person variation (mean corrected value = 0.55 for dietary record versus first questionnaire and 0.66 versus the second). Mean daily amounts of each food calculated by the questionnaire and by the dietary record were also compared; the observed differences suggested that responses to the questionnaire tended to over-represent socially desirable foods. This analysis documents the validity and reproducibility of the questionnaire for measuring specific foods and beverages, as well as the large within-person variation for food intake measured by dietary records. Differences in the degree of validity for specific foods revealed in this type of analysis can be useful in improving questionnaire design and in interpreting findings from epidemiological studies that use the instrument.

A Ascherio,  D Spiegelman,  E Rimm … (1999)
Previous cohort studies of fat intake and risk of coronary heart disease (CHD) have been inconsistent, probably due in part to methodological differences and various limitations, including inadequate dietary assessment and incomplete adjustment for total energy intake. The authors analyzed repeated assessment of diet from the Nurses' Health Study to examine the associations between intakes of four major types of fat (saturated, monounsaturated, polyunsaturated, and trans fats) and risk of CHD during 14 years of follow-up (1980-1994) by using alternative methods for energy adjustment. In particular, the authors compared four risk models for energy adjustment: the standard multivariate model, the energy-partition model, the nutrient residual model, and the multivariate nutrient density model. Within each model, the authors compared four different approaches for analyzing repeated dietary measurements: baseline diet only, the most recent diet, and two different algorithms for calculating cumulative average diets. The substantive results were consistent across all models; that is, higher intakes of saturated and trans fats were associated with increased risk of CHD, while higher intakes of monounsaturated and polyunsaturated fats were associated with reduced risk. When nutrients were considered as continuous variables, the four energy-adjustment methods yielded similar associationS. However, the interpretation of the relative risks differed across models. In addition, within each model, the methods using the cumulative averages in general yielded stronger associations than did those using either only baseline diet or the most recent diet. When the nutrients were categorized according to quintiles, the residual and the nutrient density models, which gave similar results, yielded statistically more significant tests for linear trend than did the standard and the partition models.

This is an Open Access article distributed in accordance with the Creative Commons Attribution Non Commercial (CC BY-NC 4.0) license, which permits others to distribute, remix, adapt, build upon this work non-commercially, and license their derivative works on different terms, provided the original work is properly cited and the use is non-commercial. See: http://creativecommons.org/licenses/by-nc/4.0/.