Altitude adaptation in Tibet caused by introgression of Denisovan-like DNA 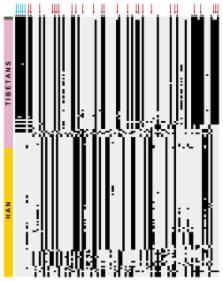 The complete genome sequence of a Neandertal from the Altai Mountains

Kay Prüfer,  Fernando Racimo,  Nick Patterson … (2014)
We present a high-quality genome sequence of a Neandertal woman from Siberia. We show that her parents were related at the level of half siblings and that mating among close relatives was common among her recent ancestors. We also sequenced the genome of a Neandertal from the Caucasus to low coverage. An analysis of the relationships and population history of available archaic genomes and 25 present-day human genomes shows that several gene flow events occurred among Neandertals, Denisovans and early modern humans, possibly including gene flow into Denisovans from an unknown archaic group. Thus, interbreeding, albeit of low magnitude, occurred among many hominin groups in the Late Pleistocene. In addition, the high quality Neandertal genome allows us to establish a definitive list of substitutions that became fixed in modern humans after their separation from the ancestors of Neandertals and Denisovans.

A high-coverage genome sequence from an archaic Denisovan individual.

Arti Tandon,  Flora Jay,  C Alkan … (2012)
We present a DNA library preparation method that has allowed us to reconstruct a high-coverage (30×) genome sequence of a Denisovan, an extinct relative of Neandertals. The quality of this genome allows a direct estimation of Denisovan heterozygosity indicating that genetic diversity in these archaic hominins was extremely low. It also allows tentative dating of the specimen on the basis of "missing evolution" in its genome, detailed measurements of Denisovan and Neandertal admixture into present-day human populations, and the generation of a near-complete catalog of genetic changes that swept to high frequency in modern humans since their divergence from Denisovans.

Nick Patterson,  David Reich,  Sarah Durand … (2011)
One enduring question in evolutionary biology is the extent of archaic admixture in the genomes of present-day populations. In this paper, we present a test for ancient admixture that exploits the asymmetry in the frequencies of the two nonconcordant gene trees in a three-population tree. This test was first applied to detect interbreeding between Neandertals and modern humans. We derive the analytic expectation of a test statistic, called the D statistic, which is sensitive to asymmetry under alternative demographic scenarios. We show that the D statistic is insensitive to some demographic assumptions such as ancestral population sizes and requires only the assumption that the ancestral populations were randomly mating. An important aspect of D statistics is that they can be used to detect archaic admixture even when no archaic sample is available. We explore the effect of sequencing error on the false-positive rate of the test for admixture, and we show how to estimate the proportion of archaic ancestry in the genomes of present-day populations. We also investigate a model of subdivision in ancestral populations that can result in D statistics that indicate recent admixture.