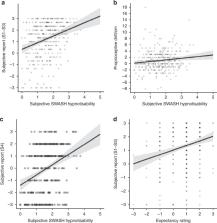 In hypnotic responding, expectancies arising from imaginative suggestion drive striking experiential changes (e.g., hallucinations) — which are experienced as involuntary — according to a normally distributed and stable trait ability (hypnotisability). Such experiences can be triggered by implicit suggestion and occur outside the hypnotic context. In large sample studies (of 156, 404 and 353 participants), we report substantial relationships between hypnotisability and experimental measures of experiential change in mirror-sensory synaesthesia and the rubber hand illusion comparable to relationships between hypnotisability and individual hypnosis scale items. The control of phenomenology to meet expectancies arising from perceived task requirements can account for experiential change in psychological experiments.

The authors present large sample studies showing substantial relationships between measures of embodiment (the rubber hand illusion and mirror synaesthesia) and trait imaginative suggestibility in the hypnotic context. These measures of striking experiential change may therefore be confounded by suggestion effects.

That's my hand! Activity in premotor cortex reflects feeling of ownership of a limb.

H. Ehrsson, Charles Spence, Richard E. Passingham (2004)
When we look at our hands, we immediately know that they are part of our own body. This feeling of ownership of our limbs is a fundamental aspect of self-consciousness. We have studied the neuronal counterparts of this experience. A perceptual illusion was used to manipulate feelings of ownership of a rubber hand presented in front of healthy subjects while brain activity was measured by functional magnetic resonance imaging. The neural activity in the premotor cortex reflected the feeling of ownership of the hand. This suggests that multisensory integration in the premotor cortex provides a mechanism for bodily self-attribution.

On the social psychology of the psychological experiment: With particular reference to demand characteristics and their implications.

Perception of Body Ownership Is Driven by Bayesian Sensory Inference

Majed Samad, Albert Chung, Ladan Shams (2015)
Recent studies have shown that human perception of body ownership is highly malleable. A well-known example is the rubber hand illusion (RHI) wherein ownership over a dummy hand is experienced, and is generally believed to require synchronized stroking of real and dummy hands. Our goal was to elucidate the computational principles governing this phenomenon. We adopted the Bayesian causal inference model of multisensory perception and applied it to visual, proprioceptive, and tactile stimuli. The model reproduced the RHI, predicted that it can occur without tactile stimulation, and that synchronous stroking would enhance it. Various measures of ownership across two experiments confirmed the predictions: a large percentage of individuals experienced the illusion in the absence of any tactile stimulation, and synchronous stroking strengthened the illusion. Altogether, these findings suggest that perception of body ownership is governed by Bayesian causal inference—i.e., the same rule that appears to govern the perception of outside world.