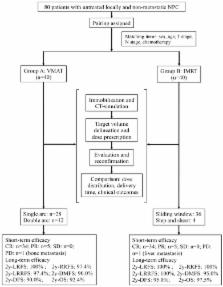 Background: The purpose of this study is to assess the feasibility of volumetric-modulated arc therapy (VMAT) for nasopharyngeal carcinoma (NPC) patients by comparing the physical dosimetry, delivery efficiency and clinical outcomes with intensity-modulated radiotherapy (IMRT).

Conclusions: Both VMAT and IMRT can meet the clinical requirements for the treatment of NPC. The short-term tumor regression rates and 2-year survival rates with the two techniques are comparable. The faster treatment time benefits of VMAT will enable more patients to receive precision radiotherapy.

The American Joint Committee on Cancer: the 7th edition of the AJCC cancer staging manual and the future of TNM.

C Compton,  Albert Edge (2010)
The American Joint Committee on Cancer and the International Union for Cancer Control update the tumor-node-metastasis (TNM) cancer staging system periodically. The most recent revision is the 7th edition, effective for cancers diagnosed on or after January 1, 2010. This editorial summarizes the background of the current revision and outlines the major issues revised. Most notable are the marked increase in the use of international datasets for more highly evidenced-based changes in staging, and the enhanced use of nonanatomic prognostic factors in defining the stage grouping. The future of cancer staging lies in the use of enhanced registry data standards to support personalization of cancer care through cancer outcome prediction models and nomograms.

Karl-Otto Bischoff (2007)
In this work a novel plan optimization platform is presented where treatment is delivered efficiently and accurately in a single dynamically modulated arc. Improvements in patient care achieved through image-guided positioning and plan adaptation have resulted in an increase in overall treatment times. Intensity-modulated radiation therapy (IMRT) has also increased treatment time by requiring a larger number of beam directions, increased monitor units (MU), and, in the case of tomotherapy, a slice-by-slice delivery. In order to maintain a similar level of patient throughput it will be necessary to increase the efficiency of treatment delivery. The solution proposed here is a novel aperture-based algorithm for treatment plan optimization where dose is delivered during a single gantry arc of up to 360 deg. The technique is similar to tomotherapy in that a full 360 deg of beam directions are available for optimization but is fundamentally different in that the entire dose volume is delivered in a single source rotation. The new technique is referred to as volumetric modulated arc therapy (VMAT). Multileaf collimator (MLC) leaf motion and number of MU per degree of gantry rotation is restricted during the optimization so that gantry rotation speed, leaf translation speed, and dose rate maxima do not excessively limit the delivery efficiency. During planning, investigators model continuous gantry motion by a coarse sampling of static gantry positions and fluence maps or MLC aperture shapes. The technique presented here is unique in that gantry and MLC position sampling is progressively increased throughout the optimization. Using the full gantry range will theoretically provide increased flexibility in generating highly conformal treatment plans. In practice, the additional flexibility is somewhat negated by the additional constraints placed on the amount of MLC leaf motion between gantry samples. A series of studies are performed that characterize the relationship between gantry and MLC sampling, dose modeling accuracy, and optimization time. Results show that gantry angle and MLC sample spacing as low as 1 deg and 0.5 cm, respectively, is desirable for accurate dose modeling. It is also shown that reducing the sample spacing dramatically reduces the ability of the optimization to arrive at a solution. The competing benefits of having small and large sample spacing are mutually realized using the progressive sampling technique described here. Preliminary results show that plans generated with VMAT optimization exhibit dose distributions equivalent or superior to static gantry IMRT. Timing studies have shown that the VMAT technique is well suited for on-line verification and adaptation with delivery times that are reduced to approximately 1.5-3 min for a 200 cGy fraction.

Pierre Bey,  Loïc Feuvret,  Jean-Jacques Mazeron … (2006)
We present a critical analysis of the conformity indices described in the literature and an evaluation of their field of application. Three-dimensional conformal radiotherapy, with or without intensity modulation, is based on medical imaging techniques, three-dimensional dosimetry software, compression accessories, and verification procedures. It consists of delineating target volumes and critical healthy tissues to select the best combination of beams. This approach allows better adaptation of the isodose to the tumor volume, while limiting irradiation of healthy tissues. Tools must be developed to evaluate the quality of proposed treatment plans. Dosimetry software provides the dose distribution in each CT section and dose-volume histograms without really indicating the degree of conformity. The conformity index is a complementary tool that attributes a score to a treatment plan or that can compare several treatment plans for the same patient. The future of conformal index in everyday practice therefore remains unclear.

* These authors contributed equally to this work.

This is an open access article distributed under the terms of the Creative Commons Attribution (CC BY-NC) license ( https://creativecommons.org/licenses/by-nc/4.0/). See http://ivyspring.com/terms for full terms and conditions.