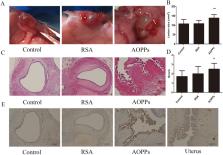 Publisher: The Company of Biologists Ltd

Advanced oxidation protein products (AOPPs) are a family of oxidized protein compounds and could induce oxidative stress and inflammatory lesion in various cells. The accumulation of AOPPs was associated with female reproductive diseases such as polycystic ovary syndrome (PCOS), leiomyoma and endometriosis. However, the relationship between AOPPs and endometrial cells is unclear. To explore the effects of accumulated AOPPs on endometrial cells, we treated normal rat endometrial epithelial cells (rEECs) and endometriosis model rats with AOPPs. Primary rEECs were collected from 8-week-old female Wistar rats. Increasing the amount of AOPPs in the media of rEECs enhanced rEEC proliferation and migration, and inhibited apoptosis. Moreover, AOPPs triggered the production of reactive oxygen species and nitrite along with activated ERK and P38 signal and this, in turn, led to an upregulation of proliferation and migration. With the treatment of antioxidants or the inhibitors of ERK and P38, the above effects of AOPPs on rEECs were attenuated. Additionally, in an endometriosis rat model, a similar phenomenon was observed in that the growth of endometriotic implants were promoted by AOPPs and EECs were significantly increased. This study indicated that the accumulation of AOPPs could promote rEEC proliferation and migration through ERK and P38 signal both in vivo and in vitro.

This article has an associated First Person interview with the first author of the paper .

Summary: The research indicated that the accumulation of AOPPs could promote rat endometrial epithelial cells proliferation and migration through ERK and P38 signaling pathways both in vivo and in vitro.

Evgeniy Eruslanov,  Sergei Kusmartsev (2009)
Cells constantly generate reactive oxygen species (ROS) during aerobic metabolism. The ROS generation plays an important protective and functional role in the immune system. The cell is armed with a powerful antioxidant defense system to combat excessive production of ROS. Oxidative stress occurs in cells when the generation of ROS overwhelms the cells' natural antioxidant defenses. ROS and the oxidative damage are thought to play an important role in many human diseases including cancer, atherosclerosis, other neurodegenerative diseases and diabetes. Thus, establishing their precise role requires the ability to measure ROS accurately and the oxidative damage that they cause. There are many methods for measuring free radical production in cells. The most straightforward techniques use cell permeable fluorescent and chemiluminescent probes. 2'-7'-Dichlorodihydrofluorescein diacetate (DCFH-DA) is one of the most widely used techniques for directly measuring the redox state of a cell. It has several advantages over other techniques developed. It is very easy to use, extremely sensitive to changes in the redox state of a cell, inexpensive and can be used to follow changes in ROS over time.

Toxicological and pharmacological concerns on oxidative stress and related diseases.

Soodabeh Saeidnia,  Mohammad Abdollahi (2013)
Although reactive oxygen species (ROS) such as superoxide, hydrogen peroxide and hydroxyl radical are generated as the natural byproduct of normal oxygen metabolism, they can create oxidative damage via interaction with bio-molecules. The role of oxidative stress as a remarkable upstream part is frequently reported in the signaling cascade of inflammation as well as chemo attractant production. Even though hydrogen peroxide can control cell signaling and stimulate cell proliferation at low levels, in higher concentrations it can initiate apoptosis and in very high levels may create necrosis. So far, the role of ROS in cellular damage and death is well documented with implicating in a broad range of degenerative alterations e.g. carcinogenesis, aging and other oxidative stress related diseases (OSRDs). Reversely, it is cleared that antioxidants are potentially able to suppress (at least in part) the immune system and to enhance the normal cellular protective responses to tissue damage. In this review, we aimed to provide insights on diverse OSRDs, which are correlated with the concept of oxidative stress as well as its cellular effects that can be inhibited by antioxidants. Resveratrol, angiotensin converting enzyme inhibitors, angiotensin receptor blockers, statins, nebivolol and carvedilol, pentaerythritol tetranitrate, mitochondria-targeted antioxidants, and plant-derived drugs (alone or combined) are the potential medicines that can be used to control OSRD. © 2013.

Charlotte Ngô,  Christiane Chéreau,  Carole Nicco … (2009)
Endometriosis is associated with chronic inflammation, and reactive oxygen species (ROS) are proinflammatory mediators that modulate cell proliferation. We have investigated whether the dysregulation of ROS production in endometriotic cells correlates with a pro-proliferative phenotype and can explain the spreading of this disease. Stromal and epithelial cells were purified from ovarian endometrioma and eutopic endometrium from 14 patients with endometriosis to produce four primary cell lines from each patient. ROS production, detoxification pathways, cell proliferation, and mitogen-activated protein kinase pathway activation were studied and compared with epithelial and stromal cell lines from 14 patients without endometriosis. Modulation of the proliferation of endometriosis by N-acetyl-cysteine, danazol, and mifepristone was tested in vitro and in 28 nude mice implanted with endometriotic tissue of human origin. Endometriotic cells displayed higher endogenous oxidative stress with an increase in ROS production, alterations in ROS detoxification pathways, and a drop in catalase levels, as observed for tumor cells. This increase in endogenous ROS correlated with increased cellular proliferation and activation of ERK1/2. These phenomena were abrogated by the antioxidant molecule N-acetyl-cysteine both in vitro and in a mouse model of endometriosis. Human endometriotic cells display activated pERK, enhanced ROS production, and proliferative capability. Our murine model shows that antioxidant molecules could be used as safe and efficient treatments for endometriosis.

This is an Open Access article distributed under the terms of the Creative Commons Attribution License ( https://creativecommons.org/licenses/by/4.0), which permits unrestricted use, distribution and reproduction in any medium provided that the original work is properly attributed.