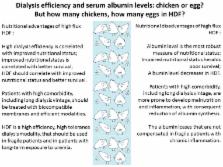 The history of dialysis and diet can be viewed as a series of battles waged against potential threats to patients’ lives. In the early years of dialysis, potassium was identified as “the killer”, and the lists patients were given of forbidden foods included most plant-derived nourishment. As soon as dialysis became more efficient and survival increased, hyperphosphatemia, was identified as the enemy, generating an even longer list of banned aliments. Conversely, the “third era” finds us combating protein-energy wasting. This review discusses four questions and four paradoxes, regarding the diet-dialysis dyad: are the “magic numbers” of nutritional requirements (calories: 30–35 kcal/kg; proteins > 1.2 g/kg) still valid? Are the guidelines based on the metabolic needs of patients on “conventional” thrice-weekly bicarbonate dialysis applicable to different dialysis schedules, including daily dialysis or haemodiafiltration? The quantity of phosphate and potassium contained in processed and preserved foods may be significantly different from those in untreated foods: what are we eating? Is malnutrition one condition or a combination of conditions? The paradoxes: obesity is associated with higher survival in dialysis, losing weight is associated with mortality, but high BMI is a contraindication for kidney transplantation; it is difficult to limit phosphate intake when a patient is on a high-protein diet, such as the ones usually prescribed on dialysis; low serum albumin is associated with low dialysis efficiency and reduced survival, but on haemodiafiltration, high efficiency is coupled with albumin losses; banning plant derived food may limit consumption of “vascular healthy” food in a vulnerable population. Tailored approaches and agreed practices are needed so that we can identify attainable goals and pursue them in our fragile haemodialysis populations.

A malnutrition-inflammation score is correlated with morbidity and mortality in maintenance hemodialysis patients.

Joel D. Kopple,  K. Kalantar-Zadeh,  H Humphreys … (2001)
Malnutrition inflammation complex syndrome (MICS) occurs commonly in maintenance hemodialysis (MHD) patients and may correlate with increased morbidity and mortality. An optimal, comprehensive, quantitative system that assesses MICS could be a useful measure of clinical status and may be a predictor of outcome in MHD patients. We therefore attempted to develop and validate such an instrument, comparing it with conventional measures of nutrition and inflammation, as well as prospective hospitalization and mortality. Using components of the conventional Subjective Global Assessment (SGA), a semiquantitative scale with three severity levels, the Dialysis Malnutrition Score (DMS), a fully quantitative scoring system consisting of 7 SGA components, with total score ranging between 7 (normal) and 35 (severely malnourished), was recently developed. To improve the DMS, we added three new elements to the 7 DMS components: body mass index, serum albumin level, and total iron-binding capacity to represent serum transferrin level. This new comprehensive Malnutrition-Inflammation Score (MIS) has 10 components, each with four levels of severity, from 0 (normal) to 3 (very severe). The sum of all 10 MIS components ranges from 0 to 30, denoting increasing degree of severity. These scores were compared with anthropometric measurements, near-infrared-measured body fat percentage, laboratory measures that included serum C-reactive protein (CRP), and 12-month prospective hospitalization and mortality rates. Eighty-three outpatients (44 men, 39 women; age, 59 +/- 15 years) on MHD therapy for at least 3 months (43 +/- 33 months) were evaluated at the beginning of this study and followed up for 1 year. The SGA, DMS, and MIS were assessed simultaneously on all patients by a trained physician. Case-mix-adjusted correlation coefficients for the MIS were significant for hospitalization days (r = 0.45; P < 0.001) and frequency of hospitalization (r = 0.46; P < 0.001). Compared with the SGA and DMS, most pertinent correlation coefficients were stronger with the MIS. The MIS, but not the SGA or DMS, correlated significantly with creatinine level, hematocrit, and CRP level. During the 12-month follow-up, 9 patients died and 6 patients left the cohort. The Cox proportional hazard-calculated relative risk for death for each 10-unit increase in the MIS was 10.43 (95% confidence interval, 2.28 to 47.64; P = 0.002). The MIS was superior to its components or different subversions for predicting mortality. The MIS appears to be a comprehensive scoring system with significant associations with prospective hospitalization and mortality, as well as measures of nutrition, inflammation, and anemia in MHD patients. The MIS may be superior to the conventional SGA and the DMS, as well as to individual laboratory values, as a predictor of dialysis outcome and an indicator of MICS.