Maximizing kidneys for transplantation using machine perfusion: from the past to the future : A comprehensive systematic review and meta-analysis 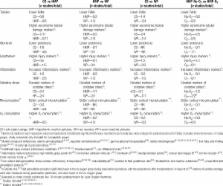 The two main options for renal allograft preservation are static cold storage (CS) and machine perfusion (MP). There has been considerably increased interest in MP preservation of kidneys, however conflicting evidence regarding its efficacy and associated costs have impacted its scale of clinical uptake. Additionally, there is no clear consensus regarding oxygenation, and hypo- or normothermia, in conjunction with MP, and its mechanisms of action are also debated. The primary aims of this article were to elucidate the benefits of MP preservation with and without oxygenation, and/or under normothermic conditions, when compared with CS prior to deceased donor kidney transplantation.

HMP improves short-term outcomes after renal transplantation, with a less clear effect in the longer-term. There is considerable room for modification of the process to assess whether superior outcomes can be achieved through oxygenation, perfusion fluid manipulation, and alteration of perfusion temperature. In particular, correlative experimental (animal) data provides strong support for more clinical trials investigating normothermic MP.

M L Nicholson,  S A Hosgood (2013)
Ex vivo normothermic perfusion (EVNP) is a novel method of preservation that restores circulation and allows an organ to regain function prior to transplantation. The aim of this study was to assess the effects of EVNP in kidneys from marginal donors. Eighteen kidneys from extended criteria donors (ECD) underwent a period of EVNP immediately before transplantation. Kidneys were perfused with a plasma free red-cell based solution at a mean temperature of 34.6°C. The outcome of these kidneys was compared to a control group of 47 ECD kidneys that underwent static cold storage (CS). The mean donor age was 61 ± 1 years in the EVNP and 62 ± 6 years in the CS group (p = 0.520). EVNP kidneys were perfused for an average of 63 ± 16 min and all were transplanted successfully. The delayed graft function rate (DGF), defined as the requirement for dialysis within the first 7 days was 1/18 patients (5.6%) in the EVNP group versus 17/47 (36.2%) in the CS group (p = 0.014). There was no difference in graft or patient survival at 12 months (p = 0.510, 1.000). This first series of EVNP in renal transplantation demonstrates that this technique is both feasible and safe. Our preliminary data suggests that EVNP offers promise as a new technique of kidney preservation.