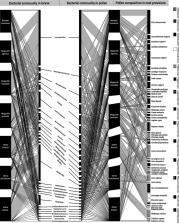 Solitary bees build their nests by modifying the interior of natural cavities, and they provision them with food by importing collected pollen. As a result, the microbiota of the solitary bee nests may be highly dependent on introduced materials. In order to investigate how the collected pollen is associated with the nest microbiota, we used metabarcoding of the ITS2 rDNA and the 16S rDNA to simultaneously characterize the pollen composition and the bacterial communities of 100 solitary bee nest chambers belonging to seven megachilid species. We found a weak correlation between bacterial and pollen alpha diversity and significant associations between the composition of pollen and that of the nest microbiota, contributing to the understanding of the link between foraging and bacteria acquisition for solitary bees. Since solitary bees cannot establish bacterial transmission routes through eusociality, this link could be essential for obtaining bacterial symbionts for this group of valuable pollinators.

We investigated the importance of imported pollen for the solitary bee nest microbiomes, as its inclusion introduces a wide diversity of environmental and primarily floral bacteria. The simultaneous investigation of pollen composition and nest microbiota showed that both bacterial diversity and composition can be influenced by the foraging preferences of each bee species. Also, we were able to suggest associations with specific bacterial taxa as possibly secured through plant visitation. The present study contributes to the understanding of the complex relationships in the plant–pollinator–microbe triangle.

Nancy Moran,  Allison Hansen,  J. Elijah Powell … (2012)
Surveys of 16S rDNA sequences from the honey bee, Apis mellifera, have revealed the presence of eight distinctive bacterial phylotypes in intestinal tracts of adult worker bees. Because previous studies have been limited to relatively few sequences from samples pooled from multiple hosts, the extent of variation in this microbiota among individuals within and between colonies and locations has been unclear. We surveyed the gut microbiota of 40 individual workers from two sites, Arizona and Maryland USA, sampling four colonies per site. Universal primers were used to amplify regions of 16S ribosomal RNA genes, and amplicons were sequenced using 454 pyrotag methods, enabling analysis of about 330,000 bacterial reads. Over 99% of these sequences belonged to clusters for which the first blastn hits in GenBank were members of the known bee phylotypes. Four phylotypes, one within Gammaproteobacteria (corresponding to “Candidatus Gilliamella apicola”) one within Betaproteobacteria (“Candidatus Snodgrassella alvi”), and two within Lactobacillus, were present in every bee, though their frequencies varied. The same typical bacterial phylotypes were present in all colonies and at both sites. Community profiles differed significantly among colonies and between sites, mostly due to the presence in some Arizona colonies of two species of Enterobacteriaceae not retrieved previously from bees. Analysis of Sanger sequences of rRNA of the Snodgrassella and Gilliamella phylotypes revealed that single bees contain numerous distinct strains of each phylotype. Strains showed some differentiation between localities, especially for the Snodgrassella phylotype.

Alejandra Vásquez,  Eva Forsgren,  Ingemar Fries … (2012)
Lactic acid bacteria (LAB) are well recognized beneficial host-associated members of the microbiota of humans and animals. Yet LAB-associations of invertebrates have been poorly characterized and their functions remain obscure. Here we show that honeybees possess an abundant, diverse and ancient LAB microbiota in their honey crop with beneficial effects for bee health, defending them against microbial threats. Our studies of LAB in all extant honeybee species plus related apid bees reveal one of the largest collections of novel species from the genera Lactobacillus and Bifidobacterium ever discovered within a single insect and suggest a long (>80 mya) history of association. Bee associated microbiotas highlight Lactobacillus kunkeei as the dominant LAB member. Those showing potent antimicrobial properties are acquired by callow honey bee workers from nestmates and maintained within the crop in biofilms, though beekeeping management practices can negatively impact this microbiota. Prophylactic practices that enhance LAB, or supplementary feeding of LAB, may serve in integrated approaches to sustainable pollinator service provision. We anticipate this microbiota will become central to studies on honeybee health, including colony collapse disorder, and act as an exemplar case of insect-microbe symbiosis.