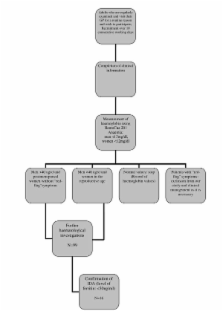 All patients attending the rural primary health care units of twelve general practitioners (GPs) on the island of Crete for ten consecutive working days were eligible to participate in this study. Hemoglobin (Hb) levels were measured by portable analyzers. Laboratory tests to confirm new cases of anaemia were performed at the University General Hospital of Heraklion.

One hundred and thirteen out of 541 recruited patients had a low value of Hb according to the initial measurement obtained by the use of the portable analyzer. Forty five (45.5%) of the 99 subjects who underwent laboratory testing had confirmed anaemia. The mean value of the Hb levels in the group with confirmed anaemia, as detected by the portable analyzer was 11.1 g/dl (95% Confidence Interval (CI) from 10.9 to 11.4) and the respective mean value of the Hb levels obtained from the full blood count was 11.4 g/dl (95% CI from 11.2 to 11.7) ( P = 0.01). Sixteen out of those 45 patients with anaemia (35.6%) had IDA, with ferritin levels lower than 30 ng/ml.

Keeping in mind that this paper does not deal with specificity or sensitivity figures, it is suggested that in rural and remote settings anaemia is still invisible and point of care testing may have a place to identify it.

Prevalence of anemia in persons 65 years and older in the United States: evidence for a high rate of unexplained anemia.

Luigi Ferrucci,  Ryan Woodman,  R Eisenstaedt … (2004)
Clinicians frequently identify anemia in their older patients, but national data on the prevalence and causes of anemia in this population in the United States have been unavailable. Data presented here are from the noninstitutionalized US population assessed in the third National Health and Nutrition Examination Survey (1988-1994). Anemia was defined by World Health Organization criteria; causes of anemia included iron, folate, and B(12) deficiencies, renal insufficiency, anemia of chronic inflammation (ACI), formerly termed anemia of chronic disease, and unexplained anemia (UA). ACI by definition required normal iron stores with low circulating iron (less than 60 microg/dL). After age 50 years, anemia prevalence rates rose rapidly, to a rate greater than 20% at age 85 and older. Overall, 11.0% of men and 10.2% of women 65 years and older were anemic. Of older persons with anemia, evidence of nutrient deficiency was present in one third, ACI or chronic renal disease or both was present in one third, and UA was present in one third. Most occurrences of anemia were mild; 2.8% of women and 1.6% of men had hemoglobin levels lower than 110 g/L (11 g/dL). Therefore, anemia is common, albeit not severe, in the older population, and a substantial proportion of anemia is of indeterminate cause. The impact of anemia on quality of life, recovery from illness, and functional abilities must be further investigated in older persons.

Evaluation of the gastrointestinal tract in patients with iron-deficiency anemia.

Prospective evaluation of gastrointestinal tract in patients with iron-deficiency anemia.