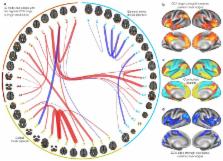 We investigated the relationship between individual subjects’ functional connectomes and 280 behavioral and demographic measures, in a single holistic multivariate analysis relating imaging to non-imaging data from 461 subjects in the Human Connectome Project. We identified one strong mode of population co-variation; subjects were predominantly spread along a single “positive-negative” axis, linking lifestyle, demographic and psychometric measures to each other and to a specific pattern of brain connectivity.

The future of memory: remembering, imagining, and the brain.

Daniel L. Schacter,  Donna Rose Addis,  Demis Hassabis … (2012)
During the past few years, there has been a dramatic increase in research examining the role of memory in imagination and future thinking. This work has revealed striking similarities between remembering the past and imagining or simulating the future, including the finding that a common brain network underlies both memory and imagination. Here, we discuss a number of key points that have emerged during recent years, focusing in particular on the importance of distinguishing between temporal and nontemporal factors in analyses of memory and imagination, the nature of differences between remembering the past and imagining the future, the identification of component processes that comprise the default network supporting memory-based simulations, and the finding that this network can couple flexibly with other networks to support complex goal-directed simulations. This growing area of research has broadened our conception of memory by highlighting the many ways in which memory supports adaptive functioning. Copyright © 2012 Elsevier Inc. All rights reserved.

Grega Repovs,  Steve Cole,  Tal Yarkoni … (2012)
Control of thought and behavior is fundamental to human intelligence. Evidence suggests a frontoparietal brain network implements such cognitive control across diverse contexts. We identify a mechanism--global connectivity--by which components of this network might coordinate control of other networks. A lateral prefrontal cortex (LPFC) region's activity was found to predict performance in a high control demand working memory task and also to exhibit high global connectivity. Critically, global connectivity in this LPFC region, involving connections both within and outside the frontoparietal network, showed a highly selective relationship with individual differences in fluid intelligence. These findings suggest LPFC is a global hub with a brainwide influence that facilitates the ability to implement control processes central to human intelligence.

Evidence for grid cells in a human memory network.

Christian F Doeller,  Neil D. Burgess,  Caswell Barry (2010)
Grid cells in the entorhinal cortex of freely moving rats provide a strikingly periodic representation of self-location which is indicative of very specific computational mechanisms. However, the existence of grid cells in humans and their distribution throughout the brain are unknown. Here we show that the preferred firing directions of directionally modulated grid cells in rat entorhinal cortex are aligned with the grids, and that the spatial organization of grid-cell firing is more strongly apparent at faster than slower running speeds. Because the grids are also aligned with each other, we predicted a macroscopic signal visible to functional magnetic resonance imaging (fMRI) in humans. We then looked for this signal as participants explored a virtual reality environment, mimicking the rats' foraging task: fMRI activation and adaptation showing a speed-modulated six-fold rotational symmetry in running direction. The signal was found in a network of entorhinal/subicular, posterior and medial parietal, lateral temporal and medial prefrontal areas. The effect was strongest in right entorhinal cortex, and the coherence of the directional signal across entorhinal cortex correlated with spatial memory performance. Our study illustrates the potential power of combining single-unit electrophysiology with fMRI in systems neuroscience. Our results provide evidence for grid-cell-like representations in humans, and implicate a specific type of neural representation in a network of regions which supports spatial cognition and also autobiographical memory.

Correspondence should be addressed to SS ( steve@ 123456fmrib.ox.ac.uk )

DVE, KU, DB, TB, MG and SS contributed to the data acquisition and image processing. SS, KM, TN, DV, AW and TB designed and carried out the statistical analyses. All authors contributed to writing the paper.