The oldest Archaeopteryx (Theropoda: Avialiae): a new specimen from the Kimmeridgian/Tithonian boundary of Schamhaupten, Bavaria 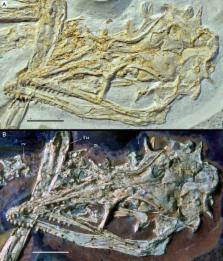 The iconic primeval bird Archaeopteryx was so far mainly known from the Altmühltal Formation (early Tithonian) of Bavaria, southern Germany, with one specimen having been found in the overlying Mörnsheim Formation. A new specimen (the 12th skeletal specimen) from the earliest Tithonian Painten Formation of Schamhaupten (Bavaria) represents the so far oldest representative of the genus. The new specimen shows several interesting anatomical details, including the presence of a postorbital in contact with the jugal, the presence of a separate prefrontal and coronoid, and opisthocoelous mid-cervical vertebrae. Based on observations on the new specimen, we discuss several problematic issues concerning Archaeopteryx, including the monophyly and diagnosis of the genus, the absence/presence of the sternum, the position of the gastralia, and variation in morphometrics and dental morphology in that genus. Based on a new diagnosis for the genus Archaeopteryx, the Berlin, Eichstätt, Solnhofen, Munich, Daiting, Thermopolis, 11th, and 12th specimens can be referred to this genus with high certainty. The Maxberg specimen is very probably also an Archaeopteryx, based on overall similarity, although none of the diagnostic characters can be evaluated with certainty. The ninth specimen (‘chicken wing’) might be Archaeopteryx, but cannot be referred to the genus with any certainty. In comparison with other paravians, the presence of distally thickened anterior pectoral ribs indicates that a rather large cartilagenous sternum was present in this taxon. In contrast to non-opisthopubic theropods, opisthopubic taxa, such as Archaeopteryx and many other paravians, have the posterior end of the gastral basket preserved at about half-length of the pubis, which might reflect the post-mortem collapse of enlarged abdominal air sacs in these taxa. Specimens that can be referred to Archaeopteryx show a high amount of variation, both in the morphometrics of the limb bones as well as in the dentition. In respect to the latter aspect, variation is found in tooth number, spacing, orientation, and morphology, with no two specimens showing the exact same pattern. The significance of this variation is unclear, and possible explanations reach from high intraspecific (and possibly ontogenetic and/or sexual dimorphic) variation to the possibility that the known specimens represent a ‘species flock’ of Archaeopteryx, possibly due to island speciation after the initial dispersal of the genus into the Solnhofen Archipelago.

The calmodulin pathway and evolution of elongated beak morphology in Darwin's finches.

P. Grant,  Christine Hartmann,  Kevin Kuo … (2006)
A classic textbook example of adaptive radiation under natural selection is the evolution of 14 closely related species of Darwin's finches (Fringillidae, Passeriformes), whose primary diversity lies in the size and shape of their beaks. Thus, ground finches have deep and wide beaks, cactus finches have long and pointed beaks (low depth and narrower width), and warbler finches have slender and pointed beaks, reflecting differences in their respective diets. Previous work has shown that even small differences in any of the three major dimensions (depth, width and length) of the beak have major consequences for the overall fitness of the birds. Recently we used a candidate gene approach to explain one pathway involved in Darwin's finch beak morphogenesis. However, this type of analysis is limited to molecules with a known association with craniofacial and/or skeletogenic development. Here we use a less constrained, complementary DNA microarray analysis of the transcripts expressed in the beak primordia to find previously unknown genes and pathways whose expression correlates with specific beak morphologies. We show that calmodulin (CaM), a molecule involved in mediating Ca2+ signalling, is expressed at higher levels in the long and pointed beaks of cactus finches than in more robust beak types of other species. We validated this observation with in situ hybridizations. When this upregulation of the CaM-dependent pathway is artificially replicated in the chick frontonasal prominence, it causes an elongation of the upper beak, recapitulating the beak morphology of the cactus finches. Our results indicate that local upregulation of the CaM-dependent pathway is likely to have been a component of the evolution of Darwin's finch species with elongated beak morphology and provide a mechanistic explanation for the independence of beak evolution along different axes. More generally, our results implicate the CaM-dependent pathway in the developmental regulation of craniofacial skeletal structures.

A pre-Archaeopteryx troodontid theropod from China with long feathers on the metatarsus.

Lijun Zhang,  Bob Hou,  Xing Xu … (2009)
The early evolution of the major groups of derived non-avialan theropods is still not well understood, mainly because of their poor fossil record in the Jurassic. A well-known result of this problem is the 'temporal paradox' argument that is sometimes made against the theropod hypothesis of avian origins. Here we report on an exceptionally well-preserved small theropod specimen collected from the earliest Late Jurassic Tiaojishan Formation of western Liaoning, China. The specimen is referable to the Troodontidae, which are among the theropods most closely related to birds. This new find refutes the 'temporal paradox'1 and provides significant information on the temporal framework of theropod divergence. Furthermore, the extensive feathering of this specimen, particularly the attachment of long pennaceous feathers to the pes, sheds new light on the early evolution of feathers and demonstrates the complex distribution of skeletal and integumentary features close to the dinosaur-bird transition.

The theropod ancestry of birds: new evidence from the late cretaceous of madagascar

Giacomo Chiappe,  Matthew Krause,  SL Sampson … (1998)
A partial skeleton of a primitive bird, Rahona ostromi, gen. et sp. nov., has been discovered from the Late Cretaceous of Madagascar. This specimen, although exhibiting avian features such as a reversed hallux and ulnar papillae, retains characteristics that indicate a theropod ancestry, including a pubic foot and hyposphene-hypantra vertebral articulations. Rahona has a robust, hyperextendible second digit on the hind foot that terminates in a sicklelike claw, a unique characteristic of the theropod groups Troodontidae and Dromaeosauridae. A phylogenetic analysis places Rahona with Archaeopteryx, making Rahona one of the most primitive birds yet discovered.