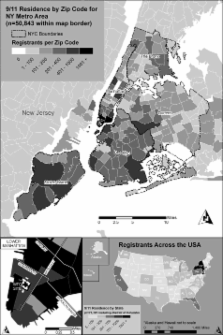 Journal: Journal of Urban Health : Bulletin of the New York Academy of Medicine

To date, health effects of exposure to the September 11, 2001 disaster in New York City have been studied in specific groups, but no studies have estimated its impact across the different exposed populations. This report provides an overview of the World Trade Center Health Registry (WTCHR) enrollees, their exposures, and their respiratory and mental health outcomes 2–3 years post-9/11. Results are extrapolated to the estimated universe of people eligible to enroll in the WTCHR to determine magnitude of impact. Building occupants, persons on the street or in transit in lower Manhattan on 9/11, local residents, rescue and recovery workers/volunteers, and area school children and staff were interviewed and enrolled in the WTCHR between September 2003 and November 2004. A total of 71,437 people enrolled in the WTCHR, for 17.4% coverage of the estimated eligible exposed population (nearly 410,000); 30% were recruited from lists, and 70% were self-identified. Many reported being in the dust cloud from the collapsing WTC Towers (51%), witnessing traumatic events (70%), or sustaining an injury (13%). After 9/11, 67% of adult enrollees reported new or worsening respiratory symptoms, 3% reported newly diagnosed asthma, 16% screened positive for probable posttraumatic stress disorder (PTSD), and 8% for serious psychological distress (SPD). Newly diagnosed asthma was most common among rescue and recovery workers who worked on the debris pile (4.1%). PTSD was higher among those who reported Hispanic ethnicity (30%), household income <$25,000 (31%), or being injured (35%). Using previously published estimates of the total number of exposed people per WTCHR eligibility criteria, we estimate between 3,800 and 12,600 adults experienced newly diagnosed asthma and 34,600–70,200 adults experienced PTSD following the attacks, suggesting extensive adverse health impacts beyond the immediate deaths and injuries from the acute event.

Maaike E. Walters,  Lisa Colpe,  E Hiripi … (2002)
A 10-question screening scale of psychological distress and a six-question short-form scale embedded within the 10-question scale were developed for the redesigned US National Health Interview Survey (NHIS). Initial pilot questions were administered in a US national mail survey (N = 1401). A reduced set of questions was subsequently administered in a US national telephone survey (N = 1574). The 10-question and six-question scales, which we refer to as the K10 and K6, were constructed from the reduced set of questions based on Item Response Theory models. The scales were subsequently validated in a two-stage clinical reappraisal survey (N = 1000 telephone screening interviews in the first stage followed by N = 153 face-to-face clinical interviews in the second stage that oversampled first-stage respondents who screened positive for emotional problems) in a local convenience sample. The second-stage sample was administered the screening scales along with the Structured Clinical Interview for DSM-IV (SCID). The K6 was subsequently included in the 1997 (N = 36116) and 1998 (N = 32440) US National Health Interview Survey, while the K10 was included in the 1997 (N = 10641) Australian National Survey of Mental Health and Well-Being. Both the K10 and K6 have good precision in the 90th-99th percentile range of the population distribution (standard errors of standardized scores in the range 0.20-0.25) as well as consistent psychometric properties across major sociodemographic subsamples. The scales strongly discriminate between community cases and non-cases of DSM-IV/SCID disorders, with areas under the Receiver Operating Characteristic (ROC) curve of 0.87-0.88 for disorders having Global Assessment of Functioning (GAF) scores of 0-70 and 0.95-0.96 for disorders having GAF scores of 0-50. The brevity, strong psychometric properties, and ability to discriminate DSM-IV cases from non-cases make the K10 and K6 attractive for use in general-purpose health surveys. The scales are already being used in annual government health surveys in the US and Canada as well as in the WHO World Mental Health Surveys. Routine inclusion of either the K10 or K6 in clinical studies would create an important, and heretofore missing, crosswalk between community and clinical epidemiology.

Ronald C Kessler (1995)
Data were obtained on the general population epidemiology of DSM-III-R posttraumatic stress disorder (PTSD), including information on estimated life-time prevalence, the kinds of traumas most often associated with PTSD, sociodemographic correlates, the comorbidity of PTSD with other lifetime psychiatric disorders, and the duration of an index episode. Modified versions of the DSM-III-R PTSD module from the Diagnostic Interview Schedule and of the Composite International Diagnostic Interview were administered to a representative national sample of 5877 persons aged 15 to 54 years in the part II subsample of the National Comorbidity Survey. The estimated lifetime prevalence of PTSD is 7.8%. Prevalence is elevated among women and the previously married. The traumas most commonly associated with PTSD are combat exposure and witnessing among men and rape and sexual molestation among women. Posttraumatic stress disorder is strongly comorbid with other lifetime DSM-III-R disorders. Survival analysis shows that more than one third of people with an index episode of PTSD fail to recover even after many years. Posttraumatic stress disorder is more prevalent than previously believed, and is often persistent. Progress in estimating age-at-onset distributions, cohort effects, and the conditional probabilities of PTSD from different types of trauma will require future epidemiologic studies to assess PTSD for all lifetime traumas rather than for only a small number of retrospectively reported "most serious" traumas.