Will the NHS continue to function in an influenza pandemic? a survey of healthcare workers in the West Midlands, UK 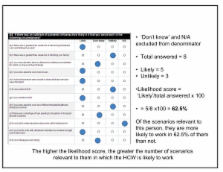 If UK healthcare services are to respond effectively to pandemic influenza, levels of absenteeism amongst healthcare workers (HCWs) must be minimised. Current estimates of the likelihood that HCWs will continue to attend work during a pandemic are subject to scientific and predictive uncertainty, yet an informed evidence base is needed if contingency plans addressing the issues of HCW absenteeism are to be prepared.

This paper reports the findings of a self-completed survey of randomly selected HCWs across three purposively sampled healthcare trusts in the West Midlands. The survey aimed to identify the factors positively or negatively associated with willingness to work during an influenza pandemic, and to evaluate the acceptability of potential interventions or changes to working practice to promote the continued presence at work of those otherwise unwilling or unable to attend. 'Likelihood' and 'persuadability' scores were calculated for each respondent according to indications of whether or not they were likely to work under different circumstances. Binary logistic regression was used to compute bivariate and multivariate odds ratios to evaluate the association of demographic variables and other respondent characteristics with the self-described likelihood of reporting to work.

Levels of absenteeism amongst HCWs may be considerably higher than official estimates, with potential absence concentrated amongst certain groups of employees. Although interventions designed to minimise absenteeism should target HCWs with a low stated likelihood of working, members of these groups may also be the least receptive to such interventions. Changes to working conditions which reduce barriers to the ability to work may not address barriers linked to willingness to work, and may fail to overcome HCWs' reluctance to work in the face of what may still be deemed unacceptable risk to self and/or family.

Health care workers' ability and willingness to report to duty during catastrophic disasters.

Nadia Qureshi,  Diane Morse,  T Straub … (2005)
Catastrophic disasters create surge capacity needs for health care systems. This is especially true in the urban setting because the high population density and reliance on complex urban infrastructures (e.g., mass transit systems and high rise buildings) could adversely affect the ability to meet surge capacity needs. To better understand responsiveness in this setting, we conducted a survey of health care workers (HCWs) (N =6,428) from 47 health care facilities in New York City and the surrounding metropolitan region to determine their ability and willingness to report to work during various catastrophic events. A range of facility types and sizes were represented in the sample. Results indicate that HCWs were most able to report to work for a mass casualty incident (MCI) (83%), environmental disaster (81%), and chemical event (71%) and least able to report during a smallpox epidemic (69%), radiological event (64%), sudden acute respiratory distress syndrome (SARS) outbreak (64%), or severe snow storm (49%). In terms of willingness, HCWs were most willing to report during a snow storm (80%), MCI (86%), and environmental disaster (84%) and least willing during a SARS outbreak (48%), radiological event (57%), smallpox epidemic (61%), and chemical event (68%). Barriers to ability included transportation problems, child care, eldercare, and pet care obligations. Barriers to willingness included fear and concern for family and self and personal health problems. The findings were consistent for all types of facilities. Importantly, many of the barriers identified are amenable to interventions.

Ran Balicer,  Saad B Omer,  Daniel J Barnett … (2006)
Background Current national preparedness plans require local health departments to play an integral role in responding to an influenza pandemic, a major public health threat that the World Health Organization has described as "inevitable and possibly imminent". To understand local public health workers' perceptions toward pandemic influenza response, we surveyed 308 employees at three health departments in Maryland from March – July 2005, on factors that may influence their ability and willingness to report to duty in such an event. Results The data suggest that nearly half of the local health department workers are likely not to report to duty during a pandemic. The stated likelihood of reporting to duty was significantly greater for clinical (Multivariate OR: 2.5; CI 1.3–4.7) than technical and support staff, and perception of the importance of one's role in the agency's overall response was the single most influential factor associated with willingness to report (Multivariate OR: 9.5; CI 4.6–19.9). Conclusion The perceived risk among public health workers was shown to be associated with several factors peripheral to the actual hazard of this event. These risk perception modifiers and the knowledge gaps identified serve as barriers to pandemic influenza response and must be specifically addressed to enable effective local public health response to this significant threat.

Boris P Ehrenstein,  Frank Hanses,  Bernd Salzberger (2006)
Background Conflicts between professional duties and fear of influenza transmission to family members may arise among health care professionals (HCP). Methods We surveyed employees at our university hospital regarding ethical issues arising during the management of an influenza pandemic. Results Of 644 respondents, 182 (28%) agreed that it would be professionally acceptable for HCP to abandon their workplace during a pandemic in order to protect themselves and their families, 337 (52%) disagreed with this statement and 125 (19%) had no opinion, with a higher rate of disagreement among physicians (65%) and nurses (54%) compared with administrators (32%). Of all respondents, 375 (58%) did not believe that the decision to report to work during a pandemic should be left to the individual HCP and 496 (77%) disagreed with the statement that HCP should be permanently dismissed for not reporting to work during a pandemic. Only 136 (21%) respondents agreed that HCW without children should primarily care for the influenza patients. Conclusion Our results suggest that a modest majority of HCP, but only a minority of hospital administrators, recognises the obligation to treat patients despite the potential risks. Professional ethical guidelines allowing for balancing the needs of society with personal risks are needed to help HCP fulfil their duties in the case of a pandemic influenza.