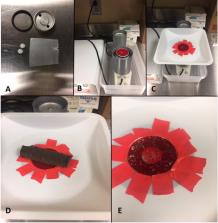 Human body lice ( Pediculus humanus) are neglected ectoparasites and pathogen vectors. Difficulties in raising and maintaining colonies of body lice in a laboratory setting remain a barrier to fundamental studies of physiology and vector-pathogen interactions in these insects. Several in vivo and in vitro rearing systems have been previously described and used by multiple research groups. However, these methods suffer from drawbacks that still complicate the rearing of body lice relative to many other commonly studied hematophagous insects. Here, a simplified protocol for raising and maintaining body lice in vitro using the commercially available Hemotek apparatus is described. This protocol draws from published methods for rearing body lice as well as other hematophagous insect species to further reduce labor, time, costs, and regulatory requirements typically associated with keeping human body lice in the laboratory. Using this protocol, the insects consistently fed on commercially available rabbit blood with little mortality, reached adulthood at a high rate, and produced a significant number of viable eggs, resulting in a 4.8-fold increase in population over a period of 40 days. The data suggest that the process described here can propagate modest populations for ongoing laboratory experiments and is a useful alternative to existing methods. The use and further optimization of in vitro rearing systems may facilitate dynamic studies of body lice by a wider range of investigators, enabling new progress in combating lice infestations, and louse-borne infections.

Pierre-Edouard Fournier,  Jean Bosco Ndihokubwayo,  Jo Guidran … (2002)
Using polymerase chain reaction and sequencing, we investigated the prevalence of Rickettsia prowazekii, Bartonella quintana, and Borrelia recurrentis in 841 body lice collected from various countries. We detected R. prowazekii in body lice from Burundi in 1997 and in lice from Burundi and Rwanda in 2001; B. quintana infections of body lice were widespread. We did not detect B. recurrentis in any lice.

Experimental model to evaluate the human body louse as a vector of plague.

Didier Raoult,  Hubert Lepidi,  Michel Drancourt … (2006)
Yersinia pestis has been found in human body lice during plague outbreaks. To evaluate the role that the human body louse plays as a vector of plague, we allowed lice to feed on rabbits made bacteremic by intravenous inoculation of 10(9) colony-forming units of 3 strains of Y. pestis. High mortality rates were observed in all lice 2 and 3 days after infection. The lice remained infected with the strains for their life span and excreted viable organisms in their feces from day 1, although they were unable to lay eggs. The lice infected with 2 virulent strains of Y. pestis transmitted the organisms during feeding to uninfected rabbits, which became septicemic and died of plague (with 1 exception) 1 day later. Infections were transmitted to naive lice that were fed on these rabbits, showing that lice can be vectors of Y. pestis in an experimental model.

The origin and distribution of human lice in the world.

Amina Boutellis,  Laurent Abi-Rached,  Didier Raoult (2014)
Two genera of lice parasitize humans: Pthirus and Pediculus. The latter is of significant public health importance and comprises two ecotypes: the body louse and the head louse. These ecotypes are morphologically and genetically notably similar; the body louse is responsible for three infectious diseases: Louse-borne epidemic typhus, relapsing fever, and trench fever. Mitochondrial DNA studies have shown that there are three obviously divergent clades of head lice (A, B and C), and only one clade of body lice is shared with head lice (clade A). Each clade has a unique geographic distribution. Lice have been parasitizing humans for millions of years and likely dispersed throughout the World with the human migrations out of Africa, so they can be good markers for studying human evolution. Here, we present an overview of the origin of human lice and their role in vector pathogenic bacteria that caused epidemics, and we review the association between lice clades and human migrations.