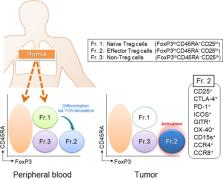 Regulatory T (Treg) cells suppress abnormal/excessive immune responses to self‐ and nonself‐antigens to maintain immune homeostasis. In tumor immunity, Treg cells are involved in tumor development and progression by inhibiting antitumor immunity. There are several Treg cell immune suppressive mechanisms: inhibition of costimulatory signals by CD80 and CD86 expressed by dendritic cells through cytotoxic T‐lymphocyte antigen‐4, interleukin (IL)‐2 consumption by high‐affinity IL‐2 receptors with high CD25 (IL‐2 receptor α‐chain) expression, secretion of inhibitory cytokines, metabolic modulation of tryptophan and adenosine, and direct killing of effector T cells. Infiltration of Treg cells into the tumor microenvironment (TME) occurs in multiple murine and human tumors. Regulatory T cells are chemoattracted to the TME by chemokine gradients such as CCR4‐CCL17/22, CCR8‐CCL1, CCR10‐CCL28, and CXCR3‐CCL9/10/11. Regulatory T cells are then activated and inhibit antitumor immune responses. A high infiltration by Treg cells is associated with poor survival in various types of cancer. Therefore, strategies to deplete Treg cells and control of Treg cell functions to increase antitumor immune responses are urgently required in the cancer immunotherapy field. Various molecules that are highly expressed by Treg cells, such as immune checkpoint molecules, chemokine receptors, and metabolites, have been targeted by Abs or small molecules, but additional strategies are needed to fine‐tune and optimize for augmenting antitumor effects restricted in the TME while avoiding systemic autoimmunity. Here, we provide a brief synopsis of these cells in cancer and how they can be controlled to achieve therapeutic outcomes.

Involvement of PD-L1 on tumor cells in the escape from host immune system and tumor immunotherapy by PD-L1 blockade.

Y Iwai,  M. Ishida,  Y. Tanaka … (2002)
PD-1 is a receptor of the Ig superfamily that negatively regulates T cell antigen receptor signaling by interacting with the specific ligands (PD-L) and is suggested to play a role in the maintenance of self-tolerance. In the present study, we examined possible roles of the PD-1/PD-L system in tumor immunity. Transgenic expression of PD-L1, one of the PD-L, in P815 tumor cells rendered them less susceptible to the specific T cell antigen receptor-mediated lysis by cytotoxic T cells in vitro, and markedly enhanced their tumorigenesis and invasiveness in vivo in the syngeneic hosts as compared with the parental tumor cells that lacked endogenous PD-L. Both effects could be reversed by anti-PD-L1 Ab. Survey of murine tumor lines revealed that all of the myeloma cell lines examined naturally expressed PD-L1. Growth of the myeloma cells in normal syngeneic mice was inhibited significantly albeit transiently by the administration of anti-PD-L1 Ab in vivo and was suppressed completely in the syngeneic PD-1-deficient mice. These results suggest that the expression of PD-L1 can serve as a potent mechanism for potentially immunogenic tumors to escape from host immune responses and that blockade of interaction between PD-1 and PD-L may provide a promising strategy for specific tumor immunotherapy.

David Munn,  L Mellor (2004)
Indoleamine 2,3-dioxygenase (IDO) is an enzyme that degrades the essential amino acid tryptophan. The concept that cells expressing IDO can suppress T-cell responses and promote tolerance is a relatively new paradigm in immunology. Considerable evidence now supports this hypothesis, including studies of mammalian pregnancy, tumour resistance, chronic infections and autoimmune diseases. In this review, we summarize key recent developments and propose a unifying model for the role of IDO in tolerance induction.

Chay Kuo,  Mark W. Collison,  David Sehy … (2007)
Regulatory T (T(reg)) cells are a critical sub-population of CD4+ T cells that are essential for maintaining self tolerance and preventing autoimmunity, for limiting chronic inflammatory diseases, such as asthma and inflammatory bowel disease, and for regulating homeostatic lymphocyte expansion. However, they also suppress natural immune responses to parasites and viruses as well as anti-tumour immunity induced by therapeutic vaccines. Although the manipulation of T(reg) function is an important goal of immunotherapy, the molecules that mediate their suppressive activity remain largely unknown. Here we demonstrate that Epstein-Barr-virus-induced gene 3 (Ebi3, which encodes IL-27beta) and interleukin-12 alpha (Il12a, which encodes IL-12alpha/p35) are highly expressed by mouse Foxp3+ (forkhead box P3) T(reg) cells but not by resting or activated effector CD4+ T (T(eff)) cells, and that an Ebi3-IL-12alpha heterodimer is constitutively secreted by T(reg) but not T(eff) cells. Both Ebi3 and Il12a messenger RNA are markedly upregulated in T(reg) cells co-cultured with T(eff) cells, thereby boosting Ebi3 and IL-12alpha production in trans. T(reg)-cell restriction of this cytokine occurs because Ebi3 is a downstream target of Foxp3, a transcription factor that is required for T(reg)-cell development and function. Ebi3-/- and Il12a-/- T(reg) cells have significantly reduced regulatory activity in vitro and fail to control homeostatic proliferation and to cure inflammatory bowel disease in vivo. Because these phenotypic characteristics are distinct from those of other IL-12 family members, this novel Ebi3-IL-12alpha heterodimeric cytokine has been designated interleukin-35 (IL-35). Ectopic expression of IL-35 confers regulatory activity on naive T cells, whereas recombinant IL-35 suppresses T-cell proliferation. Taken together, these data identify IL-35 as a novel inhibitory cytokine that may be specifically produced by T(reg) cells and is required for maximal suppressive activity.