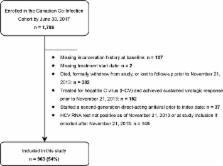 The prevalence of hepatitis C virus ( HCV) is far higher in prison settings than in the general population; thus, micro‐elimination strategies must target people in prison to eliminate HCV. We aimed to examine incarceration patterns and determine whether incarceration impacts HCV treatment uptake among Canadian HIV‐ HCV co‐infected individuals in the direct‐acting antiviral ( DAA) era.

The Canadian Co‐Infection Cohort prospectively follows HIV‐ HCV co‐infected people from 18 centres. HCV RNA‐positive participants with available baseline information on incarceration history were included and followed from 21 November 2013 (when second‐generation DAAs were approved by Health Canada) until 30 June 2017. A Cox proportional hazards model was used to assess the effect of time‐updated incarceration status on time to treatment uptake, adjusting for patient‐level characteristics known to be associated with treatment uptake in the DAA era.

The majority of HIV‐ HCV co‐infected persons had a history of incarceration. Those previously incarcerated were 30% less likely to access treatment in the DAA era even after accounting for several patient‐level characteristics. With SVR rates above 90%, HCV elimination may be possible if treatment is expanded for this vulnerable and neglected group.

Can antiviral therapy for hepatitis C reduce the prevalence of HCV among injecting drug user populations? A modeling analysis of its prevention utility.

The perfect storm: incarceration and the high-risk environment perpetuating transmission of HIV, hepatitis C virus, and tuberculosis in Eastern Europe and Central Asia.

Frederick L. Altice,  Lyuba Azbel,  Jack Stone … (2016)
Despite global reductions in HIV incidence and mortality, the 15 UNAIDS-designated countries of Eastern Europe and Central Asia (EECA) that gained independence from the Soviet Union in 1991 constitute the only region where both continue to rise. HIV transmission in EECA is fuelled primarily by injection of opioids, with harsh criminalisation of drug use that has resulted in extraordinarily high levels of incarceration. Consequently, people who inject drugs, including those with HIV, hepatitis C virus, and tuberculosis, are concentrated within prisons. Evidence-based primary and secondary prevention of HIV using opioid agonist therapies such as methadone and buprenorphine is available in prisons in only a handful of EECA countries (methadone or buprenorphine in five countries and needle and syringe programmes in three countries), with none of them meeting recommended coverage levels. Similarly, antiretroviral therapy coverage, especially among people who inject drugs, is markedly under-scaled. Russia completely bans opioid agonist therapies and does not support needle and syringe programmes-with neither available in prisons-despite the country's high incarceration rate and having the largest burden of people with HIV who inject drugs in the region. Mathematical modelling for Ukraine suggests that high levels of incarceration in EECA countries facilitate HIV transmission among people who inject drugs, with 28-55% of all new HIV infections over the next 15 years predicted to be attributable to heightened HIV transmission risk among currently or previously incarcerated people who inject drugs. Scaling up of opioid agonist therapies within prisons and maintaining treatment after release would yield the greatest HIV transmission reduction in people who inject drugs. Additional analyses also suggest that at least 6% of all incident tuberculosis cases, and 75% of incident tuberculosis cases in people who inject drugs are due to incarceration. Interventions that reduce incarceration itself and effectively intervene with prisoners to screen, diagnose, and treat addiction and HIV, hepatitis C virus, and tuberculosis are urgently needed to stem the multiple overlapping epidemics concentrated in prisons.