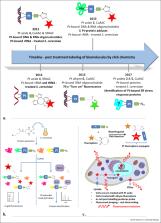 Click chemistry is fundamentally important to medicinal chemistry and chemical biology. It represents a powerful and versatile tool, which can be exploited to develop novel Pt-based anticancer drugs and to better understand the biological effects of Pt-based anticancer drugs at a cellular level. Innovative azide–alkyne cycloaddition–based approaches are being used to functionalise Pt-based complexes with biomolecules to enhance tumour targeting. Valuable information in relation to the mechanisms of action and resistance of Pt-based drugs is also being revealed through click-based detection, isolation and tracking of Pt drug surrogates in biological and cellular environments. Although less well-explored, inorganic Pt-click reactions enable synthesis of novel (potentially multimetallic) Pt complexes and provide plausible routes to introduce functional groups and monitoring Pt-azido drug localisation. 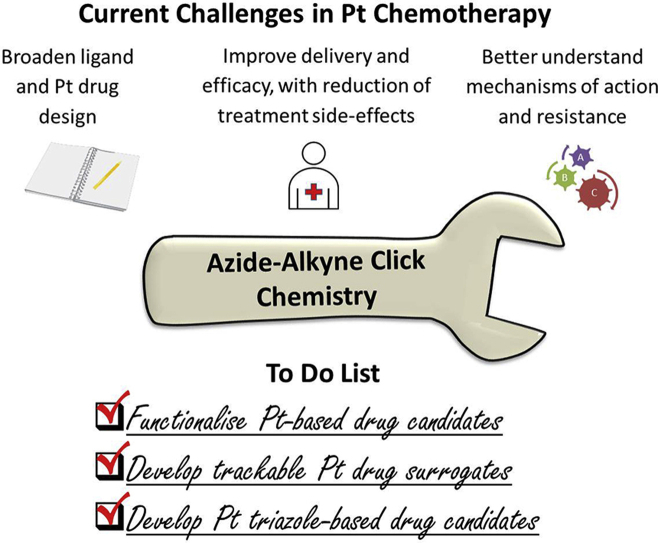 Caspar Christensen,  Christian Tornøe,  Morten Meldal (2002)
The cycloaddition of azides to alkynes is one of the most important synthetic routes to 1H-[1,2,3]-triazoles. Here a novel regiospecific copper(I)-catalyzed 1,3-dipolar cycloaddition of terminal alkynes to azides on solid-phase is reported. Primary, secondary, and tertiary alkyl azides, aryl azides, and an azido sugar were used successfully in the copper(I)-catalyzed cycloaddition producing diversely 1,4-substituted [1,2,3]-triazoles in peptide backbones or side chains. The reaction conditions were fully compatible with solid-phase peptide synthesis on polar supports. The copper(I) catalysis is mild and efficient (>95% conversion and purity in most cases) and furthermore, the X-ray structure of 2-azido-2-methylpropanoic acid has been solved, to yield structural information on the 1,3-dipoles entering the reaction. Novel Fmoc-protected amino azides derived from Fmoc-amino alcohols were prepared by the Mitsunobu reaction.

Systems biology of cisplatin resistance: past, present and future

L Galluzzi,  I Vitale,  Alexander Michels … (2014)
The platinum derivative cis-diamminedichloroplatinum(II), best known as cisplatin, is currently employed for the clinical management of patients affected by testicular, ovarian, head and neck, colorectal, bladder and lung cancers. For a long time, the antineoplastic effects of cisplatin have been fully ascribed to its ability to generate unrepairable DNA lesions, hence inducing either a permanent proliferative arrest known as cellular senescence or the mitochondrial pathway of apoptosis. Accumulating evidence now suggests that the cytostatic and cytotoxic activity of cisplatin involves both a nuclear and a cytoplasmic component. Despite the unresolved issues regarding its mechanism of action, the administration of cisplatin is generally associated with high rates of clinical responses. However, in the vast majority of cases, malignant cells exposed to cisplatin activate a multipronged adaptive response that renders them less susceptible to the antiproliferative and cytotoxic effects of the drug, and eventually resume proliferation. Thus, a large fraction of cisplatin-treated patients is destined to experience therapeutic failure and tumor recurrence. Throughout the last four decades great efforts have been devoted to the characterization of the molecular mechanisms whereby neoplastic cells progressively lose their sensitivity to cisplatin. The advent of high-content and high-throughput screening technologies has accelerated the discovery of cell-intrinsic and cell-extrinsic pathways that may be targeted to prevent or reverse cisplatin resistance in cancer patients. Still, the multifactorial and redundant nature of this phenomenon poses a significant barrier against the identification of effective chemosensitization strategies. Here, we discuss recent systems biology studies aimed at deconvoluting the complex circuitries that underpin cisplatin resistance, and how their findings might drive the development of rational approaches to tackle this clinically relevant problem.