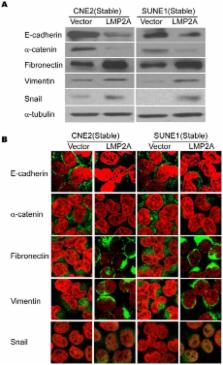 It has been recently reported that a side population of cells in nasopharyngeal carcinoma (NPC) displayed characteristics of stem-like cancer cells. However, the molecular mechanisms underlying the modulation of such stem-like cell populations in NPC remain unclear. Epstein-Barr virus was the first identified human tumor virus to be associated with various malignancies, most notably NPC. LMP2A, the Epstein-Barr virus encoded latent protein, has been reported to play roles in oncogenic processes. We report by immunostaining in our current study that LMP2A is overexpressed in 57.6% of the nasopharyngeal carcinoma tumors sampled and is mainly localized at the tumor invasive front. We found also in NPC cells that the exogenous expression of LMP2A greatly increases their invasive/migratory ability, induces epithelial–mesenchymal transition (EMT)-like cellular marker alterations, and stimulates stem cell side populations and the expression of stem cell markers. In addition, LMP2A enhances the transforming ability of cancer cells in both colony formation and soft agar assays, as well as the self-renewal ability of stem-like cancer cells in a spherical culture assay. Additionally, LMP2A increases the number of cancer initiating cells in a xenograft tumor formation assay. More importantly, the endogenous expression of LMP2A positively correlates with the expression of ABCG2 in NPC samples. Finally, we demonstrate that Akt inhibitor (V) greatly decreases the size of the stem cell side populations in LMP2A-expressing cells. Taken together, our data indicate that LMP2A induces EMT and stem-like cell self-renewal in NPC, suggesting a novel mechanism by which Epstein-Barr virus induces the initiation, metastasis and recurrence of NPC.

Epstein-Barr virus (EBV) infects about 90% of people worldwide and persists benignly as a latent infection. However, EBV is associated with different types of human cancer. Nasopharyngeal carcinoma (NPC) is the most commonly known EBV associated cancer and expresses a well defined set of latent viral genes, including LMP2A, which has been detected in the majority of NPC samples. Several studies indicated this latent viral protein drove cellular invasion and metastasis. For this study, enforced LMP2A expressing NPC cell lines were generated. We show here that LMP2A induces an Epithelial–Mesenchymal Transition and increases the Stem-like Cancer Cells in NPC. Our results suggest that LMP2A supports tumor initiation and recurrence of the infected nasopharyngeal epithelial cells. For the first time we report a virus protein that functions in the initiation and progression of cancer by inducing the cancer stem-like cells. These findings permit a more detailed understanding of function and contribution to viral pathogenesis and provide a novel therapeutic target for NPC therapy.

Simone Spaderna,  Thomas Brabletz,  Thomas Kirchner … (2005)
The dissemination of tumour cells is the prerequisite of metastases and is correlated with a loss of epithelial differentiation and the acquisition of a migratory phenotype, a hallmark of malignant tumour progression. A stepwise, irreversible accumulation of genetic alterations is considered to be the responsible driving force. But strikingly, metastases of most carcinomas recapitulate the organization of their primary tumours. Although current models explain distinct and important aspects of carcinogenesis, each alone can not explain the sum of the cellular changes apparent in human cancer progression. We suggest an extended, integrated model that is consistent with all aspects of human tumour progression - the 'migrating cancer stem (MCS)-cell' concept.

Epithelial-mesenchymal transitions in development and pathologies.

Jean-Paul Thiery (2003)
The epithelial-mesenchymal transition (EMT) is a fundamental process governing morphogenesis in multicellular organisms. This process is also reactivated in a variety of diseases including fibrosis and in the progression of carcinoma. The molecular mechanisms of EMT were primarily studied in epithelial cell lines, leading to the discovery of transduction pathways involved in the loss of epithelial cell polarity and the acquisition of a variety of mesenchymal phenotypic traits. Similar mechanisms have also been uncovered in vivo in different species, showing that EMT is controlled by remarkably well-conserved mechanisms. Current studies further emphasise the critical importance of EMT and provide a better molecular and functional definition of mesenchymal cells and how they emerged >500 million years ago as a key event in evolution.

Transcriptional regulation of nanog by OCT4 and SOX2.

Yu-Leng Lim,  Paul Robson,  Bei Wang … (2005)
Nanog, Sox2, and Oct4 are transcription factors all essential to maintaining the pluripotent embryonic stem cell phenotype. Through a cooperative interaction, Sox2 and Oct4 have previously been described to drive pluripotent-specific expression of a number of genes. We now extend the list of Sox2-Oct4 target genes to include Nanog. Within the Nanog proximal promoter, we identify a composite sox-oct cis-regulatory element essential for Nanog pluripotent transcription. This element is conserved over 250 million years of cumulative evolution within the eutherian mammals. A Nanog proximal promoter-EGFP (enhanced green fluorescent protein) reporter transgene recapitulates endogenous Nanog mRNA expression in embryonic stem cells and their differentiated derivatives. Sox2 and Oct4 interaction with the Nanog promoter was confirmed through mutagenesis and in vitro binding assays. Electrophoretic mobility shift assays indicate that the Sox2-Oct4 heterodimer forms more efficiently on the composite element within Nanog than the similar element within Fgf4. Using chromatin immunoprecipitation, we show that Oct4 and Sox2 bind to the Nanog promoter in living mouse and human embryonic stem cells. Furthermore, by specific knockdown of Oct4 and Sox2 mRNA by RNA interference in embryonic stem cells, we provide genetic evidence for a link between Oct4, Sox2, and the Nanog promoter. These studies extend the understanding of the pluripotent genetic regulatory network within which the Sox2-Oct4 complex are at the top of the regulatory hierarchy.

Publisher ID: 09-PLPA-RA-1725R3
DOI: 10.1371/journal.ppat.1000940
PMC ID: 2880580
PubMed ID: 20532215
Copyright statement: Kong et al. This is an open-access article distributed under the terms of the Creative Commons Attribution License, which permits unrestricted use, distribution, and reproduction in any medium, provided the original author and source are credited.