Mortality From Myocardial Infarction After the Death of a Sibling: A Nationwide Follow‐up Study From Sweden 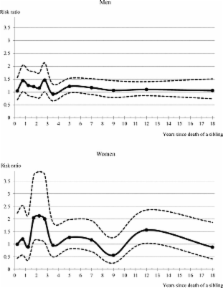 Death of a sibling represents a stressful life event and could be a potential trigger of myocardial infarction (MI). We studied the association between loss of an adult sibling and mortality from MI up to 18 years after bereavement.

We conducted a follow‐up study for Swedes aged 40 to 69 years between 1981 and 2002, based on register data covering the total population (N=1 617 010). Sibling deaths could be observed from 1981 and on. An increased mortality rate from MI was found among women (1.25 CI 1.02 to 1.54) and men (1.15 CI 1.03 to 1.28) who had experienced death of an adult sibling. An elevated rate some years after bereavement was found among both women (during the fourth to sixth half‐years after the death) and men (during the second to sixth half‐years after the death), whereas limited support for a short‐term elevation in the rate was found (during the first few months since bereavement). External causes of sibling death were associated with increased MI mortality among women (1.54 CI 1.07 to 2.22), whereas nonexternal causes showed associations in men (1.23 CI 1.09 to 1.38). However, further analyses showed that if the sibling also died from MI, associations were primarily found among both women (1.62 CI 1.00 to 2.61) and men (1.98 CI 1.59 to 2.48).

Our study provided the first large‐scale evidence for mortality from MI associated with the death of a sibling at an adult age. The fact that findings suggested associations primarily between concordant causes of death (both died of MI) could indicate genetic resemblance or shared risk factors during childhood. Future studies on bereavement should carefully deal with the possibility of residual confounding.

Genetic susceptibility to death from coronary heart disease in a study of twins.

Joel E. Dimsdale (2008)
There is an enormous amount of literature on psychological stress and cardiovascular disease. This report reviews conceptual issues in defining stress and then explores the ramifications of stress in terms of the effects of acute versus long-term stressors on cardiac functioning. Examples of acute stressor studies are discussed in terms of disasters (earthquakes) and in the context of experimental stress physiology studies, which offer a more detailed perspective on underlying physiology. Studies of chronic stressors are discussed in terms of job stress, marital unhappiness, and burden of caregiving. From all of these studies there are extensive data concerning stressors' contributions to diverse pathophysiological changes including sudden death, myocardial infarction, myocardial ischemia, and wall motion abnormalities, as well as to alterations in cardiac regulation as indexed by changes in sympathetic nervous system activity and hemostasis. Although stressors trigger events, it is less clear that stress "causes" the events. There is nonetheless overwhelming evidence both for the deleterious effects of stress on the heart and for the fact that vulnerability and resilience factors play a role in amplifying or dampening those effects. Numerous approaches are available for stress management that can decrease patients' suffering and enhance their quality of life.

Mortality in parents after death of a child in Denmark: a nationwide follow-up study.

This is an Open Access article under the terms of the Creative Commons Attribution Noncommercial License, which permits use, distribution, and reproduction in any medium, provided the original work is properly cited and is not used for commercial purposes.