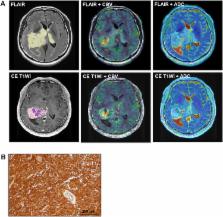 Isocitrate dehydrogenase 1 (IDH1)-wildtype glioblastoma (GBM) has found to be accompanied with increased expression of branched-chain amino acid trasaminase1 (BCAT1), which is associated with tumor growth and disease progression. In this retrospective study, quantitative RT-PCR, immunohistochemistry, and western blot were performed with GBM patient tissues to evaluate the BCAT1 level. Quantitative MR imaging parameters were evaluated from DSC perfusion imaging, DWI, contrast-enhanced T1WI and FLAIR imaging using a 3T MR scanner. The level of BCAT1 was significantly higher in IDH1-wildtype patients than in IDH1-mutant patients obtained in immunohistochemistry and western blot. The BCAT1 level was significantly correlated with the mean and 95 th percentile-normalized CBV as well as the mean ADC based on FLAIR images. In addition, the 95 th percentile-normalized CBV from CE T1WI also had a significant correlation with the BCAT1 level. Moreover, the median PFS in patients with BCAT1 expression <100 was longer than in those with BCAT1 expression ≥100. Taken together, we found that a high BCAT1 level is correlated with high CBV and a low ADC value as well as the poor prognosis of BCAT1 expression is related to the aggressive nature of GBM.

Leif Østergaard,  Robert Weisskoff,  David Chesler … (1996)
The authors review the theoretical basis of determination of cerebral blood flow (CBF) using dynamic measurements of nondiffusible contrast agents, and demonstrate how parametric and nonparametric deconvolution techniques can be modified for the special requirements of CBF determination using dynamic MRI. Using Monte Carlo modeling, the use of simple, analytical residue models is shown to introduce large errors in flow estimates when actual, underlying vascular characteristics are not sufficiently described by the chosen function. The determination of the shape of the residue function on a regional basis is shown to be possible only at high signal-to-noise ratio. Comparison of several nonparametric deconvolution techniques showed that a nonparametric deconvolution technique (singular value decomposition) allows estimation of flow relatively independent of underlying vascular structure and volume even at low signal-to-noise ratio associated with pixel-by-pixel deconvolution.

Maximilian Diehn,  Christine Nardini,  David S. Wang … (2008)
Glioblastoma multiforme (GBM) is the most common and lethal primary brain tumor in adults. We combined neuroimaging and DNA microarray analysis to create a multidimensional map of gene-expression patterns in GBM that provided clinically relevant insights into tumor biology. Tumor contrast enhancement and mass effect predicted activation of specific hypoxia and proliferation gene-expression programs, respectively. Overexpression of EGFR, a receptor tyrosine kinase and potential therapeutic target, was also directly inferred by neuroimaging and was validated in an independent set of tumors by immunohistochemistry. Furthermore, imaging provided insights into the intratumoral distribution of gene-expression patterns within GBM. Most notably, an "infiltrative" imaging phenotype was identified that predicted patient outcome. Patients with this imaging phenotype had a greater tendency toward having multiple tumor foci and demonstrated significantly shorter survival than their counterparts. Our findings provide an in vivo portrait of genome-wide gene expression in GBM and offer a potential strategy for noninvasively selecting patients who may be candidates for individualized therapies.

Daniel L Rubin,  Pattanasak Mongkolwat,  Joel Saltz … (2013)
To conduct a comprehensive analysis of radiologist-made assessments of glioblastoma (GBM) tumor size and composition by using a community-developed controlled terminology of magnetic resonance (MR) imaging visual features as they relate to genetic alterations, gene expression class, and patient survival. Because all study patients had been previously deidentified by the Cancer Genome Atlas (TCGA), a publicly available data set that contains no linkage to patient identifiers and that is HIPAA compliant, no institutional review board approval was required. Presurgical MR images of 75 patients with GBM with genetic data in the TCGA portal were rated by three neuroradiologists for size, location, and tumor morphology by using a standardized feature set. Interrater agreements were analyzed by using the Krippendorff α statistic and intraclass correlation coefficient. Associations between survival, tumor size, and morphology were determined by using multivariate Cox regression models; associations between imaging features and genomics were studied by using the Fisher exact test. Interrater analysis showed significant agreement in terms of contrast material enhancement, nonenhancement, necrosis, edema, and size variables. Contrast-enhanced tumor volume and longest axis length of tumor were strongly associated with poor survival (respectively, hazard ratio: 8.84, P = .0253, and hazard ratio: 1.02, P = .00973), even after adjusting for Karnofsky performance score (P = .0208). Proneural class GBM had significantly lower levels of contrast enhancement (P = .02) than other subtypes, while mesenchymal GBM showed lower levels of nonenhanced tumor (P < .01). This analysis demonstrates a method for consistent image feature annotation capable of reproducibly characterizing brain tumors; this study shows that radiologists' estimations of macroscopic imaging features can be combined with genetic alterations and gene expression subtypes to provide deeper insight to the underlying biologic properties of GBM subsets. © RSNA, 2013.