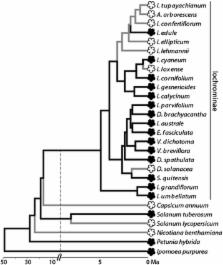 Phenotypic transitions, such as trait gain or loss, are predicted to carry evolutionary consequences for the genes that control their development. For example, trait losses can result in molecular decay of the pathways underlying the trait. Focusing on the Iochrominae clade (Solanaceae), we examine how repeated losses of floral anthocyanin pigmentation associated with flower color transitions have affected the molecular evolution of three anthocyanin pathway genes ( Chi, F3h, and Dfr).

We recovered intact coding regions for the three genes in all of the lineages that have lost floral pigmentation, suggesting that molecular decay is not associated with these flower color transitions. However, two of the three genes ( Chi, F3h) show significantly elevated dN/dS ratios in lineages without floral pigmentation. Maximum likelihood analyses suggest that this increase is due to relaxed constraint on anthocyanin genes in the unpigmented lineages as opposed to positive selection. Despite the increase, the values for dN/dS in both pigmented and unpigmented lineages were consistent overall with purifying selection acting on these loci.

The broad conservation of anthocyanin pathway genes across lineages with and without floral anthocyanins is consistent with the growing consensus that losses of pigmentation are largely achieved by changes in gene expression as opposed to structural mutations. Moreover, this conservation maintains the potential for regain of flower color, and indicates that evolutionary losses of floral pigmentation may be readily reversible.

Evolution by gene duplication: an update

Duplication and divergence: the evolution of new genes and old ideas.

Susan S. Taylor,  Jeroen Raes (2004)
Over 35 years ago, Susumu Ohno stated that gene duplication was the single most important factor in evolution. He reiterated this point a few years later in proposing that without duplicated genes the creation of metazoans, vertebrates, and mammals from unicellular organisms would have been impossible. Such big leaps in evolution, he argued, required the creation of new gene loci with previously nonexistent functions. Bold statements such as these, combined with his proposal that at least one whole-genome duplication event facilitated the evolution of vertebrates, have made Ohno an icon in the literature on genome evolution. However, discussion on the occurrence and consequences of gene and genome duplication events has a much longer, and often neglected, history. Here we review literature dealing with the occurrence and consequences of gene duplication, beginning in 1911. We document conceptual and technological advances in gene duplication research from this early research in comparative cytology up to recent research on whole genomes, "transcriptomes," and "interactomes."