Impact of Air Pollution on Residents' Medical Expenses: A Study Based on the Survey Data of 122 Cities in China 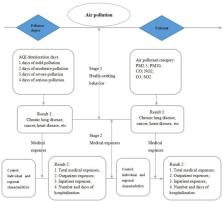 Background: With the development of the social economy, air pollution has resulted in increased social costs. Medical costs and health issues due to air pollution are important aspects of environmental governance in various countries.

Conclusion: In the long run, residents' health in areas with a higher air pollution index, indicating poor air quality, is negatively impacted. The more extreme the pollution, the higher the probability of residents' medical treatment and the subsequent increase in medical expenses. Group and regional heterogeneity also play a role in the impact of air pollution on medical expenses. Compared with the existing literature, this study is based on individuals aged 15 years and above and produces reliable research conclusions.

Evidence on the impact of sustained exposure to air pollution on life expectancy from China's Huai River policy.

Yuyu Chen, Avraham Ebenstein, Michael Greenstone … (2013)
This paper's findings suggest that an arbitrary Chinese policy that greatly increases total suspended particulates (TSPs) air pollution is causing the 500 million residents of Northern China to lose more than 2.5 billion life years of life expectancy. The quasi-experimental empirical approach is based on China's Huai River policy, which provided free winter heating via the provision of coal for boilers in cities north of the Huai River but denied heat to the south. Using a regression discontinuity design based on distance from the Huai River, we find that ambient concentrations of TSPs are about 184 μg/m(3) [95% confidence interval (CI): 61, 307] or 55% higher in the north. Further, the results indicate that life expectancies are about 5.5 y (95% CI: 0.8, 10.2) lower in the north owing to an increased incidence of cardiorespiratory mortality. More generally, the analysis suggests that long-term exposure to an additional 100 μg/m(3) of TSPs is associated with a reduction in life expectancy at birth of about 3.0 y (95% CI: 0.4, 5.6).

On the Concept of Health Capital and the Demand for Health

This article was submitted to Environmental health and Exposome, a section of the journal Frontiers in Public Health